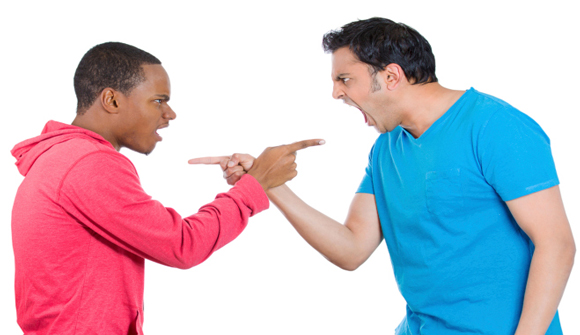 1. Libertarianism cannot eliminate racism from society. This is true. But the demand for a racist-free society is a totally unreasonable demand and cannot be used as a gauge of failure. Racism is an idea, and no political system can remove a thought from society or from man's mind. The most common (and non-libertarian) approach is to punish or confine people who come to the 'wrong' conclusions. That is, to impose thought control. Censorship usually backfires, however, because ideas are like springs; the more force presses down on them, the stronger they become.

By contrast, freedom of speech exposes the ugliness of racism whenever a racist speaks. Freedom of speech offers the only effective 'cure' for a bad idea: namely, a good one. Those who would ban thoughts through government or other force reveal an utter lack of better or good ideas. In fact, they display an intolerance for ideas that is as deep as and more harmful than the intolerance of those they attack for being 'wrong.'

Thomas I. Emerson, a 20th century scholar and advocate of absolute free speech, explained: "It is frequently said that speech that is intentionally provocative and therefore invites physical retaliation can be punished or suppressed. Yet, plainly no such general proposition can be sustained. Quite the contrary…. The provocative nature of the communication does not make it any the less expression. Indeed, the whole theory of free expression contemplates that expression will in many circumstances be provocative and arouse hostility. The audience, just as the speaker, has an obligation to maintain physical restraint."

2. Libertarianism cannot eliminate discrimination on the basis of race. This is also true. But the only way to do so is to strip people of control over their own bodies and property. People who are free to associate with anyone they choose are also free not to associate. Libertarianism demands only that the association is peaceful and that it violates no individual rights. This means a baker can refuse to sell a wedding cake to gays, and gays can boycott him or refuse to provide goods in return. (Libertarian remedies for such discrimination follow shortly.)

Chapter VIII of Omnipotent Government by Ludwig von Mises is entitled "Anti-semitism and Racism." Mises wrote of the oppression of Jews in Nazi Germany from which he fled but the message is identical. He defended peaceful and private discrimination by focusing not on the right of businessmen but on the right of consumers; he referred to free-market discrimination as "consumer's sovereignty." The corollary: businesses had the same right to refuse to sell as consumers had to refuse to purchase.

Mises argued: "In an unhampered market society there is no legal discrimination against anybody…. The consumer is free to discriminate, provided that he is ready to pay the cost. A Czech or a Pole may prefer to buy at higher cost in a shop owned by a Slav instead of buying cheaper and better in a shop owned by a German. An anti-Semite may forego being cured of an ugly disease by the employment of the 'Jewish' drug Salvarsan and have recourse to a less efficacious remedy. In this arbitrary power consists what economists call consumer's sover­eignty."

Libertarian Strategies. If libertarians refuse to use force against 'wrong' thoughts or 'wrong' acts that are peaceful, what can they do? The question is revealing. Anyone whose entering assumption is that government action is necessary for social change believes in controlling ideas and attitudes through violence. Using force has the illusory advantage of a quick fix but it will never create a free, cooperative or stable society. Those who trade liberty for an appearance of non-racism are like those who trade liberty for faux security.

Saying "there ought to be a solution" is entirely different from saying "there ought to be a law." The only solution to racism is by changing the hearts and minds of those individuals who express it. Volume two of Gene Sharp's three-volume The Politics of Nonviolent Action offers 198 non-violent strategies to achieve genuine change. (Sharp himself admits that the tactics are a only partial listing.) The strategies are organized into three categories: nonviolent protest and persuasion, noncooperation and nonviolent intervention. The volumes are replete with historical examples of how they have succeeded.

3. Libertarians are racists. Libertarianism has been labeled "racist" by critics, including by some libertarians from the 'left.' Although a racist libertarian who acts peacefully toward others is not a contradiction in terms, the set of ideas that constitute libertarianism are unlikely to produce or to attract a racist. That set of ideas includes: a stress on individual rights that are universally held by all human beings; a celebration of cooperative society; a demand that the law protect the person and property of everyone equally; a commitment to methodological individualism rather than collectivism… Just as the framework of communism necessitates collective thinking, the framework of libertarianism radically discourages it. Since racism is a form of collective thought, it is naturally alien to libertarians who analyze society first and foremost in terms of individuals.

Other aspects of libertarianism also discourage racism. Two of them are its stress on free commerce and on private property.

One of the most entertaining illustrations of how free commerce creates cooperation between diverse people was offered by the French Enlightenment giant François Marie Arouet de Voltaire in his Letters Concerning the English Nation. In them, Voltaire tried to explain why society in England was so much freer and more tolerant than in France. A key reason was the freedom of English commerce, he concluded.

Commerce created an arena in which diverse people interacted solely for their own benefit, and self-interest provided a strong incentive for each one to ignore the other's religion or skin color. Shopkeepers and customers met over a sale and a purchase, and it was to the seller's advantage to be pleasant in order to secure a repeat customer. To Voltaire, the relatively impersonal nature of the trade was a benefit because the participants did not deal with their personal prejudices but with their own self-interest, which outranked bias. Ironically, the impersonal nature of commerce was a humanizing force in society.

Voltaire even applauded the humanizing effect of that most impersonal of all trading venues: the London Stock Exchange. "Go into the Exchange in London, that place more venerable than many a court, and you will see representatives of all the nations assembled there for the profit of mankind. There the Jew, the Mahometan, and the Christian deal with one another as if they were of the same religion and reserve the name of infidel for those who go bankrupt. There the Presbyterian trusts the Anabaptist, and the Church of England man accepts the promise of the Quaker." Commerce was a glue that held civil society together.

Private property performs a similar function. Only when a person has jurisdiction over himself and his property can he deal with others as a legal equal who needs to bow to no one. Ask a former slave about the importance of controlling his own body and property. Ownership is control not merely of property but of life itself.

In Omnipotent Government, Mises argued: "The essential teaching of [classical] liberalism is that social cooperation and the division of labor can be achieved only in a system of private ownership of the means of production, i.e., within a market society, or capitalism. All the other principles of [classical] liberalism, democracy, personal freedom of the individual, freedom of speech and of the press, religious tolerance, peace among the nations are consequences of this basic postulate. They can be realized only within a society based on private property."

Finally, and in full acknowledgement that a free society would inevitably include some people with racist ideas and attitudes, a key question must be asked. Compared to what? If libertarianism fails the "racism test," then what social organization offers a passing grade? The results do not need to be perfect – they never will be – all they need to be is better than any of the other alternatives. Compared to statism, libertarianism would produce a racist-free paradise.

Racism has been institutionalized and even mandated by states throughout history. It was woven into the first fabric of America through the 3/5ths rule in the Constitution that allowed slave states to count each slave as 3/5ths of a white man for purposes of voting. From black code laws and fugitive slave ones to laws against manumission, the state acted to cement racism into society. Statism, not libertarianism, supported the private individuals who profited from the abomination of slavery. And, then, there was the slaughter of untold native Indians and the herding of survivors into concentration camps called reservations.

The racism of the modern American state runs deep. Jim Crow laws were just that – "laws." During World War II, it was the turn of the Japanese to be herded into camps. And, when the Great Society was declared by President Johnson, it quickly embedded double standards based on race into the law; for example, affirmative action. Even apparently race-neutral measures are implemented in such a manner as to harm blacks disproportionately: gun laws, the war on drugs, police immunity.

Religious wars such as the one raging in the Middle East, genocides such as Stalin's mass murder of the Kulaks, forced famines such as the Great Starvation of Ireland in 1845-1852… Pull the curtain back on any massive, sustained and murderous racism, and the face of the state will be seen.

Yet appealing to a gang of thugs who've left an unbroken trail of blood through history is offered as the solution to a baker who will not sell a cake to gays or an employer who does not want to hire blacks.

Libertarianism cannot deliver utopia because nothing can; human beings are imperfect. A libertarian society will merely will seem like utopia because of what has gone before. The non-aggression principle combined with non-violent tactics is the best possible solution to the problem of racism.