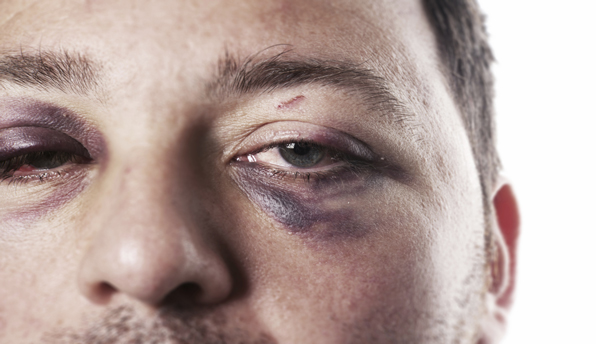 Aggression will occur within every society because it occurs within human nature. Every society needs to have mechanisms of correction to address the inevitable violence – that is, theft, physical assault and the threat thereof.

The State v. the Individual as a Victim of Crime

The mechanism by which the state 'corrects' crime is punishment. Law enforcement and courts act as agents of society against which any crime is said to have been committed; they do not facilitate restitution to the individual victim(s). Of course, society does not exist independently from the individuals who comprise it. And "crimes against society" increasingly morph into "crimes against the state," which are actually acts of disobedience such as resisting arrest or tax evasion. The real victims of real crime are effectively shut out of the justice process.

The libertarian mechanism of correction begins and often ends with restitution. Free market courts, arbitrators or insurance firms (perhaps all three) act to make a victim as close to whole as possible. The focus is on righting a wrong rather than on inflicting pain; it is on the individuals involved.

But, without punishment, what incentive exists for the criminally-inclined to eschew bad acts in the future? If a criminal needs only to give back what he has stolen, what deters him from aggressing again and again in the hope of evading conviction the next time? He can play the odds.

Different answers have been offered. A popular solution is double restitution. The victim receives whatever payment will make him whole, times two. The extra compensation is not merely a practical method of preventing future crime; it can be rooted in rights theory. By stripping another human being of his property, the criminal has forfeited any just claim to the same amount of his own wealth. This is the economic equivalent of "an eye for an eye." If the aggressor cannot provide double restitution, then he could provide services to the victim or otherwise work until the debt was paid.

Such a justice system does not need to rest on natural rights, however. The social reformer Henry S. Salt, who first introduced Gandhi to the work of Thoreau, argued for the equivalent of rights but he based them on human nature instead. He stated, "If men have not 'rights' – well, they have an unmistakable imitation of something very similar; a sense of justice which marks the boundary-line where acquiescence ceases and resistance begins; a demand for freedom to live their own live, subject to the necessity of respecting the freedom of others." In short, men naturally realize it is wrong to inflict a harm on others that they do not wish to be inflicted upon them.

How Can You Restitute Physical Assault?

The solution of double restitution may work in crimes such as theft where making a victim whole is a relatively straightforward matter. But it breaks down when confronted by a victim who has been physically assaulted. In Ethics of Liberty, Murray Rothbard argued, "In the question of bodily assault, where restitution does not even apply, we can…employ…proportionate punishment; so that if A has beaten up B in a certain way, then B has the right to beat up A…to rather more than the same extent." (Note: restitution does apply to physical assault in that the criminal is responsible for the victim's medical bills and other expenses such as time lost from work.)

Only a victim can properly strip a criminal of the same right that was violently yanked from him. The family of a murder victim might be a possible exception and, of course, the victim could assign the task of punishment to an agent. He could also waive the option of punishment and agree to accept a sum of money instead.

If the victim chooses money instead of proportional punishment, how then can a 'just' sum be adjudicated? Is a broken hand worth more than a broken leg? The answer depends on many factors, including who the victim is; a pianist would value his hands more highly. But the sum cannot not be left entirely to the victim who might decide to make a criminal pay in perpetuity for a punch on the nose.

In his New Libertarian Manifesto, the agorist Samuel E. Konkin III (SEK3) sketched a blueprint of how free market courts or arbitrators could adjudicate what he called "restoration."

The first step in restoration, however, is not a court but an insurance company. A customer or someone willing to become a customer goes to Acme Anarchy Insurance Company; someone has physically attacked him. Acme begins to investigate the case. To keep its own costs low, Acme is strongly motivated to be as quick and efficient as possible. This contrasts sharply with the incentives currently offered to state agents whose salaries bear no connection to customer service.

SEK3 writes, "Only…when the matter has been fully contested, investigated and judged, and still B [the aggressor] refuses" to right the wrong committed…"would violence occur….B must now face a competent, efficient team of specialists in [the] recovery of stolen property"or in the redress of harm. Above all, the team would "act so as not to invoke anyone else or harm other's property" in order to avoid additional expense.

Only after adjudication, only after ruling out a private arrangement between victim and criminal does "restoration" occur. SEK3 divided restoration into three parts: restitution, time preference, and apprehension.

Restitution is the return of value or its market equivalent. Time preference refers to the loss of use that a victim incurs due to the violent act. If a broken leg requires three weeks in bed, then the victim is compensated for the inconvenience of not being able to walk for that period even if he loses no time at work. Apprehension "is the sum of the cost of investigation, detection, arbitration and enforcement." These three guidelines define a framework of restoration that reasonably limits the victim but does not encourage the criminal to repeat violent acts.

Libertarian justice needs to be addressed in far greater detail. But all speculation suffers from the fact that a free system of justice would evolve its own norms and conventions. The evolution, like the free market itself, is not predictable.

There are many questions for which I have no pat answers. For example, should ten-time offenders be treated differently than a novice? Every system of justice faces these issues. No system of justice resolves violence in a perfect manner. But libertarianism has the distinct advantage of championing the real victim and attempting to right a wrong, while providing strong incentives against recidivism. It does so without making punishment the first, last, and only solution used.