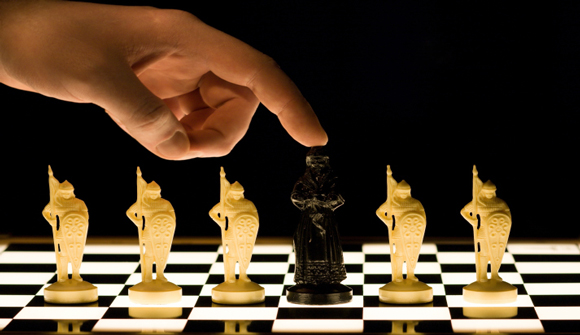 The political sociologist C. Wright Mills (1916-1962) coined a new term, The Power Elite, through the title of his popular 1956 book. The term described the relationships of power between people who occupied leadership positions in three key segments of society: the political, the economic (big business) and the military. This troika of authority shared a common vision and a common goal; they wanted to centralize the power of society under their control.

One challenge to standard interpretation expressed by Mills is that he did not claim the troika of authority were in a conspiracy with each other. Certainly, they had areas of self-interested coordination. But Mills also recognized that the various powers were often uncoordinated and even in conflict.

The departure from conspiracy theory opens an intriguing door of possibility. What if the dynamic of power between the troika occurs in a somewhat unplanned manner? If so, the semi-spontaneous dynamic would not resemble the spontaneous order of the free market or a free society which is touted by Austrian economists. It would be based on coercion against the average person and not on cooperation. This one difference alone makes the power elite the enemy of civil society but it does not reduce the importance of one question. What would semi-unplanned dynamics look like?

Mills was also a post-Marxian leftist who popularized the term "New Left." The New Left emerged in the 1960s as a political movement that veered away from the Old Left by focusing on social issues, such as gay rights, rather than on issues of labor and traditional class structure.

Murray Rothbard urged people to read specific left-wing scholars who were excellent in some of their general insights or on one issue. Rothbard was particularly fond of the institutional analysis presented by various leftists, including Mills. (Note: This does not mean he fully agreed with them but merely that he thought their analysis was sophisticated.) One of Mills's main points is that power is grounded in organizations rather than in individuals or interest groups. Organizations, like the military, were headed by elites who controlled their material resources, including information, and so manipulated power.

Mills concentrated on America's post-WWII institutions that he believed had fundamentally changed as a result of war. He wrote of "a military definition of reality" or a "military metaphysics,"which largely resulted from America's new warlords. By this word, he meant the military elites whose power had swelled in an unprecedented manner and spilled into otherwise civilian realms.

"Since Pearl Harbor those who command the enlarged means of American violence have come to possess considerable autonomy, as well as great influence among their political and economic colleagues….In and out of uniform, generals and admirals have attempted to sway the opinions of the underlying population…to controversial policies….In many of these controversies, the warlords have gotten their way; in others, they have blocked actions and decisions which they did not favor. In some decisions, they have…lost. But they are now more powerful than they have ever been in the history of the American elite; they have now more means of exercising power (in many areas of American life which were previously civilian domains) they now have more connections; and they are now operating in a nation whose elite and whose underlying population have accepted what can only be called a military definition of reality…"

The most dramatic expression of post-war "military metaphysics" had come in the area of American foreign policy. Earlier in American history, international relations had been the province of diplomats and negotiation, with war – when declared – being the province of the military. The post-WWII world, however, had declared an indefinite Cold War, and it was "seemingly total and seemingly permanent." It was a world in which "[p]eace is no longer serious; only war is serious. Every man and every nation is either friend or foe, and the idea of enmity becomes mechanical, massive, and without genuine passion."

When diplomacy aimed at resolving conflict was seen as "appeasement" or unpatriotic treason, then there was no "active role" for the diplomat. And "diplomacy becomes merely a prelude to war or an interlude between wars" because "the diplomat is replaced by the warlord." The reason? Because officials fear peace much more than war. Power elites across the board – political, economic and military – are dependent upon the war economy and the international status it provides to the U.S.

The Balancing Act of the Triumvirate Power Elite

Mills focused on the dominant powers within the globally-dominant United States, which affected "the underlying populations of the world." Basically, the troika consisted of:

The three are often in conflict. Even though power tends to be inherited through prominent families, such as the Kennedys, or through elite experiences, such as attending Ivy League universities, this did not guarantee a confluence of personal interest among factions of the power elite. Mills observed, "Harvard or Yale or Princeton is not enough … the point is not Harvard, but which Harvard?" The stakes are high and the competition for dominance within the elite is fierce.

What would semi-unplanned dynamics look like? From his Cold War perspective, Mills answered that the military arm of the troika had become dominant. America was now defined in terms of military reality, a military metaphysics. He wrote: "Within the span of one generation, America has become the leading industrial society of the world, and at the same time one of the leading military states. The younger military are … growing up in the atmosphere of the economic-military alliance, but more than that they are being intensively and explicitly educated to carry it on. 'The Industrial College of the Armed Forces,' concerned with the interdependence of economy and warfare, is at the top level of the military educational system."

An indication of military dominance is that "[s]cientific and technological development has increasingly become part of the military order, which is now the largest single supporter and director of scientific research in fact, as large, dollar-wise, as all other American research put together. Since World War II, the general direction of pure scientific research has been set by military considerations, its major finances are from military funds, and very few of those engaged in basic scientific research are not working under military direction."

Mills referred to the alliance of the military, economics and technology as "ironic" because most nineteenth century liberals had assumed that the rise of industry would mean the decline of the military. Instead, according to Mills, the rise of industry has led to its usurpation by the military. "The economy has become concentrated and incorporated into great hierarchies, the military has become enlarged and decisive to the shape of the entire economic structure; and, moreover, the economic and the military have become structurally and deeply interrelated, as the economy has become a seemingly permanent war economy and military men and policies have increasingly penetrated the corporate economy."

There is much to disagree with in Mills's analysis but he inspires thought and, in the end, that may be a more important process than agreement. On one point, Mills is entirely correct, however. The power elite is united in their determination to retain the financial and political submission of the "masses" on whom they feed. They unite on this point even if they squabble about the division of power and loot among themselves.

On one point, Rothbard remains eternally correct. Libertarians should read the best of the left because the 'opposition' is correct on many specifics. Nothing compares to scholars like Mills or the historian William Appleman Williams for offering a fresh perspective.