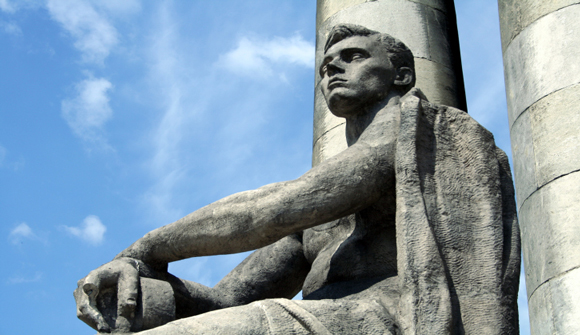 Obamacare's failure to enlist young people into its ranks may well result in an American version of the New Soviet Man. That man was the communist ideal of a person who served the state and its leader with selfless devotion.

White House advisor Dr. Ezekiel Emanuel has been called the architect of Obamacare, the Insurance Salesman-in-Chief and the Health Rationer-in-Chief. His brother, Rahm Emanuel, is the current mayor of Chicago and a former chief of staff to Obama. In short, Ezekiel Emanuel is a man of considerable influence within the administration, and his voice can be assumed to carry the straight line on Obamacare.

Clearly, the administration has worried for some time about the prospect of young people shunning the health care plan. On May 6th, Emanuel addressed the possibility in a Wall Street Journal (May 6) editorial entitled "Health-Care Exchanges Will Need the Young Invincibles." Emanuel acknowledged that Obamacare needs a constant glut of young and healthy people buying insurance in order to finance the medical demands of the old and unhealthy. That's the way Ponzi schemes work.

The administration's worries have materialized. From early indications, most Obamacare enrollees are older than 50 and many have pre-existing medical conditions. Young people apparently prefer to pay a comparatively small tax penalty rather than enlist in expensive insurance they don't need; for example, single men who enlist in Obamacare will receive maternity coverage, whether or not they want it. An insurance pool consisting of the least healthy people makes medical costs and premiums soar. In turn, this further discourages the healthy from buying in. Emanuel's editorial anticipated the nightmare scenario. The solution he sketches is most likely the White House's contingency plan.

First, Obamacare needs to conduct "a sustained campaign" on platforms that most appeal to the young. Accordingly, the administration has approached various sports organizations and teams about marketing Obamacare. For example, the Baltimore Ravens baseball team is being paid $130,000 to promote the scheme. An assortment of federal agencies have signed contracts worth more than $60 million with mega PR firms Weber-Shandwick and Porter-Novelli to launch a blitz campaign on social media such as Facebook, through popular channels such as ESPN and through scripts promoting Obamacare on popular TV shows. Comedian Conan O'Brien suggested the perfect vehicle would be "The Walking Dead."

Second, the administration needs to appeal to young people's faith in Obama. Emanuel wrote, "young people believe in President Obama….he needs to use that bond and get out there to convince them to sign up for health insurance to help this central part of his legacy." He continued, "During the last election, President Obama showed that he could use data to identify and mobilize young people. Come the fall, he and his administration need to turn these skills to motivate young Americans to do more than vote — and get insurance." Young people's patriotic devotion to Obama and to his legacy needs to be mobilized to outweigh their own self-interest.

Third, Emanuel stressed, "we need to make clear as a society that buying insurance is part of individual responsibility….The social norm of individual responsibility must be equated with purchasing health insurance." The reason? After gutting the ability of people to privately pay for their own care, Emanuel disingenuously accused the uninsured of "free-riding on others." Thus, as a matter of civic duty, the young and healthy need to contribute selflessly to the collective good of subsidizing the elderly. (This is in addition to the tax-money used to subsidize lower-income policyholders.)

A term comes to mind: the New Soviet Man. In Literature and Revolution, Leon Trotsky wrote of the new human being who would be created by communist social conditions. The New Man would "master his own feelings, to raise his instincts … to create a higher social biological type, or, if you please, a superman." The "higher social biological type" would be selfless in his personal sacrifice for the collective good. In his poem Vladimir Ilyich Lenin, the Soviet Vladimir Mayakovsky stated of the now-obsolete individual, "A '1' is nonsense. A '1' is zero." Instead, the New Soviet man expressed undying devotion to the state and to Stalin, under whom the quest for the ideal communist human being reached a zenith.

To promote the implausible New Soviet Man, a massive cultural campaign was launched. Russian celebrities lauded the ideal man who was embedded into fiction and film. A stylized Soviet art emerged with paintings and sculptures reflecting selfless workers staring up and off into the glorious future.

What happened to those who did not express blind loyalty to the leader and who chose their self-interest over the collective good? They became class enemies and Stalin's wrath was boundless. Consider the kulaks – Russian peasants who owned farms. They resisted the confiscation of crops and the collectivization of their land. In December 1929, Stalin announced the liquidation of the kulaks. No one knows how many died through execution, deportation to Siberia or planned starvation. Estimates vary between 6 and 10 million. They died because their actions did not reflect the New Soviet Man. They died because their behavior expressed human nature instead – that is, they acted on self-interest to preserve the products of their labor for the benefit of their own families.

In short, the New Soviet Man strategy consisted of:

All that is missing from Emanuel's blueprint is the punishment. If America's youth does not live up to Emanuel's version of the New American Man, they will not suffer the carnage of the kulaks. No one is suggesting that. But something will be done. And, with government, "something done" always means coercion, even if it comes in the disguised form of an incentive that someone else needs to fund. Obama will not allow his signature legacy to become a signature failure.

The extraordinary website problems attending Obamacare may be good news for its advocates. It distracts attention from what could be a far less solvable problem. Young people are not sinking their money into a scheme to benefit the insurance industry and the elderly for whom they are bled dry by programs like Social Security. Instead, young people are acting in accord with what has been tried and true human nature through recorded history: self-interest.

This is the true fatal flaw of Obamacare. The scheme requires those upon whom it depends to abandon their own self-interest in order to further the collective in the name of the Glorious Leader's legacy.