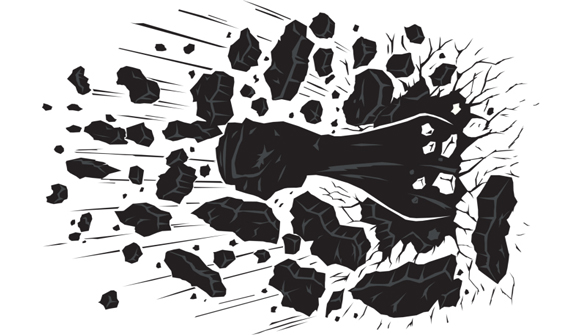 EDITORIAL
The Free Market Kicks It Some Ebola Ass
By Wendy McElroy - October 30, 2014

The Ebola hysteria raises questions about how a free society would handle contagious diseases. Critics of freedom argue: libertarian principles, like the right against involuntary confinement, means that half the people on the planet could literally die from a lack of centralized state control. Left to their own devices, average people cannot solve their own problems.

The opposite is true. In writing of quarantine policies, the economist Robert Murphy astutely observed, "In a free society where pieces of property are all assigned ownership to specific individuals, there would be no such thing as a person having his 'right to walk around' revoked — because there's no such thing as a 'right to walk around' in the first place." Property owners would decide. Only because government usurps this decision do airlines 'need' a concerted policy or state approval on whom to transport. "In a free society, to be 'quarantined' would simply mean that most owners (of roads, sidewalks, malls, hotels, factories, etc.) would refuse access, and so a contagious person would have few choices outside of treatment facilities."

Yet appeals to government ring out. Never mind that it is the biggest Keystone Cop in the room, at least, if that room is America. But it is futile to merely lambast state blundering. It prompts cries for more tax money, more control. The best way to explain how freedom would handle Ebola is to point to examples of where and when it has done so. And done it incredibly better than government.

Firestone, "where the rubber meets the road"

A headline in Medical Daily (Oct. 13) declared, "Firestone Keeping Ebola Away From Employees In Liberia Through Low-Tech Intervention Program." The article asks and answers the question, "In a country where cases of Ebola are doubling every three weeks, how exactly has Firestone Liberia withstood the viral storm?" The town employed by the tire company is free of ebola except for outsiders who migrate in for treatment. It wasn't always that way.

Firestone Tire & Rubber Company founded a factory in the Liberian town of Harbel in 1926. The town was named after Harvey and his wife Idabelle Firestone. The current population is estimated at 25,500 with approximately 8,000 working for the company. (NPR claims that "Firestone workers and their families make up a community of 80,000 people," presumably including surrounding towns.) Sanitation and infrastructure is unusually good by Liberian standards because Firestone built and maintains a hydroelectric power plant, roads, schools, a telephone system… But the enhanced living conditions are only part of why Firestone succeeded with Ebola where so many governments have failed.

The first case arrived on the company doorstep on Sunday, March 30. The wife of an employee was diagnosed. The managing director, Ed Garcia, tried to find a hospital that would take the woman but none would accept her. As he said, "[W]e quickly realized that we had to handle the situation ourselves." By the next day, the company's medical team had set up a primitive but effective clinic using storage containers for quarantine and plastic wrap to contain the infection. By Tuesday, the woman was in voluntary isolation under the constant care of medical personnel who wore hazmat suits intended to deal with chemical spills. The woman died. But no one else – including her family – became infected.

Four months passed. The company's measures ensured there were no more outbreaks. But, in a nearby city, Ebola was rampant and the ill flocked to the several clinics now established by Firestone. The flow began in August and the facilities were filled by mid-September. Firestone converted the schools that had been closed by government decree into quarantine areas. It sent local teachers from door to door to discover who was ill and to provide information. Janitors were taught how to properly bury the dead. In all, approximately seventy-two cases were documented with 18 people surviving treatment. Hundreds were isolated. NPR reported (Oct. 06), "As of this weekend, however, only three patients remained: a trio of boys age 4, 9 and 17." All the boys came from outside the Firestone community. This means, "even as the worst Ebola outbreak ever recorded rages all around them, Firestone appears to have blocked the virus from spreading inside its territory."

The secrets of Firestone's success? One is speed. The company acted immediately to prevent contamination. Another is a constant monitoring of patients and the isolated; agricultural surveyors used their talents to map the spread of infection. Another is very, very basic medical care such as ensuring people do not become dehydrated. Added to the mix was "voluntary" quarantine; those who suspect they are ill do not avoid seeking a treatment that would resemble a prison sentence.

Firestone approached Ebola in a free-market manner: it responded quickly, it monitored changing circumstances, it took care of the basics, first and foremost, and all interactions were voluntary. The company may have more organizational skill and money per capita than does the Liberian government; that advantage cannot be dismissed. But what excuse does the U.S. government have?

Forced Quarantine Based on Politics, Not Science

Much of the medical profession also favors the lifting or lightening of mandated quarantines. On October 17, the nongovernmental Doctors Without Borders (Médecins Sans Frontières, MSF) issued a statement that condemned the practice for discouraging volunteers. "Forced quarantine of asymptomatic health workers returning from fighting the Ebola outbreak in West Africa is not grounded on scientific evidence and could undermine efforts to curb the epidemic at its source …." Dr. Joanne Liu, international president of MSF, stated, "We need to be guided by science and not political agendas."

It should also be guided by the free market. What's the difference in approach? The Wall Street Journal (Oct. 06) explained: "As Liberian senators argued about whether Ebola was a scam to solicit more foreign aid, Firestone quietly built its own corporate health infrastructure. It converted pickup trucks to ambulances. Firestone's company police, normally tasked with chasing rubber thieves, were given orders to enforce a 'No Visitors' policy." The article continued: "The heads of payroll, maintenance and special projects created an Ebola war room, where they field calls from nervous workers living in the forest. The in-house radio station broadcasts interviews with survivors, who entertain their fellow employees with stories of their ordeals." While politicians argued about funding, people took care of themselves.

When asked how to turn around the Ebola crisis in West Africa, Dr. Brendan Flannery – head of the U.S. Centers for Disease Control – answered, "More Firestones." I would add, "Less Government"…as in "none."

UPDATE: Recent criticisms of Firestone claim the company is now turning away Ebola cases that are not connected to employees. I don't know the truth or circumstances in the wake of so much publicity being shone on the company. But the criticism is unfounded. Firestone should be applauded for providing a successful model of containing contagion instead of being condemned for not acting as something it never claimed to be. Namely, a charity that functions indefinitely at no profit. Or, worse, a government agency that purports to serve "the public" while acting solely in its own interests.