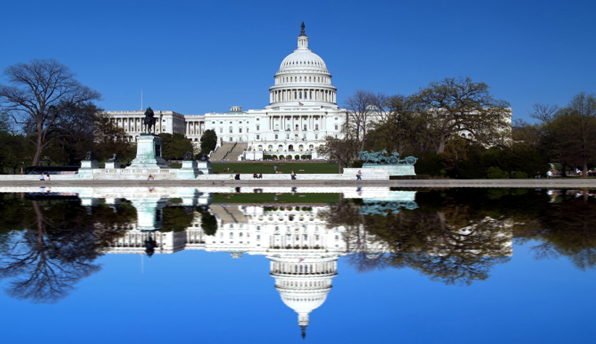 EDITORIAL
The Most Influential Man You Haven't Heard Of
By Wendy McElroy - May 08, 2014

One man has answered the question, "How much does it cost to buy the U.S. Senate?" The price tag and his name came to light as the only plausible explanation for an otherwise inexplicable event.

Two months ago, an even more bizarre spectacle than usual took place on the Senate floor. From the evening of March 10th through to the next morning, about 30 Democratic senators held a 14-hour+ speechathon. The event was billed as an attempt to push America into addressing "climate change." Translation: It was meant to publicize measures that would rectify so-called 'global warming' and protect against environmental 'threats' such as the oil and gas industries.

The spectacle was surreal on several levels:

The senior political editor at Townhall, Guy Benson, suggested an inspirational chant the Senators could use at their next speechathon:

What do we want?

– Non-specific action from ourselves!

When do we want it?

The March talk-a-thon was widely trashed in the media as pointless political theatre in which the name of Hitler was invoked after only five hours. Specifically, Senator Angus King of Maine likened climate change activists to those who warned against the rise of Nazi Germany in the 1930s. King then spring boarded into a discussion of how unheeded climate warnings were affecting lobsters and other crustaceans off the coast of his state.

Perhaps knowing how vacuous the spectacle appeared, the Senators tried to make it trendy by hashing the event on twitter as #Up4Climate. That was a mistake. Twitter was quickly flooded with derisive comments and mock hashtags. Among the ones featured on the satire site Twitchy were:

The Man Who Bought the Senate

What motivated the Democratic Senators to protest the non-action of a body they control on an issue for which they proposed no remedy? Follow the money. In an article entitled "What the Senate's All-Nighter on Climate Change is Really About," the Washington Post (March 10) explained:

"Environmental groups spent about $20 million on ads and other activities to help Democrats in 2012 and gave about $742,000 directly to candidates during the cycle, according to the Center for Responsive Politics…"

The environmental dollar will be even more important in the 2014 races. For example, the League of Conservation Voters is actively running ads to promote Democratic Senator Brian Schatz of Hawaii in a highly contested race. Schatz was a primary organizer of the speechathon.

And, then, there is the one man who bought Congress for a night: the leftwing billionaire businessman and environmentalist Thomas Steyer. He has been called the most influential man in America with whom next to no one is familiar. Steyer reportedly directed more than $11.1 million into two super PACs (political action committees) in order to help Virginia's Democratic Gov. Terry McAuliffe and Senator Ed Markey. Steyer contributed $8 million to McAuliffe's campaign for one reason alone; he wished to make an example of the governor's rival, Republican Ken Cuccinelli, who is a notorious skeptic on global warming. And Steyer isn't shy about hitting below the belt. For example, during a pre-election football game between the University of Virginia and Brigham Young University, he hired an airplane to fly a banner reading "Cuccinelli Says Go BYU" over the stadium.

PACs, such as those founded by Steyer and former NYC-mayor Bloomberg, are increasingly defining American politics. A political action committee is an organization that can legally raise an unlimited amount of money from entities such as corporations and individuals; it is not supposed to contribute to or to cooperate directly with a specific party or candidate. The Center for Public Integrity called Steyer's two super PACS "the latest iteration … [in] the single-issue vanity super PAC – a group backed by a single, wealthy donor focusing on an issue of national importance, such as climate change or gun violence." For 2014, Steyer has announced plans to use his advocacy group, NextGen Political Action, to funnel about $100 million into the campaigns of Democratic congressional candidates.

The Washington Post continued its commentary on Steyer: "He's quickly emerged as a new and much-needed source of campaign money for Democrats eager to find ways to match the rise of conservative donors who are using new super PACs to spend millions of dollars attacking congressional Democrats on the airwaves … Steyer hosted a recent fundraiser at his San Francisco home that netted the Democratic Senatorial Campaign Committee $400,000 and where Senate Majority Leader Harry M. Reid (D-Nev.) and the six other Democratic senators in attendance openly discussed plans for …[ the] talkathon, according to reports."

In other words, the speechathon was planned at the billionaire's home in Reid's presence. The uber-influencial Reid is the same Democratic Senator who lambasted the billionaire Koch brothers for their donations to Republican causes and campaigns. On March 10, the Business Insider reported Reid as stating, "I'm trying to find a Republican – somebody, anybody – who will raise an objection to two brothers trying to buy America." Apparently, Reid wants only the Senate to be up for sale, and only to a Democratic buyer.

How Much Did it Cost … Steyer and the Democrats?

So what was the Senate's price tag? Let's see … the talk-a-thon reportedly lasted 15 hours. With the dangled pledge of $100 million to Democrats, Steyer was able to buy (or rent) the floor of the Senate at a rate of $6 million an hour. I agree with the twitterer who wrote, "Who says Congress is broken?" The fact that someone is willing to pay $6 million an hour for it is a clear free-market sign of its worth. Correction: This has nothing to do with the free market.

One of the political costs is less visible. Steyer may be causing a deep schism within the Democratic Party itself.

The CNN Political Ticker (March 11) offered an explanation of why some powerful Democratic Senators were absent from the much-vaunted speechathon. The only political currency that can offset cold cash is the prospect of winning or losing the popular vote. Instead of following the money, some Senators followed the popular path. The Political Ticker astutely observed: "Sen. Mary Landrieu, the new chairman of the Senate Energy and Natural Resources Committee, was noticeably absent from the demonstration … The vulnerable Democrat [Landrieu] faces re-election this fall in Louisiana, a state with large swaths of conservative voters." Landrieu is particularly vulnerable because her home state of Louisiana depends so heavily upon the oil and gas industries. Election weakness was a common theme among the Democratic Senators who were no-shows and so got a good night's sleep instead.

How Much Does the President Cost?

Political commentary sites are openly speculating on whether Steyer can buy Obama's final decision on the Keystone XL Pipeline, which would supply vast quantities of Canadian oil to the U.S. The project has strong bipartisan and public support; even two lengthy environmental analyses by the State Department couldn't point to any major environmental impact. Nevertheless, as the Sunshine State News (Fla., April 25) reported: "Never mind the Kochs. After assessing who did what bad to America lately, I nominate Tom Steyer for the top of the list. Last week the billionaire hedge fund manager from San Francisco bought off the White House to the tune of $100 million in order to delay the Keystone XL pipeline decision." (Note: Steyer retired some while ago from the hedge fund business.)

Predictably, Landrieu broke Democratic ranks to castigate the delay. She called Obama's decision "irresponsible, unnecessary and unacceptable" – a move to satisfy extreme radicals while sacrificing 42,000 jobs and billions from the economy. Other Democrats, such as Sen. Mark Begich of Alaska, joined her.

The man who bought the Senate floor, the man who bought Obama … Thomas Steyer may also become the man who thwarted Keystone and drove Canadian oil toward China. If he fractures the Democratic Party, however, he may cost them more than he can deliver.