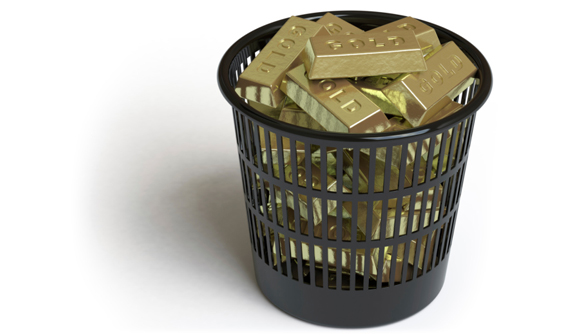 Gold's decline shakes the true believers' faith … The dramatic slide in the price of gold in the past week has reversed a rise that for more than a decade has been steady and seemingly inexorable. The sudden fall in which prices plummeted 9 percent, to $1,347.40 an ounce, on Monday, the biggest two-day loss percentage since 1983 – has put goldbugs, who are by definition pessimistic lovers of certainty, into a state of high anxiety. When the commodity of last resort so conspicuously fails to hold its value, the world becomes scarier place. There is room, however, for a small celebration: that the Cassandras have been caught short. Their simple remedy of faith in the abiding value of gold as a hedge against an otherwise treacherous, inflated market has been shown to be flawed. – Reuters blog

Free-Market Analysis: In this issue we've already written one analysis of a central banking meme showing just how deliberate certain monetary promotions are. The globalists who run them and place them in the mainstream media are doing so with full knowledge of their falsity – and are thus doing so maliciously, in our humble view.

This (see above excerpt) is just such an article in the sense that it is a full-bore promotion, promoting fiat money and opposing gold-as-money. Not only that, but the tone itself is revealing. It is a kind of gloating tone, though we don't know why someone would gloat over a weakening of the gold price (in terms of fiat) unless he or she planned to buy more.

The author of this editorial makes it clear he doesn't intend to buy more. He sees no redeeming value for gold and is of the mind that both gold and silver are useless metals. Here's a longer excerpt:

There have always been those who have advocated cashing out and putting everything into gold against the day the stock market crashed, though the number of investors who genuinely found refuge in gold when the market crumbled in 2008 is probably fewer than goldbugs would like to admit. "

The flight to gold over the past dozen years has attracted a new form of ardent absolutist who suspects the Federal Reserve and the Treasury do not know what they are doing and who believes quantitative easing to be an evil process that invites inflation. These ideologically driven gold stashers are closely related to, indeed are often the same people, as those who advocate the return of the dollar to the gold standard.

Such nervous creatures can only be reassured by the ancient lure of gold as a rock-solid reserve. For the past 12 years the rising gold price has appeared to confirm their lack of confidence in Keynesian manipulations of the economy. Since August, however, when gold started to lose its value, something has gone badly wrong.

It really doesn't matter why gold has lost its glister, whether it is because troubled banks like the Bank of Cyprus are contemplating selling off all their gold to satisfy their country's creditors while flooding the market in gold, or because of a general readjustment in all commodity prices, gold included.

Gold's fall shows that it is no different from other, more mundane commodities and that its special quality, an unimpeachable promise of retaining its value through the most turbulent of markets, is a myth. The market in gold is tossed by the same concoction of rumor, whimsy and conflicting signals as any other market. The difference is that the practical uses of gold — except as jewelry and in some industrial applications — are strictly limited.

It is a little difficult to unpack the amount of misinformation contained above. Gold, and silver, too, have been seen as valuable not just for millennia but perhaps for tens of thousands of years. Supposedly, 100,000 year-old gold mines have been found in South Africa.

But even if gold and silver were monetized far more recently than that, to call those who are purchasing and holding money metals "nervous creatures" seems a bit, well … hyperbolic.

The article also informs us that it doesn't matter "why gold has lost its glister." But from an investment standpoint, it certainly does. The securitization of gold means that there are a great many holders of paper gold and also that it is likely easier than ever to sell short, illegally or not.

With so much "paper" in the market, the price of gold (and silver) are perhaps being determined as much by paper manipulation as demand for the physical.

In fact, we can see from what has happened that the gold market (or its "prices") are clearly detached from what is happening in the physical market. Jewelry is no less expensive today than yesterday. And there is apparently little or no physical product to be had, even within major market centers. Meanwhile, demand from China, India and other metals-loving countries remains strong.

If demand for physical gold and silver is strong, if gold and silver are in scarce supply and if jewelry prices have not gone down, then how is it that the price of gold has dropped over US$200 in only a few days? Leave aside outright manipulation, there is still something in this scenario that doesn't add up.

But let us hasten to add what is obvious … that there are powerful forces at work here. There are many – like the author of this article – who clearly despise gold and gold ownership because it is a direct rebuke to central banking, fiat money and increased globalization.

Indeed, there is a war on between opposing philosophies and visions of the future, from a sociopolitical and economic standpoint. Gold and silver are warriors in this fight.

One could certainly venture that gold has been wounded. And beyond this that the yellow metal – having been injured – will be a long time recovering. If that is the case, and equity and fixed income markets remain strong, then certainly some investors will consider that "fighting the trend" is not an optimal option.

One can make all sorts of arguments as to why equity is overpriced and why bonds are headed for a crash (and we have) but if wealth is being derived from these instruments then those arguments may fail to convince to one's wallet.

The Internet Era has brought many issues into stark visibility. One of the most important and high-profile is this struggle between the golden bull and controllers of fiat money. One doesn't necessarily have to choose between them but one certainly ought to understand the subterranean struggle that is being waged.

As we have written before, there are no easy answers. But better to comprehend the dilemma than to remain oblivious to it.