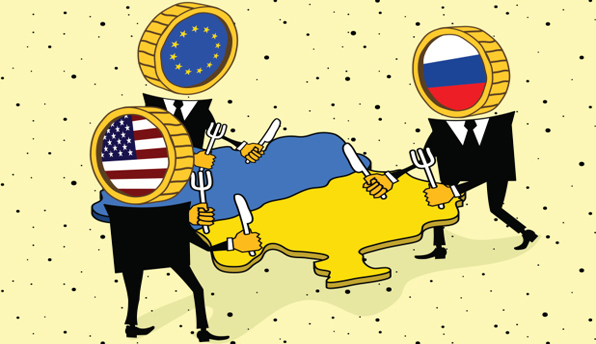 EDITORIAL, Gold & Silver
The Volatility of War, the Promise of Gold
By Anthony Wile - April 26, 2014

AP is reporting that Ukraine fears Russian invasion. The fears were apparently expressed by Ukraine's deputy foreign minister. "We have the information we are in danger," Danylo Lubkivsky told reporters at the United Nations, according to AP.

The escalation in rhetoric came as "pro-Russian forces detained a team of military observers with the Organization for Security and Cooperation in Europe."

While all this sounds ominous, I have trouble believing this confrontation is going to end in Armageddon.

More on that in a minute.

There's really no side to root for here. Russians are running Crimea and the West is apparently helping to run the rest.

Here's more from the AP:

Tensions have spiked as Russia increases military exercises along the Ukraine border. Lubkivsky called it a "very dangerous development" and demanded that Russia withdraw its troops.

"We are going to protect our motherland against any invasion," Lubkivsky said. "We call on the Russians to stop this madness."

Stephane Dujarric, spokesman for the U.N. secretary-general, told reporters earlier Friday that Ban Ki-moon had been reaching out to both countries. "I think we all have to realize here that the stakes are extremely high, with potential negative implications for peace and security that extend far beyond the eastern Ukrainian cities," Dujarric said.

Okay, maybe US officials should have thought of that before they dumped some billions into Ukraine to encourage "democracy." Or before a State Department official was recorded aiming an obscenity at the EU while instructing Ukraine officials on an interim political boss.

This is not the first destabilization that the US has been involved with in the past decade or so. Recently it was reported that the Pentagon received notice from Saddam Hussein and from the Taliban that war would not be necessary. Hussein was willing to leave Iraq before any military action and the Taliban were apparently willing to go quietly as well.

It was the Bush administration that refused to entertain the notion, apparently – and thus the US was reportedly thrust into two wars that didn't have to happen.

And then there is the evident and obvious involvement of the State Department and the CIA in the "youth movements" that have destabilized Tunisia, Egypt, Libya and now Syria. In Libya and Syria, US officials have even apparently made common cause with Al Qaeda in order to achieve military and political objectives.

And what are those objectives? In the case of almost every single "revolution," an Islamic regime has been empowered; and this is not something new. The US has been supporting Saudi Arabia and its Islamic fundamentalists for decades.

Here's the point: A globalist strategy inevitably entails a dialectic. If you want to promote certain results, you need to have TWO sides.

Thus, Western elements are creating religious tensions in Africa and the Middle East; these same groups want to create military and monetary tension between the West and the BRICS, especially Russia and China. These tensions probably have more to do with creating a full-fledged, global monetary system than anything else.

A full-fledged war on the other hand is probably not going to support such a strategy. Tension, yes. A world war, no. In fact, the impact of all this maneuvering is probably going to be more economic than military.

And so we note that gold is up, as News.com.au reported:

GOLD prices have risen to a one-week high as intensifying conflict between Russia and Ukraine renew investor interest in protective assets.

Gold for June delivery, the most active contract, on Thursday rose $US6, or 0.5 per cent, to settle at $US1,290.60 a troy ounce on the Comex division of the New York Mercantile Exchange. This was the highest settlement since April 17, when futures closed at $US1,293.90 an ounce.

Gold prices have swung between gains and losses in recent weeks, following the waxing and waning of diplomatic friction between Russia and Ukraine. Some investors consider gold as a safe place to store their wealth during periods of political upheaval.

On Thursday, gold rocketed higher after Russia announced plans to hold military exercises, including air operations, near the Ukrainian border. The decision comes in response to clashes between pro-Russia militants and Ukrainian forces in Eastern Europe.

Gold futures had posted losses throughout the night, but "the news out of Russia caused the market to go up $US30 in a matter of a few minutes," said Bob Haberkorn, a senior market strategist with RJO Futures in Chicago.

"You do have safe-haven demand coming back into the precious metals market, we're seeing it here," Haberkorn added.

Now, the chances are that the power elite does not want the dollar to fall against an ounce of gold, but there are other priorities at work here. Thus, additional tension may create asset class opportunities in a variety of markets.

We've often observed that a Wall Street Party is on the agenda, but given what's occurring as a result of military tension, holding precious metals and perhaps even mining stocks becomes potentially profitable as well.

Central banks continue to print huge amounts of money – perhaps some US$50 trillion since 2008 – and given the increasingly tense global environment, various kinds of volatility will surely continue to increase.

So welcome to the 21st century where so much of what takes place militarily and economically has to do with expanding globalism – and thus understanding elite dominant social themes is more important than ever.

We track those themes regularly and are now even developing business opportunities around them. So check here regularly to find out what we're observing. Maybe you'll find something interesting …

Certainly, the world is getting more "interesting" by the day!