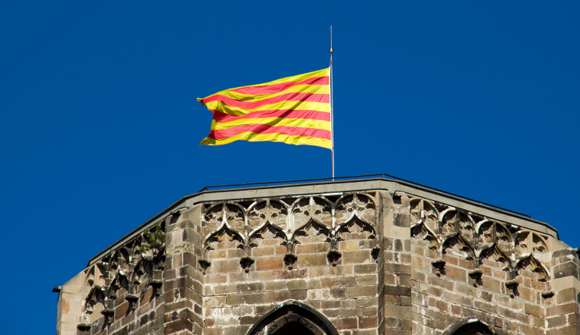 Barcelona Threatens to Print Parallel Currency, Madrid Seethes … Over the next six months, Barcelona's left-wing city council plans to roll out a cash-less local currency that has the potential to become the largest of its kind in the world. The main goal of the project, according to a council spokesperson, is to boost economic opportunities for local businesses and traders. The idea is for local stores and residents to be able to exchange euros for the new currency at a one-to-one parity, and use it to purchase products and services at a discount or with other kinds of incentives. But it doesn't end there: the new parallel currency may also be used to pay certain subsidies, taxes and local services such as public transport, reports El País. Municipal workers could also receive part of their salary in the new money. – Wolf Street

Free-Market Analysis: So Barcelona is challenging Madrid and currency is going to be the proving ground. It's a face off between the Catalan culture and the dominant Castilian culture in Madrid. It's tough not to root for the underdog here, especially because the Castilian culture is so evidently an arrogant and authoritarian one.

The Catalan culture may not be much better, but at least the Catalans are not continually oppressing the Basques and the other four or five cultures that have been smashed together to create the dysfunctional entity that is today called "Spain."

Spain generally is suffering from an identity crisis. At the depth of the Great Recession, some 50 percent of youth were unemployed. The country's institutions have suffered mightily from the economic fallout and even the highest authority figures have come under fire.

For instance, when former King Juan Carlos was discovered to be shooting elephants on a luxury safari to Africa during the depth of the economic crisis, the prestige of the royal family was rocked. Carlos later resigned the throne in order to avoid an "institutional crisis." Meanwhile, the king's youngest daughter Cristina and her husband Iñaki Urdangarin are accused of embezzlement of US$8.3 million from a charitable sports foundation.

The institutional crisis is coming anyway. The Catalans are not the only tribe that wants to depart. The Basques are one of the oldest tribes in the world and archeology cannot even account for where they came from. But they appeared thousands of years ago and may be responsible for the great cave paintings in France and Spain. The Basques are resolute about their demands for independence and they are just as serious as the Catalans.

Right now the momentum resides with Barcelona and even the idea is angering Madrid, which has called a new currency "impossible" and "undesirable." Yet it is neither. The currency is reportedly going to be modeled after the Bristol Pounds, which is one of the simpler currency variants in the world today.

The planned currency can be issued in cash or electronically and will be convertible to the euro. The idea is that local businesses will provide incentives to shoppers who wish to use the new currency. This keeps the "money" circulating locally and thus benefits the issuing community.

The Barcelona currency might also be used by the government to pay for salaries, public services and – perhaps – taxes. Because Barcelona's metropolitan area is some three million, the implementation of a successful local currency would immediately make it a force to be reckoned with, and the largest alternative currency in the world.

The model is not bad, either. The Bristol Pound, on which the Barcelona currency is said to be modeled, has proven quite popular, with about one million printed. However, the story as regards local (alternative currencies) is much larger than that.

Barcelona will not be the first European city to launch such a scheme. Local currencies are all the rage these days. There could be as many as 3,000 forms of local money in use around the globe, says Community Currencies in Action, a global partnership promoting such schemes that is part-funded by the European Union's Regional Development Fund. Which begs the question… Why's the EU promoting parallel local currencies around the world?

Perhaps there are somewhat less altruistic motives behind the EU's agenda — motives such as encouraging people to embrace cashless currencies. As I warned in The War on Cash in 10 Spine-Chilling Quotes, the war on cash has moved from one of words to actions. As such, is it pure coincidence that most of the local community currencies that have been launched so far are in purely digital format, as would Barcelona's?

Perhaps that explains why local currencies have captured the interest and support of organizations like the Long Finance Group, whose sponsors include the City of London Corporation, and which recently echoed the Bank of England's calls for the UK government to adopt a purely digital currency in order to save the national economy (no, seriously).

The local currency movement is apparently backed by Western institutions. We've pointed out that the United Nations is a big sponsor of LETS currencies that demand a central ledger – which is especially convenient when it comes to taxation because all expenditures are easily traceable.

An alternative currency will be useful to Barcelona in its fight for independence because this money would be controlled locally, not by Madrid or even by the European Central Bank. However, as Barcelona is now run by a socialist government, another possibility is that the scheme would be helpful in providing additional revenue for public spending.

The article points out that the "big challenge will be getting local people and local businesses to trust the new form of money, as well as finding a local financial institution willing to back it up with euros … Without credibility and trust, fiat money loses value very quickly."

This brings us to a larger issue: Why are so many of these local currencies fiat oriented? If Barcelona wanted to ensure the probable immediate success of its new currency, it could simply announce that some of it would be backed by gold. Even an implicit gold-backed currency would surely become an attractive local alternative. Of course, it is possible that people would hoard the stronger currency rather than spend it. But perhaps that could be overcome by local merchant incentives that would stimulate the circulation.

Certainly, gold is a winner when it comes to the creation and acceptance of money. In a well-received editorial last week, The Daily Bell's chief editor Anthony Wile pointed out that junior miners could make themselves competitive again if instead of selling their gold on the open market they attempt to retain some or most of it, either refined or simply identified in the ground.

The reason we own physical gold and silver to begin with, or ought to, is because they bring real, tangible value to our portfolios, which tend to be otherwise dominated by paper-based asset holdings. Oddly enough, the ultimate "value" of a modern mining firm – and even its share price – lies in fiat currency, and more often than not, US dollars. This doesn't make any sense. The tangible value provided by retaining physical gold and silver could aptly be thought of as portfolio insurance – protection against a paper money scheme that is accepted only so long as the mass public retains confidence in it. And today that confidence is seriously eroding.

Rudi Fronk: Your basic premise is correct. Gold miners are always seeking to turn a superior currency, gold, into an inferior one, the dollar. At Seabridge, we like to think of ourselves as modern alchemists, turning cash into gold. Over the last 16 years, we have used cash to fund acquisitions and exploration of gold projects in Canada.

The interview revealed that Seabridge holds 90 million ounces of gold in all categories, or nearly two ounces of gold per share. While gold has not been performing exceptionally well over the past few years, at some point a breakout will come and Seabridge will be in a good position to benefit from the price momentum.

Barcelona, too, could benefit from a gold link. That none of the alternative currencies, so far as we are aware, have either an explicit or implicit relationship to money metals is at the very least curious. Certainly, there are powerful forces at work in the world that desire nothing less than a resurgence of a gold standard – at the local level – no matter how sensible it might be. It's unfortunate that the local currency movement has avoided a precious metals linkage that would make many of these currencies instantly more valuable and desirable.