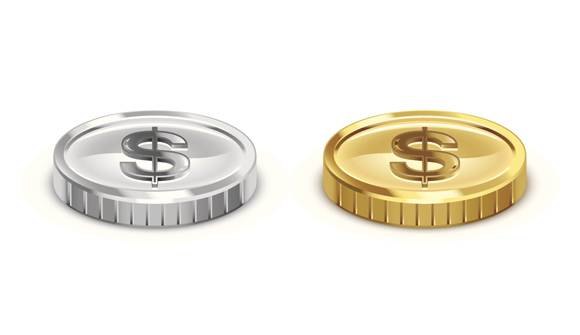 Gold & Silver, STAFF NEWS & ANALYSIS
Gold and Silver, an Antidote for the Internet of Money?
By Staff News & Analysis - October 23, 2014

Denmark's central bank to stop producing money … The outsourcing of banknote and coin production will result in 100 million kroner in savings, the bank said. With more and more people paying with credit cards and their smartphones, Denmark's central bank Nationalbanken says it no longer pays to print banknotes or mint coins. – Denmark, The Local

Dominant Social Theme: Digital money is all that counts.

Free-Market Analysis: It seems these days that every time we identify a new meme, we see a "fast-track" evolution. The "Internet of Money" is no exception.

We wrote about the Internet of Money on October 20, and now in this article in The Local, we see an apparent furtherance of this dominant social theme.

We are told that physical money is becoming less and less important. Now the Danish central bank is going to outsource its printing and save millions.

"Efficiency" itself is a meme. We ran into this recently when we wrote about how much more efficient it was to grow food using green techniques than organic, small-farm ones. The only trouble with green efficiencies is that it now turns out that such farming has changed the bacterial composition of soil for the worse.

There's nothing efficient about a technique that seems to save money initially but that in the long run is highly destructive. And so it would seem when it comes to the outsourcing of physical money. More on that in a minute.

By the end of 2016, Nationalbanken plans to outsource all of its printing and minting services to an external supplier.

"Although the amount of cash circulating in Denmark continues to be high, society's demand for new banknotes and coins has been falling for years, and Nationalbanken has no expectations that the trend will be reversed," the bank wrote in a press release.

In addition to the rise in alternative paying options, the central bank also said that today's banknotes and coins are better recirculated into the economy and made of a better quality that ensures a longer shelf life. When viewed as a whole, the bank has determined that note and coin production is no a longer financially sound option.

The bank said that the move to an external supplier will result in a total savings of 100 million kroner ($17.2 million) through 2020. In its statement, the bank stressed that having notes and coins produced externally would not affect the bank's central role.

"Nationalbanken will continue to be the issuing authority for banknotes and coins and will maintain its expertise in the area of notes and coins. It is only the internal production of the notes and coins that will henceforth by done by external suppliers," it wrote.

Denmark is not a member of the eurozone and thus the Danish central bank can print money without the authorization of the European central bank. In fact, National Bank of Denmark tries to trade in a tight range with the euro but the krone is nonetheless an independent currency.

This means the bank can print more or fewer krones at will. The idea that a central bank that can print money at will is concerned with cost savings is predictable but not entirely accurate. Central banking is inherently a ruinous mechanism that is designed to squander a culture's wealth.

The US Federal Reserve system, for instance, often refers to the checks and balances that supposedly moderate its behavior. But in 2009, at the height of the fiscal crisis, those intricate checks and balances didn't stop the bank from issuing up to US$16 trillion in secret short-term loans to banking facilities around the world. Many of these loans have not been paid back, apparently.

Central banking is designed to look as if it is assuring the nation's financial solvency but it is an inflationary mechanism that regularly debases currency. Always, the idea is to emphasize the fiscal responsibility of central banking when, in fact, there is less than meets the eye.

Many elite dominant social themes emphasize efficiency or necessity; in fact, the reason is to further the cause of internationalism. We can see this with the organic meme, as we mentioned above. But now it seems there are going to be all sorts of reasons advanced for doing away with physical currency.

We pointed this out most recently in our article, "Internet of Money Provides More Reasons to Consider Strategic Asset Protection."

The big drama inherent in the Internet of Money is its disintermediation of banks. But in fact, it does no such thing. What it will do, and is already doing, is undermining what's left of monetary privacy.

What does need to change as the Internet of Money takes hold is people's attitude toward asset protection. Whether one wants to buy and hold physical gold or purchase real estate in one or more foreign destinations, the strategy of distributing assets is likely to prove more valuable over time.

Those who want to amass easily located cash and securities will likely face increasingly invasive audits of their personal worth as the Internet of Money matures. As purely digital money becomes increasingly accepted, the possibilities of state confiscation rise as well.

It's relatively easy to remove digital currency, after all; cash and precious metals are more difficult. This goes for non-state – criminal – activities as well.

We focused on Africa, predicting that this was where the Internet of Money would move most quickly. But this announcement by Denmark's central bank shows us that this campaign to eliminate physical money may be moving on several fronts at once. True, the bank is not doing away with currency but it is certainly de-emphasizing it as part of the larger monetary process.

Central banks, controlled by the BIS, operate in policy consortiums. You can bet that other banks may adopt Denmark's position sooner or later. Central banks have the power to do what they want with money. They can abolish paper money entirely if they wish to and perhaps over time will do so.

The only money at least partially beyond their control is, perhaps, gold and silver. In our previous article we emphasized asset protection to combat the expanding Internet of Money. But let us also re-emphasize gold and silver as well. If the idea is to create a fully digital currency over time, then owning gold and silver will be one alternative that may ensure increased privacy.

Central banks will probably act aggressively to implement the Internet of Money because it offers so many advantages. It allows the authorities to track sources of funds as well as taxpayers. It also further disguises the source of money-stuff, which remains money printing by a tiny handful of elites.

But gold and silver may serve as an antidote, along with forms of barter that do not use a distributed ledger.