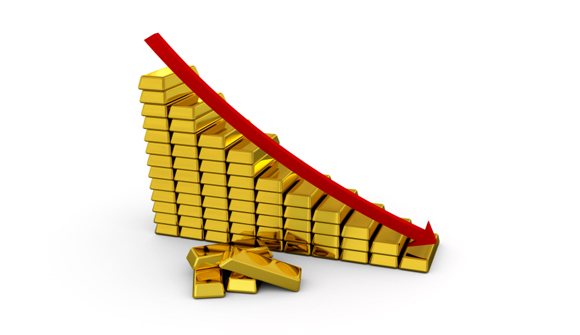 Gold Gets Gutted: Here's Why … Gold's been stuck in a pretty tight range, and it's losing ground … Gold dropped three percent Friday, suffering the worst decline of any widely followed commodity as it plunged to a two-week low. Many experts blamed the weakness on the U.S. dollar. The Dollar Index, which compares the dollar to a basket of foreign currencies, has risen nearly two percent over two days, to levels it had not seen in over a month. A rising dollar tends to hurt gold, because it makes gold relatively less expensive in dollar terms. – CNBC

Dominant Social Theme: Gold is on the way down big-time, and for good.

Free-Market Analysis: Is gold headed down in the long term? Possibly so. That doesn't mean it's a bad investment however.

Perhaps if you want to make a quick profit it is a bad investment. And if you expect a near-term rebound, you might be disappointed. But long term the reasons for holding gold and silver have not changed. Money metals are a store of value and have remained one for thousands of years.

Also, the announced price may not be entirely accurate. There may be many reasons for gold's current price but one of them is surely that the gold paper market has been pounded down by a variety of forces. Physical gold is still very expensive to buy and hold. But the London gold market that fixes prices by consensus doesn't entirely recognize this. It takes the paper price into account.

And thus the price of gold may not represent the availability of physical stores. And despite this apparent mis-pricing, top gold traders in the industry predict further erosion. Here's more from the article:

Carter Worth, Oppenheimer's chief market technician, said the chart tells you all you need to know. "A multiyear bull market has transitioned to a bear market," he told CNBC.com. "The backing and filling of late is the normal setup for the next leg down."

In other words, the tight range that gold was trading in was a precursor to the selloff —and it's nothing he hasn't seen before, Worth said. "After an initial plunge, and then a partial snap-back, any instrument usual goes quiet … only to drop again, resuming its downtrend," he said.

That's the read that GRZ Energy's Anthony Grisanti provided on Thursday's "Futures Now." "We're consolidating in this range," he said. That's why he expected "a big leg coming down."

Again, reading these sorts of articles it is difficult to distinguish between the price of gold – paper – derivatives and physical gold.

There is probably little doubt the price of gold is headed down further, at least to some extent, and this will also have an impact on mining stocks. But something else is going on, as well: the creation of gray market in gold and even silver.

That's because the physical prices and the paper prices are diverging. Increasingly, people are making private sales where the prices quoted for the physical asset may be much higher than the "public price." There is no way of tracking such private prices, however. And from a public standpoint, the price of gold is where London says it is.

Do you believe gold and silver are less valuable yesterday than today? Or do they remain part of a diversified portfolio?