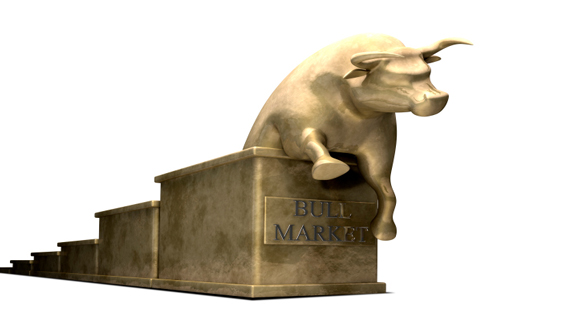 Gold & Silver, STAFF NEWS & ANALYSIS
Is the Cycle of the Golden Bull Suspended or Severed?
By Staff News & Analysis - November 12, 2014

For Gold Miners, Another Terrible Run … For years, the gold mining sector has been the worst investment sector imaginable. There was a while in 2014 when it seemed like the gold mining sector might avoid another disastrous 12-month stretch, but that seems unlikely after what has taken place in financial markets in the last few weeks. – Forbes

Dominant Social Theme: Gold and gold miners are getting crushed.

Free-Market Analysis: This is news that can be seen two ways. Looked at from a negative standpoint, the steady stream of bad news about gold continues to hike the dollar against gold. But from a positive perspective, the lower the price of gold goes against the dollar the less of it is likely available on the market.

This is for several reasons from what we can tell. First, mines begin to shut down because it is impossible to mine gold profitably at prices that are low and going lower. The break-even point for many gold miners was said to be around US$1200 – so reportedly many are struggling now.

The other reason is that gold owners begin to hoard the yellow metal at lower prices and are loath to sell it. This may generate lower prices as well but over time a lack of supply should actually begin to lift gold prices. That's marketing 101.

This Forbes article doesn't focus on the supply-demand curve at all, preferring to report on the carnage of the market to date. Here's more:

With gold trading down to $1,149 an ounce, the companies that try to extract the yellow metal from the ground got hit hard yet again on Monday. The Market Vectors Gold Miners ETF fell by 6.3% and is now down by 17% in 2014. The gold mining sector has pretty much been the worst investment sector for the last three years.

… Barrick Gold, the world's biggest gold mining company, has remained a strong example of what has gone wrong. Shares of Barrick fell by 6.7% on Monday and are now down by 36% in 2014.

The vast majority of Barrick's revenue comes from gold mining operations. With some $10 billion in net debt, Barrick has not been able to reduce its debt-load in any meaningful way as the price of gold has plunged. Its 2011 purchase of Equinox Minerals for $7.4 billion did not work out and construction on its key and half-built Pascua-Lama gold project on the Chilean-Argentine border remains temporarily suspended after environmental and legal delays.

"With the project not just vying for social acceptance in Chile (and regulatory approvals on water), but also contingent on more robust project economics, the uncertainty is heightened," Deutsche Bank recently said in a research note. "Management's target net debt of $7bn, conveyed on its 3Q14 earnings conference call, is a tall order without a combination of a higher gold price and asset sales."

This last paragraph provides a stark summary of the state of the gold market in the second decade of the 21st century. While gold had a significant run against the dollar in the first decade, the second decade has seen the dollar nearly double against an ounce of gold.

We continue to believe that the larger market remains in a kind of suspended Golden Bull. Even disregarding apparent manipulation of gold and silver markets, the evolution of precious metals price action has seemingly been, well … aberrant.

With gold rising to nearly US$2,000 an ounce at one point, we should have seen a corresponding rise in mining price action but this did not really occur. Usually when gold prices go up against the dollar, investors begin to buy the paper, which is cheaper. First the physical is purchased, then large mining stocks and finally junior miners. But we haven't seen this evolution take place this time.

Market observers suggested that funds that might have boosted mining stocks had been going into precious metals ETFs instead. But it is difficult to believe that ETFs diverted such significant funds that they virtually short-circuited the larger investment cycle.

There may be more truth to the observation that metals miners are subject to increasingly strict regulation that makes both prospecting and producing more difficult. A final thought would be that manipulations taking place at fundamental levels in the market are affecting price action generally.

Ultimately these arguments may not be so important as the realization that at some point market forces are going to reassert themselves. The lower prices go relative to the dollar, the more demand is stored and eventually will propel gold to the upside.

When gold begins to rebound against the dollar, and eventually it will as it has historically, it may well take the junior miners with it. Also, lurking issues with the US dollar may trigger a gold resurgence, specifically the growing disenchantment that the BRICs have with the dollar.

This Forbes article focuses on higher dollar prices relative to gold (and silver) but there are forces in play working on behalf of precious metals as well as against. These forces are significant and thus it is not a matter of "if" but "when" insofar as higher metals prices are concerned. This does not mean that money metals could not see a further significant erosion of prices, only that there has been no radical realignment of market forces so far as we can tell.

If the market is still subject to historical price pressures as well as the Invisible Hand itself, sooner or later we will see a resumption of the cycle of the Golden Bull.