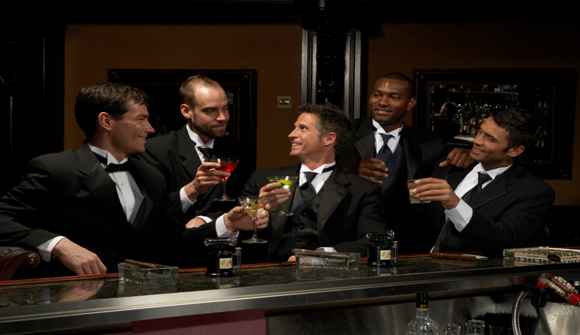 Stocks rally: Dow up 175, Nasdaq hits 14-year high … Stocks closed sharply higher Monday as the Dow surged 175 points and the Nasdaq jumped to a 14-year high. The rebound came as concerns over the Ukrainian conflict began to ease and investors shifted focus to corporate dealmaking and economic news. – USA Today

Dominant Social Theme: The Dow climbs a wall of worry.

Free-Market Analysis: What? Equities are up again? The Wall Street Party is yet in full swing?

There's no logical explanation, of course, but those following securities will always try to make one up. And so we'll hear all sorts of strange reasons for yesterday's sudden climb.

As this USA Today article points out, stocks supposedly went up as investors worried less about Ukraine and began to watch corporate deal-making. Say what? How do journos know these things? Do they take polls – or just make snap decisions when faced with deadlines?

How do they know the markets aren't simply being manipulated upwards? How do they know that people haven't internalized central banking remarks that we reported on yesterday? When you have the three top bankers in the world all aligning on the side of continued monetary easing, isn't it possible you'll see the kind of price action that we just witnessed?

Good news on the housing front added to the rally as homebuilders were feeling more confident about sales prospects. The National Association of Home Builders/Wells Fargo builder sentiment index for August rose to its highest level since January.

Despite various geopolitical tensions in Ukraine, Iraq and elsewhere, stocks are still an attractive investment, said Dan Curtin, a global investment specialist for JPMorgan Private Bank. "There are a lot of distractions out there, but the fundamental focus on equities is positive," Curtin said.

The fundamental focus on equities is positive? If stocks descend tomorrow Curtin will surely sing a different song. These people don't know, nor do they care to know.

Just the other week as markets moved down hard, people were predicting a great August unraveling, though that kind of market action almost never happens in August when most traders are vacationing in the Hamptons.

If there is going to be a market blow off, it will happen in September or October – October most likely, as that's when mutual fund managers take profits and dress up fund performances preparatory to a new year.

But even a crash such as the one that happened in 1987 may not be enough to crush this market move if central bankers are determined to keep priming the pump, as we've been documenting for many months.

What a ride it's been. Never have we seen the top men so determined to print and print and so willing to say so publicly. We've predicted Dow 20,000 and even Dow 30,000 based on the almost sociopathic determination to drown the world in dollars.

We call this the "Wall Street Party." And as an alternative media outlet dedicated to observing elite memes – especially financial ones – our analysis seems to be proving out so far. Others are noticing the weirdness, too, these days.

Yesterday an article was posted to Bloomberg from bond trader supremo Mohamed A. El-Erian, who used to run a trillion dollar fixed income portfolio for Pimco. Here's an excerpt:

Why Are Bonds and Stocks Acting Strangely? … The past week saw a dynamic in financial markets that, not long ago, would have been deemed quite unusual: Prices of all kinds of assets, from safe government bonds to risky stocks, rose together.

German bunds and U.S. Treasuries gained, pushing yields lower, as the Standard & Poor's 500 Index approached its all-time high. The movements continued to confound the once-traditional pattern, in which bond prices rise and stock prices fall when investors expect the economy to perform poorly, and vice versa.

There are various explanations, some more consequential than others. One interpretation is that investors expect hyperactive central bankers to remain their best friends, buoying markets with continued unconventional policies. Last week's disappointing economic data out of the U.S. and Europe would support this view, putting pressure on the Federal Reserve and the European Central Bank to be more accommodative than they otherwise would.

By demonstrating a consistent willingness and ability to contain market volatility and bolster the prices of financial assets, essentially divorcing equity performance from that of the underlying economy, central bankers have managed to bring more money off the sidelines and into the market.

Lower borrowing costs have also boosted companies' actual profitability, allowing them to return more money to shareholders in the form of dividends and share buybacks, as has the notion that we are in a lower historical interest-rate paradigm.

That's the optimistic view. It is also valid and, given how well it has played out, deeply entrenched in markets. But it may be only part of a less comforting explanation relating to the view that, at current valuations, bond investors may be reacting to something that the stock market has yet to recognize.

We can see that El-Erian (who is desperately trying to think of something) is offering us the idea that investors are bidding up bonds in order to position their portfolios for an inevitable sell-off. In any event, like the rest, El-Erian is trying to explain what is irrational in rational terms.

The boom in merger and acquisitions, for example, has pumped a lot of cash into the market, helping to push prices higher than what the performance of the economy would justify. If this complementary interpretation is correct, it's just a matter of time before the correlation between risky and riskless assets starts returning to its historical pattern.

So maybe it's the M&A boom! For individuals like El-Erian, it must be something. But probably there is a simpler explanation: The mask has slipped and is showing the previously hidden face of elite control. That's true not just for stock markets but in a lot of other places as well.

This is a phenomenon that we have labeled "directed history." Whether it is financial, economic, political or military actions, the 21st century has seen a significant degradation in the ability of the globalist elites to impose a believable narrative on the world's current events.

In the 20th century, when the mainstream media fully shaped messages, there were no other explanations available. But today there are and thus, those who want to move world events in certain directions are taking less care about how they do so and moving more quickly, it seems, as well.

The only explanation we've come up with regarding equity action is that the top men want a huge securities boom that will inflate assets of all kinds and finally bring Western economies into some sort of recovery. This is, in fact, not just risky; it is fairly insane. You've got a thousand-trillion dollars worth of "nominal" derivatives drifting around in a market that itself is divorced from any sort of historical price reality.

And central bankers have admitted to printing something like US$50 trillion over the past six years to re-liquefy what was essentially a bankrupt economic system. The system, in fact, collapsed in 2008-2009 and what's going on now is probably an attempt to obscure what occurred and set the stage for the next scene, which will be sooner or later a horrifying crash that will generate calls for a truly global economic system so that the carnage "will never happen again."

El-Arian writes this in conclusion:

The hard part is specifying the timing, especially as it relates to a crucial psychological question: When will investors lose faith in central banks' ability to keep bolstering the economy through higher financial asset prices?

The hard part for most investors is indeed the timing. If we are correct about this, vast fortunes may be made, huge amounts of "wealth" may be generated as powerful men cynically drive all sorts of assets higher and higher.

We've been commenting on asset inflation on a regular basis now. Hotel rooms that are selling for US$40,000 a night, prices for new, top-line yachts headed toward a half-billion dollars, etc. We'll see more of this no doubt. These people don't seem to want to stop.

If this trend does not fold in the fourth quarter but continues into the new year, we may see a truly biblical market mania. Of course, it will be explained in the most rational of terms.

But there is nothing rational about it. It will be a purely sociopathic market, one that will likely mint the first "trillionaires."

Party on! For some, what else is there to do?