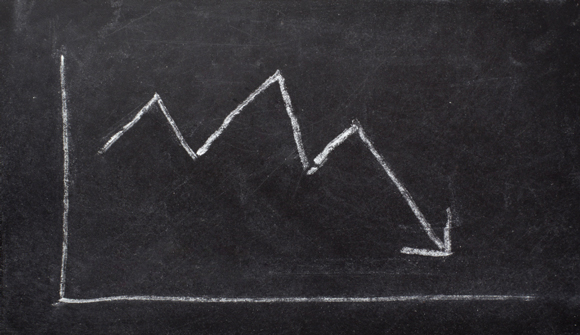 The Federal Reserve and its bullion bank agents are actively using uncovered futures contracts to illegally manipulate the prices of precious metals in order to keep interest rates below the market rate. The purpose of manipulation is to support the U.S. dollar's reserve status at a time when the dollar should be in decline from the over-supply created by QE and from trade and budget deficits.

Historically, the role of gold and silver has been to function as a means of exchange and a store of wealth during periods of economic and political turmoil. Since the bullion bull market began in late 2000, it rose almost non-stop until March 2008, ahead of the Great Financial Crisis, which started with the collapse of Bear Stearns. When Bear Stearns collapsed, gold was taken down over the course of the next 7 months from $1035 to $680, or 34%; silver from $21 to $8, or 62%. The most violent takedown occurred as Lehman collapsed and Goldman Sachs was about to collapse. This takedown occurred during a period of time when gold should have been going parabolic in price. The price of gold finally took off in late October 2008 from $680 to $1900 while the Government and the Fed were busy printing money to bail out the banks. While the price of gold rose nearly 300% from late 2008 to September 2011, the U.S. dollar lost over 17% of its value, falling from 89 on the dollar index to 73.50.

The current takedown of gold from $1900 to $1200 has occurred during a period of time when financial and political fraud and corruption becomes worse and more blatant by the day. Along with this, the intensity and openness with which the metals are systematically beat down seems to grow by the day.

Comex futures trade 23 hours a day via a global computerized trading system known as Globex. The heaviest period of trading occurs when the actual Comex floor operations are open, which is 8:20 a.m. to 1:30 p.m. EST. All other times Comex futures trade electronically via Globex. Gold and silver are smashed primarily during the Globex-only trading periods, when volume is often light to non-existent.

This graph of Comex futures trading on December 16th shows the sudden plunge in the price of silver. 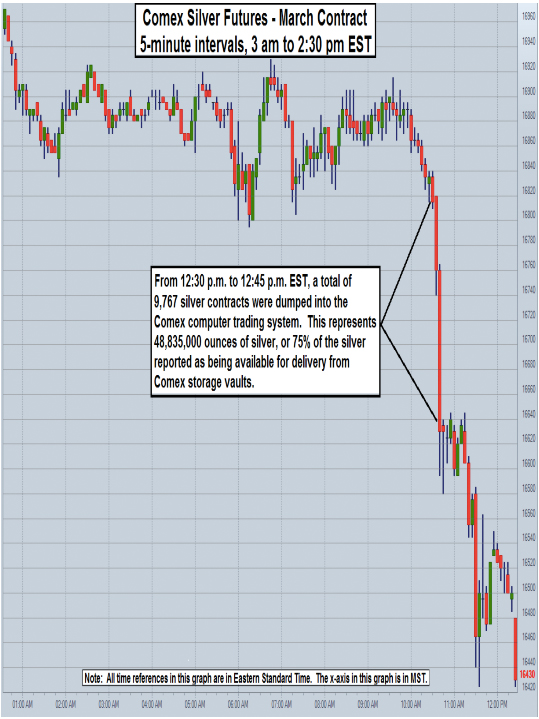 The second stage of the sharp price drop begins at 1:30 pm eastern time (11:30 mountain time), after the Comex floor trading operation was closed for the day. This is typically one of the lowest volume trading periods, during which orders to buy or sell can cause significant price disruption to the market. There were no news or events that would have triggered the sudden selling of bullion futures, and none of the other markets experienced unusual movements while gold and silver were quickly plunging in price.

To put in perspective the 9,767 silver contracts sold in 15 minutes, the total trading volume in Comex silver for the 23-hour global trading period for Comex contracts ending at 5:00 p.m. on December 15th was 149,964 contracts, or an average of 6,520 contracts per hour. The only type of market participant that would dump almost 10,000 contracts in a 15-minute period is a seller whose only motivation is to push the price of silver as low as possible. One entity that can afford to use capital like this is the Federal Reserve, because the Fed can create its own capital for free using the printing press.

In the background, the financial markets are becoming increasingly pressured by declines in emerging market currencies, insolvent sovereign governments–including here in the US–and perhaps a renewed derivatives crisis triggered by the collapse in the price of oil. The oil price decline could result in derivative problems larger than the subprime mortgage derivatives of the 2008 crisis.

The downward manipulation of the prices of precious metals prevents the "crisis warning transmission system" from properly functioning. More important, the decline in the price of gold/silver vs. the U.S. dollar conveys the illusion that the dollar is strong at a time when, in fact, the dollar should be under pressure from the over-issuance of dollars and dollar-denominated debt.

What we have been experiencing since the 2008 crisis is not only the subordination of US economic policy to the needs of banks "too big to fail," but also the subordination of law and the financial regulatory agencies to the interests of a few private banks. The manipulation of the bullion markets is illegal whether done by private parties or on public authority, and so we have the spectacle of the US government supporting a handful of banks via illegal means. Not only has economic accountability been set aside, but also legal accountability.

Obviously, the government's claim to represent the rule of law is as false as all its other claims. The foul stench of corruption and hypocrisy that emanates from Washington is the smell of a dying country.

This article, by Paul Craig Roberts and Dave Kranzler, was contributed courtesy of PaulCraigRoberts.com.