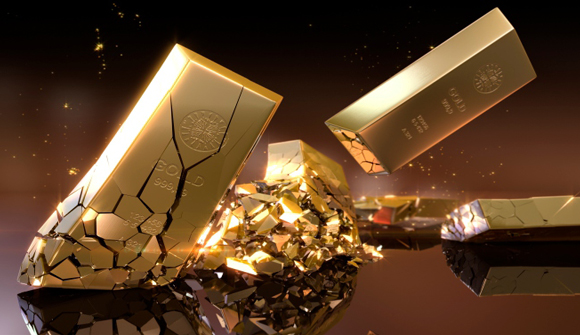 In a blatant and massive market intervention, the price of gold was smashed on Friday. Right after the Comex opened on Friday morning 7,008 paper gold contracts representing 20 tonnes of gold were dumped in the New York Comex futures market at 8:50 a.m. EST. At 12:35 a.m. EST 10,324 contracts representing 30 tonnes of gold were dropped on the Comex futures market: 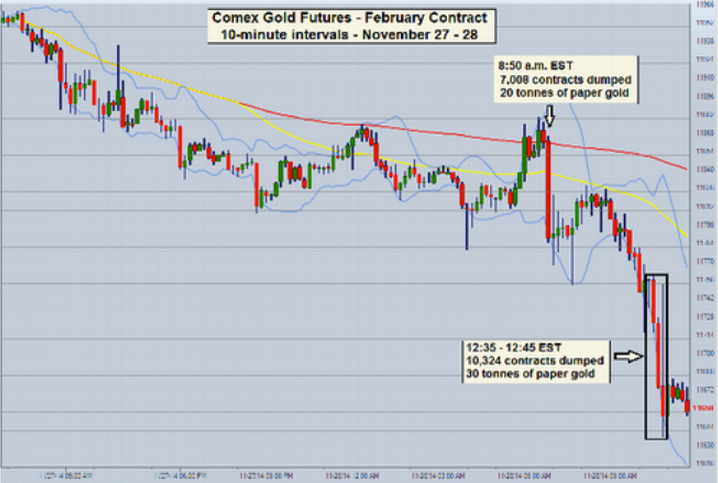 No relevant news or events occurred that would have triggered this sudden sell-off in gold. Furthermore, none of the other markets experienced any unusual movement (stocks, bonds, currencies).

The intervention in the gold market occurred on the Friday after the U.S. had observed its Thanksgiving Day holiday. It is one of the lowest volume trading days of the year on the Comex.

A rational person who wants to short gold because he believes the price will fall wants to obtain the highest price for the contracts he sells in order to maximize his profits when he settles the contracts. If his sale of contracts drives down the price of gold, he reduces the spread between the amount he receives for his contracts and the price at settlement, thus minimizing his profits, or if the price goes against him maximizing his losses. A bona fide seller speculating on the direction of the gold price would choose a more liquid market period and dribble out his contract sales so as not to cause a significant impact on the price.

As you can see from the price-action on the graph, massive sales concentrated within a few minutes minimize sales proceeds and are at odds with profit maximization. A rational seller would not behave in this way. What we are witnessing in the bullion futures market are short sales designed to drive down the price of bullion. This is price manipulation.

Here is the Security and Exchange Commission's definition of manipulation:

Manipulation is intentional conduct designed to deceive investors by controlling or artificially affecting the market for a security…[this includes] rigging quotes, prices or trades to create a false or deceptive picture of the demand for a security. Those who engage in manipulation are subject to various civil and criminal sanctions.

Why is manipulation of the price of gold in the futures market not investigated and prosecuted?

The manipulation has been blatant and repetitious since 2011.

The answer to the question is that suppressing the price of gold helps to protect the U.S. dollar's value from the excessive debt and money creation of the past six years. The attacks on gold also enable the bullion banks to purchase large blocks of shares in the GLD gold trust that can be redeemed in gold with which to supply Asian purchasers. Whether or not the Federal Reserve and the U.S. Treasury are instigators of the price manipulation, government authorities tolerate it, as it supports the dollar's value in the face of an enormous creation of new dollars and new federal debt.