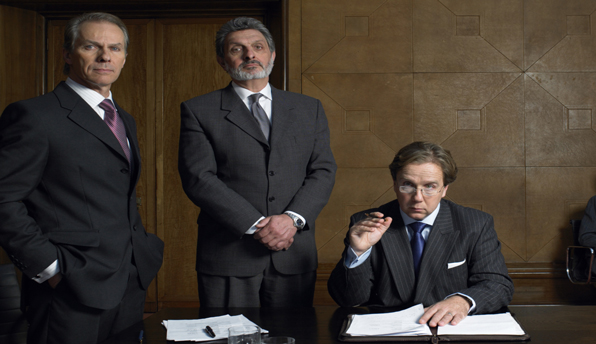 Why Europe needs the City's financial weapons of mass destruction … There is very little chance of a market-led recovery taking hold in Europe without a revival in securitised lending to give it legs. America's sub-prime lending boom led to the banking crisis, yet securitisation is poised to make a comeback … They were the "financial weapons of mass destruction" which blew up the world economy, yet perhaps surprisingly, they are poised to make a comeback – and what's more, it is with the active encouragement of Europe's new generation of central bank governors. – UK Telegraph

Dominant Social Theme: Wall Street does God's work after all.

Free-Market Analysis: So Europe's central bankers have decided that the only way to revitalize the European economy – especially Southern Europe – is via securitization of assets.

This we learn from Jeremy Warner, assistant editor of The Daily Telegraph, and author of the article excerpted above. Is it possible that Mr. Warner did not think up this thesis all by himself?

Is it possible that it was, ahem … suggested to him?

As we have reported regularly, those charged with maintaining economic order are bound and determined to continue to support – and expand – the current stock market boom.

And so … enter securitization. Of course, this financial strategy is widely held to have aggravated the 2008 financial crisis. But no matter. Five years is long enough. There is a market to stimulate and securitization provides the wherewithal.

Perhaps this is the reason we are now treated to a securitization "white paper" by Europe's central banking crowd. (See below.) And an article, as well.

Perhaps the groundwork is being laid. Directed history is about to welcome asset securitization back into the fold of reputable financial strategies.

You see, the problem is (according to the bankers) that credit from banks is not being extended. To some degree, reportedly, perpetually dampened interest rates are crowding out securitization.

This issue of low rates is obviously a big deal to central bankers. We wrote about it recently here:

IMF Misleads on Interest Rates – And So Does the Media

The idea would be that securitization can take the place of low interest rates. The ECB wants banks to increase lending while reducing leverage. If banks can bundle their loans via securitization, they can move those loans off the books.

Once the loans are off the books, the bank will have additional capital available for lending. Or so the thinking goes.

Could we so soon have forgotten the damage that these fiendishly complex instruments inflicted on the world? How could we be even thinking about inviting them back into the fold?

Well we are, and the reasons for it are sounder than you might think. Indeed, I would go further, and say that there is in fact very little chance of a broadly based, market-led recovery taking hold in Europe without a revival in securitised lending to give it legs.

… In the run-up to the crisis [of 2008], securitisation was one of the main mechanisms by which banks expanded their balance sheets and facilitated abundant credit. New lending, whether for mortgages, credit cards, car loans, commercial property or even straight SME finance, would be routinely packaged up and sold off to investors, thereby freeing up capital for yet more lending.

… The reality was that the risks were becoming progressively concentrated, through securities trading operations, on bank balance sheets, or in vehicles connected to banks, so that when the sub-prime crisis hit, and many "asset-backed securities" were found to be worthless, they undermined confidence in the entire banking system.

Why on earth would you want to bring back such collective madness? Some of the answers to this question are provided in a newly published joint paper by the Bank of England and the European Central Bank, a front runner to a more detailed consultation due to be issued next month on how to remove some of the blockages to a resurgent securitisation market.

Amusingly, the paper regurgitates many of the arguments in favour of securitisation that ahead of the crisis had lulled banking regulators into thinking it not just safe but, positively beneficial. The following sentence could have come straight from the mouth of Alan Greenspan circa 2006; a revival in asset-backed securities (ABS) issuance "could translate into a diversified funding source for banks and potentially transfer credit risk to non-bank financial institutions, thereby providing capital relief that could be used to generate new lending to the real economy".

But my intention is not to mock; rather, it is to praise. There is nothing wrong with securitisation per se, provided it is kept simple and transparent, and the wretched credit rating agencies are kept well away from the game, so that investors themselves can make up their minds about the risk, rather than abdicating responsibility to corrupted outside analysts.

The article concludes by pointing out that Europe "desperately needs new sources of market-based finance" and must re-adopt the securitization schemes of the City's "Anglo-Saxon alchemists."

The article even presents securitization as a political football. Central bankers "get it" while Brussels does not. In other words, Brussels is inclined toward strict regulation of securitized products while the banking community understands that the free market of financial instruments – maligned as they are – has a place as well.

Should we be worried about increased securitization? Not according to the article: "Properly contained, these 'financial weapons of mass destruction' are key to unlocking renewed growth and a well functioning economy."

This is where we depart from the article's analysis. The problem of modern Western economies is that they are central bank driven. Any single financial strategy is bound to blow up sooner or later because central-bank money printing inevitably creates great booms and busts.

During the "boom" period, economies expand dramatically and it seems that currency available to entrepreneurs and even average workers is inexhaustible.

During the "bust" period the reverse is true. Suddenly, companies are going bankrupt, employment is diminishing, stock markets are swooning and bankers are discovering that their balance sheets are hollowed out.

Depending on the size of the market distortion, the gradual realignment of the economy can take months or years.

The current economic crisis has been going on for at least a half-decade or more because there is a consensus among bankers and politicians that those firms – financial and industrial – that need to go bust … won't.

The "crony capitalism" that has led to this state of affairs is responsible for the endless Great Recession as well. Money circulates only reluctantly because people don't know where to invest. Large companies and banks may yet be secretly bankrupt. No one knows.

The modern central-bank run business cycle also makes regulation irrelevant because whatever regulations are passed during a bust – not that they would be effective anyway in the long term – are unwound toward the top of the boom.

There are arguments by the "national socialist" wing of the alternative media claiming that central banks are not responsible for money creation and that it is the "private sector" via commercial banking that creates most money via lending.

But this is fairly nonsensical. There were around five central banks at the end of the 19th century and today, some 100 years later, there are about 150, including 70 or so that are under the direction of the BIS. It is central banks that provide the command-and-control mechanism for monetary creation. Central banks these days set the parameters for commercial bank loans. Not enough "capital" (central bank electronic digits) and no loans can occur.

It is central banks that set the pace when it comes to money creation via absurdly low interest rates that are maintained in order to stimulate another bubble. And we can gauge the desperation of the central banking crowd by their determination to bring back "private market" securitization.

The "free-market" that such securitization is supposed to stimulate remains both moribund and farcical. And if it were somehow stimulated by securitization the result would inevitably be the same boom-and-bust that occurred throughout the latter half of the 20th century.

Nonetheless, we anticipate these sorts of strategies will be tried. The globalist crowd is determined to further inflate equity markets for a variety of reasons, as we have long pointed out. The Wall Street Party that we have exhaustively analyzed is not a marketplace evolution but a massive manipulation that includes fiscal, monetary and regulatory elements.

In pursuit of this "party" internationalist bankers are now, once again, floating securitization as methodology of credit expansion.

They are wedded to an excessively expansionist stock market for a variety of reasons – as we have previously reported. These sorts of proposals are not random suggestions. If the globalists have anything to do with it, markets will continue to be pumped incessantly.

A bigger debacle ultimately awaits. But not yet. Not for a while …