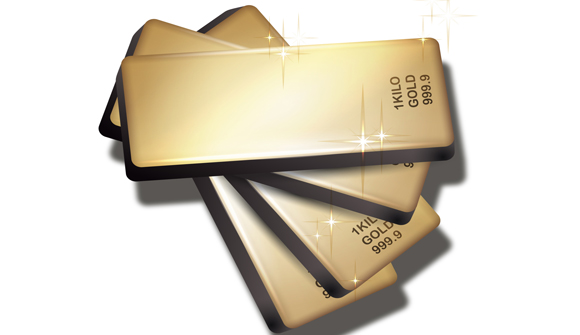 Gold has shown strength in the last couple of weeks – though inflation isn't the only catalyst. There's another factor, namely a bizarre new proposal from Bank of England Chief Economist Andy Haldane that's catching on with Fed governors and frustrated central bankers worldwide. You see, if Haldane gets his way, gold may not just be a store of value – it may be the only one left … Everybody would have bank accounts, and all payments, no matter the size, would be undertaken with debit or credit cards (which could themselves be loaded with value at an ATM). Once everything is electronic, the zero lower bound could be eliminated, and central bankers could set the short-term interest rate at minus 5% if they so desired. No wonder the gold buyers are quietly accumulating. – Wall Street Daily

Dominant Social Theme: Gold and silver are remnants of a bygone era.

Free-Market Analysis: This article provides us with an interesting speculation on how central bankers intend to get out of the fix of zero-bound rates. Also, why gold has climbed some eight percent since July, even as commodities prices in some cases have lost ground.

It all has to do with the end of cash currency, as we can see from the article excerpt above. The idea is that people are gradually realizing the abolition of cash is not just a fantasy but something that make take place within their lifetimes and maybe even within a decade or sooner.

In fact, it's not even hypothetical anymore. While Britain may be floating a trial balloon, there are realities advancing in various countries that move beyond such balloons.

Predictably, one such is Uruguay, which prides itself on being a "progressive" country and seems to serve as a kind of laboratory for "modern" trends. Previously, as we know, Uruguay pioneered cannabis legalization. Now it has launched an initiative that is obviously aimed at phasing out cash.

In Uruguay, as of the beginning of October, all employers are on notice they must deposit employee salaries into bank accounts. This very obviously expands digital transactions and reduces the utilization of cash.

The combination of Uruguay's actions and Haldane's proposal may have jolted gold prices. Certainly Haldane wouldn't have spoken out without the approval of Bank of England Governor Mark Carney. Here's more from the Wall Street Daily article:

Britain couldn't abolish cash by itself without re-introducing exchange controls, which were removed in 1979. At this point, British citizens could simply hold their cash balances in dollars, euros, or renminbi instead. Thus, the crucial players would be the euro zone and the United States.

Given the attitude of the Federal Open Market Committee members, who apparently support keeping interest rates at zero into 2016 (and for who knows how much longer), the Federal Reserve might also support cash abolition.

Plus, if rates are still at zero when the next recession hits, the pressure to do something beyond another ineffectual dose of "quantitative easing" would be immense. At that point, cash abolition might look attractive to, say, President Hillary Clinton, if she were beset by a 2017 recession.

Haldane's analysis is intriguing but there are other reasons why gold may have been on the rise. ZeroHedge takes a broader view of the recent climb, proposing that gold and silver are increasingly threatening to the fiat money system in an article entitled "Goldman Is Getting Nervous."

The article deals with Goldman Sachs' insistence that the price of gold is headed down long-term. Interestingly, the article touches on the difference between the price action of "commodities" and gold and silver, which we wrote about just yesterday.

Lately these same "serious" people are starting to get nervous, because while most other "commodities" have seen their prices plummet in the biggest crash since Lehman, gold just went green for the year.

And the last thing the financial system, already teetering on the edge of global recession, can handle is another massive momentum wave out of "intangible" assets and into very real gold, like what happened in 2010 and 2011 before the BIS ended gold's meteoric rise in September 2011.

… The biggest reason for the recent surge in gold is a direct consequence of the Fed losing credibility, and confirming yet again that the market calls all the shots, even it means debasing the dollar and sacrificing the reserve currency. In other words, it means that the more Yellen avoids renormalizing monetary policy – and since she is trapped, even the most modest rate hike will lead to an immediate rate cut and/or QE, just like in the Japan experience from August 2000, the higher gold will rise.

The ZeroHedge article goes on to point out that Goldman is looking for a 25 basis point rate hike at the December FOMC meeting, and expects a 100 basis point rise in 2016. But Goldman's confidence level here is only 60 percent over the long term and even less for the rate hike in December – at 30 or 40 percent.

Goldman's forecasts call for gold to continue to run lower against the dollar in 2016. However, the article reminds us that Goldman's forecasts have not been very accurate of late, especially when it comes to forecasting a Fed rate hike.

Here at The Daily Bell, we think the case for holding gold goes well beyond any one argument. Precious metals historically hold their value whereas history shows us clearly that fiat – any kind of state-issued money, really – is subject to endless debasement.

Today we are obviously perched at the top of yet another business cycle and the case for holding physical gold becomes even more compelling. However, there are a number of ways to hold physical gold and you don't necessary have to buy it and bury it in your back yard. In a recent article entitled "Why Most Gold Stocks Are Bad Investments," Daily Bell chief editor Anthony Wile made the case that mining companies ought to retain their confirmed gold holdings in the ground in order to build value.

He wrote, "The tangible value provided by retaining physical gold and silver could aptly be thought of as portfolio insurance – protection against a paper money scheme that is accepted only so long as the mass public retains confidence in it. And today that confidence is seriously eroding."

However you choose to hold precious metals, the case to have them as part of your portfolio builds every day. Here at The Daily Bell, we'll continue to cover gold and silver in detail along with significant moves the market makes either to the up or down side. In fact, this coming Sunday we'll feature an interview in which we discuss a gold investment that is truly unique and that you simply won't want to miss. To be notified as soon as that's published, be sure you're subscribed to The Daily Bell Newswire. If you have not yet done so, click here now to start your free subscription. We encourage you to join our international network of free-thinking investors who use this information to help make better-informed and more profitable investment decisions.