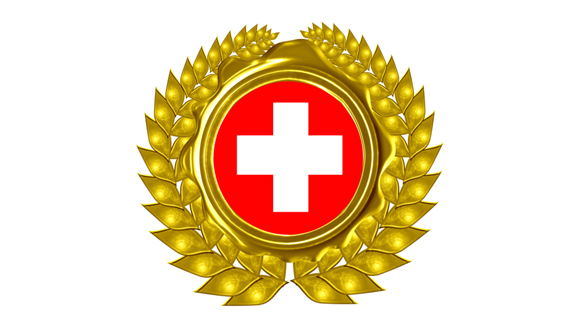 Gold & Silver, STAFF NEWS & ANALYSIS
Squeaking of the Swiss National Bank: 'No Gold for Us!'
By Staff News & Analysis - November 21, 2014

Swiss National Bank's Zurbruegg Repeats Opposition to Gold Vote … Vote Would Force SNB to Maintain a Minimum of 20% of The Assets … A member of the Swiss National Bank governing board reiterated opposition to an upcoming vote that would require it to hold a fifth of its assets in gold, saying it would impede the central bank's ability to conduct monetary policy. In text of a speech to be delivered in Geneva on Thursday, Fritz Zurbruegg said the initiative, known as "Save Our Swiss Gold," would put restrictions on the central bank if passed that would "severely restrict our scope of action." That, in turn, would make it considerably more difficult for the SNB to meet its legal mandate of ensuring price stability, he said. – Wall Street Journal

Dominant Social Theme: Gold … get rid of it, please.

Free-Market Analysis: Gone is the almost disparaging confidence of Swiss bankers and others when it comes to this anti-fiat referendum that could basically force the Swiss National Bank to back at least 20 percent of assets with gold.

Only months and even weeks ago they were almost derisively confident, buoyed by polls that seemed to show that significant numbers of Swiss enjoyed the debasement of their currency at the hands of the EU.

Put most simply, the Swiss franc only several decades ago was almost "good as gold." Today, linked to the euro, it is indeed "good as the EU" – which leads to the question whether it is any good at all.

The EU debasement is ongoing but in the wacky world of international banking such debasement is considered a hallmark of prosperity. The less your currency is worth the better off you are. Something like that.

The sophistry can make your teeth ache, yet it is repeated around the world in thousands of articles, reports and communiqués every hour, every day, every week.

The economic policies of the world are built on it. Financial catastrophes are to be liquidated via the printing press. The more you owe, the more monetary units you produce, debasing the currency for all and providing the illusory notion that catastrophe always has a silver (or gold) lining. (Ask the Japanese how well this works.)

We see all these nostrums trotted out in statements such as this one by the Swiss central bank, excerpted above. Here's more:

"The SNB considers the initiative to be unnecessary and harmful," Mr. Zurbruegg said in the speech. "Price stability and the stability of the Swiss franc are not determined by the share of gold in the SNB's balance sheet, but by its monetary policy."

Mr. Zurbruegg said the initiative's prohibition on sales of gold were particularly problematic because it limits the utility of the asset when dealing with economic challenges.

"We may even go so far as to say that gold which cannot be sold in a crisis no longer meets the definition of a reserve and thus offers no security at all," he said.

The organizers of the initiative, members of the right-wing Swiss People's Party, say the measures are needed because the SNB's policy of capping the value of the franc has left its balance sheet stuffed with euros. Those euros, they say, have been devalued in the wake of the financial crisis.

Okay, standard stuff for the most part … What's not so standard is that central bankers are being forced to trot out their arguments in the face of a significant monetary challenge. The resulting explanations are informed with a sense of urgency that more fully reveals their disingenuous nature.

The argument – like so many associated with central banking – involves the invocation of bankers' privilege. It is a technocratic argument because it assumes that bankers know best when it comes to the volume and value of money.

Yes, central bankers insist on their prerogative based on their superior knowledge of how the world works. And they simply do not know. They cannot in any sense support their arguments.

These technocrats have had a century to cultivate and improve their model and over time it has proven flawed. Depressions, recessions and ever-escalating and regional and world wars provide the theme – the sound track – for the expansion of this endless monetary manipulation.

At the beginning of the 20th century there were perhaps five central banks. Today there are some 150 central banks with the BIS in Switzerland to coordinate them all. It is a legalized monopoly and it attempts to run the world.

We don't know if the upcoming Swiss referendum will win or not. We assume elite interests will do all they can to ensure the referendum loses, even if illegal measures are employed. The referendum, from what we can tell, did not emerge from any of the predictable interests allied with monetary elites. Thus, they shall be doubly desperate to refute it.

Whatever does occur, presumably a defeat (though we would be delighted to be wrong), these sorts of issues will not go away. As we point out in the other article in this issue, it is the Internet itself, and the information available, that is creating the conditions that give rise to considerable economic and sociopolitical ferment.

People are discovering for themselves that their "matrix" has boundaries and that the modern – current – template need not apply eternally. They are challenging the common wisdom, breaking the bonds of public school programming and discovering that the history of the world and its human species is infinitely richer and more flexible than they have been taught to believe.

Again, whether or not this referendum wins the day, the underlying factors that have cultivated it are not disappearing. People will not accept hoax-like aspects of the current system forever.

In fact, those behind it are aware as well …