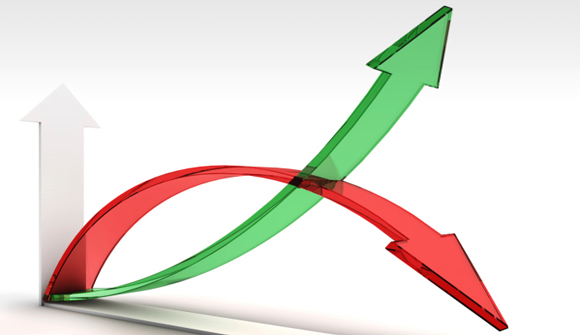 Gold & Silver, STAFF NEWS & ANALYSIS
Stock Markets Up, Gold Down – Is Something Wrong With This Picture?
By Staff News & Analysis - April 15, 2013

Big money flowing into stock, bond funds … Go with the flow: Investors added a record amount of cash to mutual funds in the first quarter. Stock and bond funds attracted a combined $193 billion, industry consultant Strategic Insight said. That tops the previous record of $140 billion in net deposits in the first quarter of 2007. ETF cash haul: Including exchange-traded funds, net deposits into funds totaled $246 billion in the first three months of 2013, also a record … Net deposits into conventional mutual funds and ETFs totaled $246 billion. The previous record of $173 billion was set in last year's first quarter. This year's figures suggest that investors are getting comfortable with stocks again after the financial meltdown and market plunge of 2008-2009. – AP

Free-Market Analysis: The mainstream media is filled with reports of stock markets moving up and precious metals moving down. One would think the bad times were over and the good times had begun again.

But what if it is all a kind of chimera based on a lack of understanding about price inflation and a lack of critical reporting? As part of the alternative press, it may sound as if we are criticizing a trend we don't understand. But we are not alone in believing that something is amiss.

Rather than cite figures from further alternative news outlets, we turn to a late March article in the Wall Street Journal by uber-financier and Daily News publisher Mortimer Zuckerman entitled, "The Great Recession Has Been Followed by the Grand Illusion."

Don't be fooled by the latest jobs numbers. The unemployment situation in the U.S. is still dire.

The Great Recession is an apt name for America's current stagnation, but the present phase might also be called the Grand Illusion—because the happy talk and statistics that go with it, especially regarding jobs, give a rosier picture than the facts justify.

The country isn't really advancing. By comparison with earlier recessions, it is going backward. Despite the most stimulative fiscal policy in American history and a trillion-dollar expansion to the money supply, the economy over the last three years has been declining. After 2.4% annual growth rates in gross domestic product in 2010 and 2011, the economy slowed to 1.5% growth in 2012. Cumulative growth for the past 12 quarters was just 6.3%, the slowest of all 11 recessions since World War II.

And last year's anemic growth looks likely to continue. Sequestration will take $600 billion of government expenditures out of the economy over the next 10 years, including $85 billion this year alone. The 2% increase in payroll taxes will hit about 160 million workers and drain $110 billion from their disposable incomes. The Obama health-care tax will be a drag of more than $30 billion. The recent 50-cent surge in gasoline prices represents another $65 billion drag on consumer cash flow.

February's headline unemployment rate was portrayed as 7.7%, down from 7.9% in January. The dip was accompanied by huzzahs in the news media claiming the improvement to be "outstanding" and "amazing." But if you account for the people who are excluded from that number—such as "discouraged workers" no longer looking for a job, involuntary part-time workers and others who are "marginally attached" to the labor force—then the real unemployment rate is somewhere between 14% and 15%.

Other numbers reported by the Bureau of Labor Statistics have deteriorated. The 236,000 net new jobs added to the economy in February is misleading—the gross number of new jobs included 340,000 in the part-time, low wage category. Many of the so-called net new jobs are second or third jobs going to people who are already working, rather than going to those who are unemployed.

The number of Americans unemployed for six months or longer went up by 89,000 in February to a total of 4.8 million. The average duration of unemployment rose to 36.9 weeks, up from 35.3 weeks in January. The labor-force participation rate, which measures the percentage of working-age people in the workforce, also dropped to 63.5%, the lowest in 30 years. The average workweek is a low 34.5 hours thanks to employers shortening workers' hours or asking employees to take unpaid leave.

Zuckerman goes on to give us more facts and figures about the US's recovery/non-recovery. He concludes by urging renewed government sponsored job training programs that are embraced by a unified political establishment that is "free of ideology."

He calls the current political environment "rancorous" and unwilling to confront the US's real issues with a "hardheaded pragmatic recognition of what must be done to restore America's vitality."

But if you read the full article you come away convinced that all Zuckerman really has in mind is "retraining." And he apparently wants the political class to do it.

Here at The Daily Bell, like many other alternative news outlets, we've provided a very simply prescription that would lead to a cure.

End monopoly (central bank) fiat money printing and allow the marketplace itself to offer the historical monetary alternatives that have worked well in the past.

Absent the ability to massively fund itself, Leviathan would gradually begin to shrink. The entire globalist campaign would start to subside, including the massive warring, the increasingly skewed wealth equation, the regulatory state itself and the other paraphernalia of the modern demos.

It is also true that stock markets would gradually subside, too, as they are evidently and obviously an outgrowth of aggressive money printing and are not a barometer anymore of larger economic vitality.

From a purely investment standpoint, stocks may provide some additional gains and (for investors) much needed profits, provided they don't unexpectedly retreat.

But to treat the phenomenon as evidence of a "recovery" is to mistake artificial stimulation for a real recovery. If you have invested in equities that have appreciated considerably, congratulations. But don't be fooled by the hype. Like so many things in the modern world, what we have today is merely an imitation of a long-lost reality.