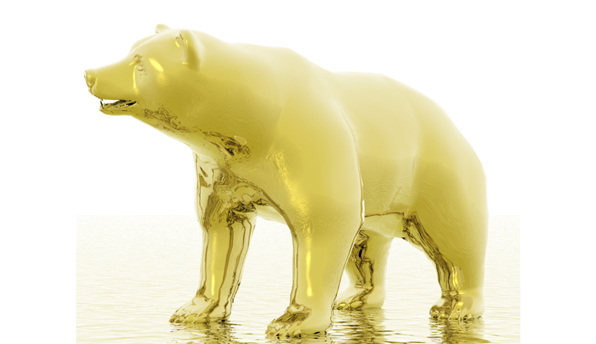 Kiss Gold Bull Market Goodbye … In the beginning of this year, we looked at some of the trading errors commonly made by gold investors during this cycle. At the time, gold had fallen 38 percent from its 2011 peak. Yesterday, spot gold traded at less than $1,242 before closing slightly higher. Gold is hitting new multiyear lows relative to the Standard & Poor's 500 Index. J.C. Parets, a technical analyst at Eagle Bay Capital, notes: "This downtrend has been very strong over the past 30 months and is hard to fight." – Bloomberg

Free-Market Analysis: Is the gold bull market really over? Bloomberg says it is.

We see the world a little differently, of course. We don't see any real lessening of demand for gold, or for silver for that matter.

But Bloomberg has a narrative and they're sticking to it. Here's more:

The key support level, according to Parets, is $1,180. Spot silver has already broken its major support level of about $19. Parets adds that this break in silver could auger a further decline for gold as well, including the mining companies.

If you must be long on a precious metal, Parets suggest you consider palladium as an alternative to gold or silver. The driving force in the technical weakness of gold has been the rally in the U.S. dollar, which Parets describes as potentially an "epic squeeze."

Historically, there has been a reliable negative correlation between precious metals and the dollar. Expectations for a snapback rally have failed to materialize. After falling by half in 2013, the gold-mining stocks staged a rally at the start of this year.

… [The] collapse in 2013 led to a round of forecasts that a gold bottom was in the offing, and that investors should expect higher prices in 2014. So why has the rally in precious metals been notable mainly for its absence? There are several reasons:

1. Economic stability: Following the tumult of the financial crisis, the past five years have been relatively stable. Growth has been steady, albeit modest. The 1 percent decline in gross domestic products in the first quarter was chalked up to the worst winter in a half-century. Other data suggests significantly better numbers for the second quarter.

2. U.S. dollar rally: In the 2000s, the U.S. dollar index declined 41 percent. That helped gold prices soar. Since then, the dollar has been one of the stronger major currencies, providing a significant headwind to precious metals.

3. Low inflation: Despite ominous forecasts of hyperinflation, there has been only a modest increase in consumer price index. For five years, inflation has been a no-show. That removed a major rationale for gold ownership.

4. Geopolitics: Even with all of the turmoil, the fear trade hasn't caught on. Sure, the first half of this year has seen lots of regional skirmishes, but they remain local. The Ukraine crisis seems to be mostly a Russian affair, while disputes between China and its neighbors are specific problems to Asia. Yes, it always seems like we are on the verge of war breaking out somewhere, but geopolitics has been a minor this year.

5. No equity crash: The long-awaited bubble popping hasn't occurred. Expectations are that once this finally happens, investors will flock back to the precious metals. The bottom line seems to be that all of the factors that led to the huge rally in gold from 2001-2011 are no longer present.

Let's take these points one at a time.

Economic stability: Really? Even in the US, there are 50 million on food stamps and unemployment is generally acknowledged in the alternative 'Net media to be over 20 percent. Major cities like Detroit are bankrupt and the national debt continues its uncontrollable rise. In the long term, prospects are even worse, with the US facing nominal, total obligations in the area of US$200 trillion.

US dollar rally: Yes, the dollar has moved up against gold, but this is a temporary event. We have often pointed out that the dollar is not just under attack overseas; it's being attacked by the very forces that created its current petrodollar incarnation. The international banking community does not intend for the dollar to last long, in our view. At some point, a profound crisis will sink the dollar permanently in favor of an international basket of currencies. When this occurs is not entirely predictable, but we certainly see signs the groundwork is being prepared – and have reported on them.

Geopolitics: This is perhaps the only point on which we agree with Bloomberg. We don't see the escalation of tensions with either China or Russia, the two countries that could truly destabilize the world scene within the context of a US confrontation. Most of what is going on is posturing, in our view, and the rest is an attempt to create a Cold War style atmosphere that makes it easier for governments to pass yet more authoritarian measures that are conducive to the furtherance of globalism.

No equity crash: Here we are on familiar ground, agreeing with Bloomberg based on our understanding of elite dominant social themes. It seems to us that there are forces supporting Western stock markets – especially US ones – that are determined to push equity valuations higher for the near term, and perhaps even for several years. There are numerous reasons for this, the most important of which is that if markets ascend high enough, the next crash will be grave, indeed, and such gravity would help precipitate a fuller globalization of monetary and even fiscal policy.

Nonetheless … our fundamental difference with Bloomberg has to do with what we call "directed history." We believe that the gold market (and the silver market) is a controlled one and that gold's current doldrums are in large part the result of manipulation, not the aforementioned market factors that Bloomberg likes to present, as it has in this article.

One need only search for "gold manipulation" in 'Net search engines to find that Bloomberg itself has posted articles on gold manipulation and that even now there is litigation based on purported practices conducive to gold-dampening that are ongoing and have existed for quite a long time.

Firms declare how many bars of gold they want to buy or sell at the current spot price, based on orders from clients and themselves. The price is increased or reduced until the buy and sell amounts are within 50 bars, or about 620 kilograms, of each other, at which point the fix is set.

The London gold fix, the benchmark used by miners, jewelers and central banks to value the metal, may have been manipulated for a decade by the banks setting it, researchers say.

Unusual trading patterns around 3 p.m. in London, when the so-called afternoon fix is set on a private conference call between five of the biggest gold dealers, are a sign of collusive behavior and should be investigated, New York University's Stern School of Business Professor Rosa Abrantes-Metz and Albert Metz, a managing director at Moody's Investors Service, wrote in a draft research paper.

"The structure of the benchmark is certainly conducive to collusion and manipulation, and the empirical data are consistent with price artificiality," they say in the report, which hasn't yet been submitted for publication. "It is likely that co-operation between participants may be occurring."

The paper is the first to raise the possibility that the five banks overseeing the century-old rate — Barclays Plc, Deutsche Bank AG (DBK), Bank of Nova Scotia (BNS), HSBC Holdings Plc (HSBA) and Societe Generale SA (GLE) — may have been actively working together to manipulate the benchmark. It also adds to pressure on the firms to overhaul the way the rate is calculated. Authorities around the world, already investigating the manipulation of benchmarks from interest rates to foreign exchange, are examining the $20 trillion gold market for signs of wrongdoing.

Whether or not gold manipulation stems directly from "the price fix" itself or from other cartel-like activities is certainly debatable, but there is much about gold and silver that hasn't made sense for a long time. To any unbiased observer – or so it seems to us – the structure of markets and the participation of certain powerful players provides plenty of suspicion that prices continue to be manipulated worldwide.

Gold remains the free-market money of choice for many, a precious metal that has held its value for thousands of years while other forms of money and currency have come and gone.

Bloomberg, as part of mainstream media, supports the narrative of king dollar and positions the price permutations of precious metals as part of a free-market outcome. But this is surely dubious. Our position is not that the dollar is going to crash against gold any time soon but that the REASONS for the dollar's pricing against gold as related in this Bloomberg article are questionable to say the least.

The Wall Street Party is probably going to continue a while longer, as we have forecast. And then, at some point, precious metals will come back into vogue, either because the price suppression campaign will collapse or because those behind it will decide there is not point in continuing it. Either way, gold will have "another" day. The current price structure – even if the dollar should move up against gold for a while longer – is likely unsupportable.

Change is coming – to both the dollar and to gold. And it will have little or nothing to do with the reasons cited above by Bloomberg.