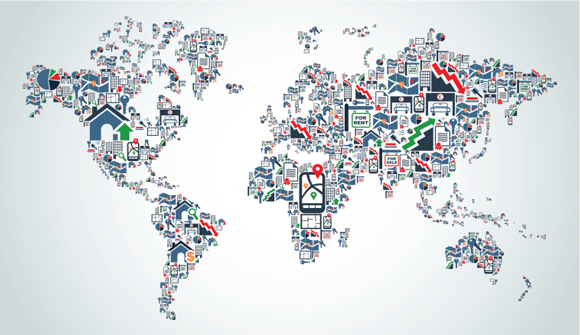 2015 forecast: What's in store for the global real estate sector? Foreign ownership restrictions relaxed, increasing interest from international investors, property industries going mobile – these are just some of the developments that are on the cards for frontier real estate markets in 2015. As 2014 draws to a close, global property portal Lamudi looked at five key trends to watch out for in emerging market real estate next year. – Arabian Business

Dominant Social Theme: Now is a good time to buy around the world.

Free-Market Analysis: Actually, we are not surprised by this sort of article. It is a bubble article and bubbles are blowing up everywhere – East and West.

Central banks are printing and rates are lowering despite the doom and gloom regarding inflation. The asset bubbles are right on time.

People are purchasing pennies for millions of dollars (kid you not). The fine art market is zooming. Yachts and expensive sports cars are flying out the doors. Small apartments in big cities are selling for tens of millions.

This happens every time. And every time people are surprised. They don't see it. When prices are going up, that's NORMAL. Everyone should be wealthy. Everyone's assets should increase by leaps and bounds, especially at the high end. And the international property market is no different. It's heating up.

The trends this article presents are surely influenced by asset inflation. We are not surprised to find the first trend is "Changes to foreign ownership laws." When markets heat up, regulations often tumble down. People want to make money and they're not about to let something like a law stop them. More:

In many emerging markets, foreigners are prohibited from buying property. In the Philippines, for example, the country's constitution bans non-Filipinos from owning land. However, there are signs this may be about to change. 2015 will see countries in the Association of Southeast Asian Nations (ASEAN) merge to form a single market. The establishment of the ASEAN Economic Community is expected to boost foreign direct investment in the Philippines and also in untapped markets across the region

Foreign direct investment (FDI) in emerging countries has recently hit record highs and this trend is expected to continue for 2015. Africa's share of global FDI projects has also been increasing steadily over the past decade. A recent report from the African Development Bank, the United Nations Development Program and the Organization for Economic Cooperation and Development forecast that FDI in the continent would hit a record $80 billion in 2014, with real estate a major contributor.

Countries such as Indonesia have seen significant growth of their middle class. On the back of strong economic growth in the country, the number of middle class and affluent Indonesians is expected to reach more than 140 million people by 2020, according to research from the Boston Consulting Group. The impact of this trend cannot be underestimated, as it continues to be felt in 2015.

"Mobile internet transforms property industries." We're not quite sure how this is a property trend, but presumably, real estate benefits from increased communication. In a bubbling market, there's plenty of sovereign cash to drive the penetration of big communication projects. More:

Across the emerging markets, more and more people are switching online every year. But the internet revolution in emerging countries has been different to the digital wave that already swept the developed world. For many people in these regions, the first time they access the web they will be using a mobile device or smartphone. This trend has been particularly pronounced in Latin America. Over the past six months, more than 1.1 million sessions on the Lamudi Mexico website were carried out using mobile devices.

A final trend: "High growth – and optimism – continues." Of course people are optimistic! Central banks are printing and interest rates are contracting. Soon it may be the 1980s all over again. Or the late 1990s. Or the middle 2000s.

It's a bubble … A series of bubbles. An asset bubble. Even savvy Daily Bell readers don't necessarily believe this, focused on falling commodity prices as they may be. But people are happy, or will be happy, because prices are going "up." More:

In a recent online survey conducted by Lamudi, real estate agents across the emerging markets predicted high growth for their national property sectors in the coming year. In Saudi Arabia, nearly a quarter (23 percent) of agents believe there will be growth of eight to 10 percent over the next year. Similar results were seen elsewhere in Asia and the Middle East. In Sri Lanka, where the real estate sector has expanded rapidly since the country's civil war ended, more than half the agents surveyed by Lamudi forecast growth of eight percent or above for the coming year. The survey also recorded high levels of optimism among property agents, with 65 percent brokers in Pakistan, Sri Lanka, Myanmar and Indonesia describing their outlook as positive for 2015.

See, there's buying around the world. It's our perspective that it may just have begun. Now may not be too late to get involved. For now anyway, it's a Wall Street Party … and it may be going global. Prices will likely continue to climb, even in the face of a great deal of deflationary jabber.

The best thing you might want to do is purchase something practical and yet enjoyable before inflation renders profit-taking moot. High Alert has introduced two exciting real-estate opportunities for your consideration. You can see them here: "Your Second Home … In A Second Country" and "Are You Prepared For Economic and Civil Chaos?"