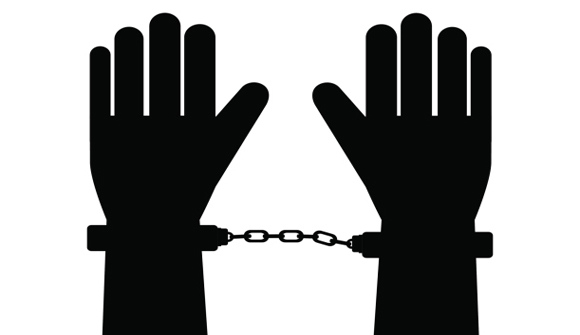 "In many parts of the country, teachers are viewed as beyond reproach, much like doctors, police officers, or clergy … and, therefore, are rarely challenged about their classroom conduct. In some cases, this means that actions that would be considered criminal if committed by a parent remain unchallenged by law enforcement if they occur in a school setting."—Senator Tom Harkin, "Dangerous Use of Seclusion and Restraints in Schools Remains Widespread and Difficult to Remedy: A Review of Ten Cases"

Roughly 1500 kids are tied up or locked down every day by school officials in the United States.

At least 500 students are locked up in some form of solitary confinement every day, whether it be a padded room, a closet or a duffel bag. In many cases, parents are rarely notified when such methods are used.

On any given day when school is in session, kids who "act up" in class are pinned facedown on the floor, locked in dark closets, tied up with straps, bungee cords and duct tape, handcuffed, leg shackled, tasered or otherwise restrained, immobilized or placed in solitary confinement in order to bring them under "control."

In almost every case, these undeniably harsh methods are used to punish kids for simply failing to follow directions or throwing tantrums. Very rarely do the kids pose any credible danger to themselves or others.

Unbelievably, these tactics are all legal, at least when employed by school officials or school resource officers (a.k.a. police officers) in the nation's public schools.

For example, in what may be the youngest example of a child being restrained in this way, in October 2014, a 4-year-old Virginia preschooler was handcuffed, leg shackled and transported to the sheriff's office after reportedly throwing blocks and climbing on top of the furniture. School officials claim the restraints were necessary to protect the adults from injury.

In New York, "school safety agents" tied a 5-year-old ADHD student to a chair with Velcro straps as a punishment for throwing a tantrum in class. Police officers claim the straps were necessary because the boy had tried to bite one of the adults.

A 6-year-old kindergarten student in a Georgia public school was handcuffed, transported to the police station, and charged with simple battery of a schoolteacher and criminal damage to property for throwing a temper tantrum at school.

A second-grader in Arizona who suffers from ADHD was duct-taped to her chair after getting up to sharpen her pencil too often.

Kentucky school officials placed a 9-year-old autistic student in a duffel bag as a punishment acting up in class. Turns out, it wasn't the first time the boy had been placed inside the "therapy bag."

An 11-year-old special needs student had his hands cuffed behind his back and was driven home in a police car after refusing to come inside after recess and acting in an out of control manner by "passively" resisting police officers.

Unfortunately, these are far from isolated incidents.

According to a ProPublica investigative report, such harsh punishments are part of a widespread phenomenon plaguing school districts across the country.

In 2012 alone, there were more than 267,000 attempts by school officials to restrain or lock up students using straps, bungee cords, and duct tape. The numbers are likely far greater when one accounts for the schools that underreport their use of such tactics.

Vogell found that "most [incidents] of restraints and seclusions happen to kids with disabilities—and are more likely to happen to kids with autism or emotional/behavioral problems." Often due to their age, their emotional distress, or their disabilities, these young people are unable to tell their parents about the abusive treatment being meted out to them by school officials.

At least 500 students are placed in "Scream Rooms" every day (there were 104,000 reported uses of scream rooms in a given year). For those unfamiliar with the term, a "scream room" is an isolated, unmonitored, locked room—sometimes padded, often as small as four-feet-by-four-feet—which school officials use to place students in seclusion.

These scream rooms are a far cry from the tested and approved "time out," which involves monitoring the child in a non-locked setting in order to calm him down. As psychiatrist Keith Albow points out, "Scream rooms are nothing but solitary confinement, and by extension, that makes every school that uses them a prison. They turn principals into wardens and make every student an inmate."

This is the end product of all those so-called school "safety" policies, which run the gamut from zero tolerance policies that punish all infractions harshly to surveillance cameras, metal detectors, random searches, drug-sniffing dogs, school-wide lockdowns, active-shooter drills and militarized police officers.

Paradoxically, instead of making the schools safer, school officials have succeeded in creating an environment in which children are so traumatized that they suffer from post-traumatic stress disorder, nightmares, anxiety, mistrust of adults in authority, as well as feelings of anger, depression, humiliation, despair and delusion.

Even in the face of parental outrage, lawsuits, legislative reforms, investigative reports and endless cases showing that these tactics are not working and "should never be used for punishment or discipline," full-grown adults – police officers and teachers alike – insist that the reason they continue to handcuff, lock up and restrain little kids is because they fear for their safety and the safety of others.

"Fear for one's safety" has become such a hackneyed and threadbare excuse for behavior that is inexcusable. Dig a little deeper and you'll find that explanation covers a multitude of sins, whether it's poorly trained police officers who shoot first and ask questions later, or school officials who are ill-equipped to deal with children who act like children, meaning they don't always listen, they sometimes throw tantrums, and they have a hard time sitting still.

That's not to say all schools are bad. In fact, there are a small but growing number of schools that are proactively switching to a policy of Positive Behavior Interventions and Supports (PBIS), which relies on the use of "engaging instruction, combined with acknowledgement or feedback of positive student behavior," in order to reduce the need for unnecessary discipline and promote a climate of greater productivity, safety, and learning. One school in Pennsylvania for children with significant behavior challenges found that they were able to "reduce the use of physical restraint from approximately 1,000 incidents per year in 1998 to only three incidents total in 2012" after switching to a PBIS-oriented program. If exposed to this positive reinforcement early enough in school, by the time a student makes it to the third grade, little to no intervention is required.

Unfortunately, these schools are still in the minority in an age that values efficiency, expediency and conformity, where it's often faster and easier to "lock down" a kid who won't sit still, won't follow orders, and won't comply.

Certainly, this is a mindset we see all too often in the American police state.

So what's the answer, not only for the here-and-now – the children growing up in these quasi-prisons – but for the future of this country? How do you convince a child who has been routinely handcuffed, shackled, tied down, locked up, and immobilized by government officials – all before he reaches the age of adulthood – that he has any rights at all, let alone the right to challenge wrongdoing, resist oppression and defend himself against injustice?

Most of all, as I point out in my book A Government of Wolves: The Emerging American Police State, how do you persuade a fellow American that the government works for him when for most of his young life, he has been incarcerated in an institution that teaches young people to be obedient and compliant citizens who don't talk back, don't question and don't challenge authority?

Peter Gray, a professor of psychology at Boston College, believes that school is a prison that is damaging our kids, and it's hard to disagree, especially with the numbers of police officers being assigned to schools on the rise. What this means, notes Mother Jones, is greater police "involvement in routine discipline matters that principals and parents used to address without involvement from law enforcement officers."

Students, in turn, are not only finding themselves subjected to police tactics such as handcuffs, leg shackles, tasers and excessive force for "acting up" but are also being ticketed, fined and sent to court for behavior perceived as defiant, disruptive or disorderly such as spraying perfume and writing on a desk.

Clearly, the pathology that characterizes the American police state has passed down to the schools. Now in addition to the government and its agents viewing the citizenry as suspects to be probed, poked, pinched, tasered, searched, seized, stripped and generally manhandled, all with the general blessing of the court, our children in the public schools are also fair game.

What can be done?

Without a doubt, change is needed, but that will mean taking on the teachers' unions, the school unions, the educators' associations and the police unions, not to mention the politicians dependent on their votes and all of the corporations that profit mightily from an industrial school complex.

As we've seen with other issues, any significant reforms will have to start locally and trickle upwards. For a start, parents need to be vocal, visible and organized and demand that school officials 1) adopt a policy of positive reinforcement in dealing with behavior issues, 2) minimize the presence in the schools of police officers and cease involving them in student discipline and 3) insist that all behavioral issues be addressed first and foremost with a child's parents, before any other disciplinary tactics are attempted.

"Children are the messages we send to a time we will not see," Professor Neil Postman once wrote. If we do not rein in the police state's influence in the schools, the future to which we are sending our children will be characterized by a brutal, totalitarian regime.

This commentary contributed courtesy of The Rutherford Institute. Click here to be taken to the commentary with all links.