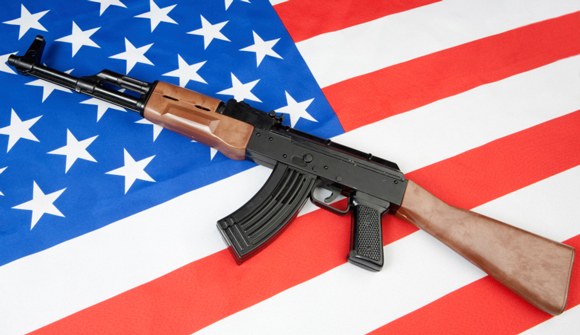 Enforcement Assistance Administration (LEAA) was created to achieve this goal. A counter move by concerned citizens was the "support your local police and keep them independent" movement. Older citizens may recall seeing bumper stickers and other advertising to that effect. The LEAA was abolished in 1982. Today, a new movement is afoot to nationalize our local police by stealth. In the 2008 campaign, Barack Obama advocated "a civilian police to match the size and power of our armed forces." More recently, Obama advocated enlarging the U.S. Marshal's Service into a "stability police." He is being assisted by the Southern Poverty Law Center. The group has convinced many local police and sheriff's officials that conservatives are the enemy. – CJOnline

Dominant Social Theme: What the US needs is more law and order.

Free-Market Analysis: We have been commenting on the growing wave of "law and order" in the United States. And this letter to the editor, excerpted above, is surely another sign of it. There is so much ruin in the country (and the West) now that the powers-that-be are likely growing increasingly worried about civilian unrest.

They are, in our view, actively encouraging such unrest (so as to be able to shape it) but also, at the same time, they are suppressing unrest and seek to create further law enforcement bodies and quasi-military groups to ensure that civil unrest does not spread unchecked. One such group – in the US, anyway – would be a national police force.

This is only part of a larger authoritarian drive, however. The Anglosphere power elite that apparently wants to run the world (formally) is using the current economic chaos to prepare fundamental, Draconian "reforms" to the way US business and investing works.

US President Barack Obama's persona and policies are surely tailored to this larger meme. Authoritarianism can be developed in numerous ways. We have, for instance, covered the new Pecora Hearings that we believe are being generated even now.

These hearings are not yet in evidence but we are sure they will be. In fact, secret efforts in Congress to set up such hearings have been reported by at least one alternative news website that then removed the article. But it seems obvious to us that these hearings are going to take place at some point.

The Pecora Hearings themselves took place in the 1930s. At that time, President Franklin Delano Roosevelt used them to blame the Crash of '29 and the Depression on Wall Street. It was a classic case of misdirection, in our view – blame Wall Street for what the central bankers did and Fedgov covered up.

In reality, the Depression was likely caused by the New York Fed over-printing dollars – a policy that created first the Roaring '20s and then the Depressed '30s. FDR first shut down banks and then confiscated gold to ensure that US citizens wouldn't find out there was not enough gold to redeem their over-printed dollars.

Now, in our view, the power elite is replaying this tactic. In order to create world government, it helps if governance in general is strengthened. This is taking place around the world even now via austerity measures and a campaign through the West to "punish corruption."

The same patterns that made the 1930s such a tragic decade are being repeated as the 21st century faces its second decade. When government has too much power, things can go wrong very quickly. And then the temptation is to point fingers at the private sector to find a scapegoat. Here's some more from the letter about setting up a national police force:

In 2008, the Missouri Highway Patrol was alerted that people who supported Ron Paul, Bob Barr, the Constitution Party, Libertarian Party, Second Amendment Advocates or the John Birch Society, or who were devout Christians, were potential terrorists … One of the most constitutional forms of local police is the constable system …. Support your local police. Keep them independent and working for the citizens.

Enlarging law enforcement may make it more "efficient" but certainly not better. The larger the amount of monopoly power a law enforcement agency has, the more damage it can do. Canada is experiencing this even now with its own national force, the Royal Canadian Mounted Police.

According to the Globe and Mail, the RCMP's new boss, Bob Paulson, has his hands full. He's got a sex controversy to deal with, first of all. "[It was] rekindled last week when a high-profile female British Columbia Mountie said she spent years being treated as a potential sexual plaything by some supervisors."

Then there's another grievance against the RCMP for "insults and threats" that was just affirmed by the organization's independent review body some three years after charges were filed. The grievance is part of a larger "systemic failure to deal appropriately with harassment within the force," according to Federal Public Safety Minister Vic Toews.

Meanwhile, a 2006 commission of inquiry said, "information the RCMP passed to the United States was likely responsible for Maher Arar being shipped to Syria, where the Canadian man was tortured into making false terrorism confessions." And then there is the case of the confused Polish visitor who was tasered by Mounties at the Vancouver airport. That led to another inquiry.

In the US, Homeland Security's TSA, a nationalized security force, is constantly embroiled in controversy over its tactics and the rationality behind some of its strategies. Most recently (and once again), the agency has been accused of strip-searching elderly people. The agency also faces considerable public protest over the scanners that it has installed, which may provide people with fairly high doses of radiation.

US President George W. Bush tried to set up a national police force and now the Obama administration apparently is making common cause with the Southern Poverty Law Center that has created an ideological template that can tie numerous civilian police forces into one larger entity.

Fortunately, these efforts are being resisted publicly and aggressively, as the Internet is continually making people aware of these authoritarian efforts. Obama has not yet been able to set up a formal national policing body. Maybe he will run out of time.