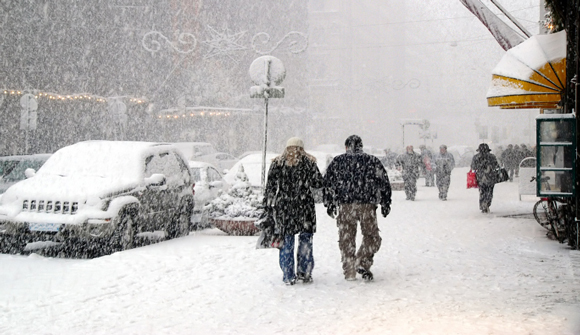 My wife says I'm weird and she is probably right. First, I personally love cold weather, mountains and skiing, so why am I looking south? Maybe it is because the words of Jimmy Buffet's "Changes in Latitudes, Changes in Attitudes" keep going through my mind.

Well, I enjoy cold and snow when it is out in the mountains surrounded by nature but being in a big city of almost 5 million people, the snow turns dirty within hours and my dog gets the salt stuck in her paws so she limps along when we take a walk. Canadian cities are especially nice, as crime is low, the people are friendly and helpful and the opportunities for great food and nightlife are endless.

Still, it is almost noon and the current temperature is zero Fahrenheit so this could be part of the problem. Now, heading south can mean different things for different people. Some go to Florida and others to Arizona during the winter months and this works for them if they are only climate challenged.

For me, big cities and cold weather can get me down but as the title reads, I'm also looking for changes in attitudes in addition to changes in latitudes. As an American living outside the country, attitudes back in the US are increasingly difficult to understand. The idea that government can solve our problems or create prosperity are simply untrue even if the majority of people believe this to be true. Studies show that basically 50% of American citizens live off of government employment or benefits so maybe I'm wrong, at least until the productive 50% gets fed up with the other 50% living off of them and this really seems to take some time.

Is the productive US citizen willingness to be taken advantage of after every election because they don't realize the real situation they live in? How powerful is the establishment news propaganda effort in America today? Well, certainly the entertaining 24-hour news cycle on the major networks in the US does dramatically impact public opinion and overload the ability of even those who also get alternative views on the Internet to see the world like others do outside the country.

Maybe it is because in Canada and elsewhere in addition to alternative news on the Internet our access to cable news programs is far superior to the United States. Yes, we can watch the dumbed-down leftist cable news channels like CNN and the big three network news programs or the even more dumbed-down neocon Fox News channel with beautiful women but not much intellectual stimulation or substance. But also, we can get non-Washington/NYC centered news without the special interest controllers and expert hacks out pushing the leftwing PC agenda that has totally transformed the free America where I grew up into a socialist PC tyranny more like the 1984 novel than a formerly free America.

Outside the US I can more easily watch the English channels ranging from France 24, Russia TV, the BBC, the CBC, to Aljazeera and see news and opinion that, while always prejudiced toward their jurisdiction, is without all of the US centered propaganda and misinformation so prevalent and overpowering on American news.

So I am looking for a less controlled and more freedom oriented attitude outside the USA. I believe this can be found where people concentrate their lives away from the TV screen and enjoy a more social outdoor lifestyle where indoors and outside living merge together in a perfect climate. This is very possible in the mountains of Colombia.

Imagine Terra Viva, a community where the green mountains and topography look like Switzerland, the prices are rock-bottom compared to the United States, Europe or Canada and the climate year-round is just plain perfect. No heat, air conditioning or screens required in a modern day climatic Garden of Eden just two hours – soon to be one hour when the freeway is completed – from a metropolitan city with shopping, restaurants, culture, art and Latin-style nightlife second to none.

I urge readers to join Anthony Wile in Medellin, Colombia for one of the upcoming meet and greets (for info email Caroline@TerraViva-Colombia.com). You'll be glad you took the time and opportunity for a look at the new Colombia and to visit this unique, invitation-only safe haven community.

Ron Holland can be reached with questions or comments at Ron@HAIM.li.