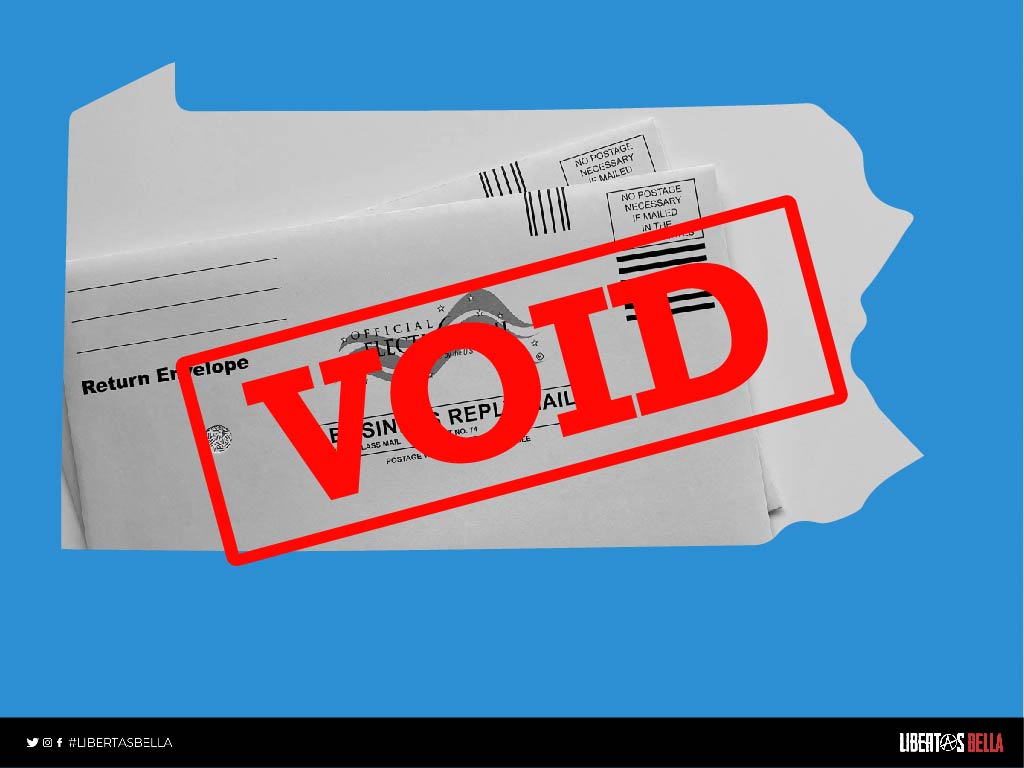 Regardless of where one falls politically, the sanctity of the vote is a bedrock of a functioning representative democracy. Voters have to believe their vote matters. And that the vote is free, fair, and accurate.

Below we explore the details and the data of what happened in Pennsylvania, nicknamed “The Keystone State“, on Election Day. Elsewhere we explore similar efforts in the key swing states of Wisconsin, Michigan, and Georgia.

Voter turnout was up everywhere. This was expected due to the highly partisan and hotly contested nature of the election. However, there is something worth taking a closer look at in the Commonwealth of Pennsylvania — namely the incredibly lopsided impact that mail-in ballots had on the election.

We’re not sure how many mail-in ballots went for Biden in Wisconsin because the data has not been released. However, despite what we were told about how Biden would dominate in mail-in ballots, Pennsylvania is the only place of which we’re aware that this was actually true. Biden tended to be up single digits where he was ahead through mail-in ballots.

Such a lead might not be noteworthy if it were not so anomalous and indeed, it is — Michigan, the other state where Biden had a lopsided mail-in ballot victory, had him leading by only 37.9 percent. The next biggest advantage was in Ohio with a comparatively paltry 15.3, the next Arizona at 8.1, with other swing states putting up only single digits.

What’s more, Pennsylvania was another state where vote-counting was paused with the Vote Fairy showing up in the middle of the night to drop obscene amounts of ballots, all marked for former Vice President Joe Biden.

Two examples of such dumps were reported on by left-leaning FiveThirtyEight on their Twitter feed: 23,277 votes came in from Philadelphia, all of them for Biden. 5,300 votes in Luzerne County, which includes Wilkes-Barre, with nearly 4,000 of them for Biden. This was on November 4, the day after the election, when the number of outstanding ballots miraculously increased throughout the day.

Another vote dump went for Joe Biden by a 92-8 margin, something that might have been plausible in Saddam Hussein’s Iraq, but not so much in the United States.

Pennsylvania law does not allow for mail-in ballots to be counted in advance, which is rather convenient for anyone seeking to rig an election. Simply wait for the other side to count their ballots, then fabricate as many as you need to put your candidate slightly over the top.

Pennsylvania’s Secretary of State, Kathy Boockvar, a Democrat, has stated in the lead up to the election that votes arriving late will be counted and that they don’t even require a postmark to do so.

This means that the “ballots” could be sent at any time, from anywhere in the world, but will count for the purposes of tabulating the final vote. The Pennsylvania Supreme Court upheld this decision, which is a flagrant rewriting of state election law from the bench.

James O’Keefe of Project Veritas has found at least two whistleblowers from the United States Postal Service, one of whom was willing to come forward with his real name and work with federal investigators.

The whistleblower who came forward with his name is from Pennsylvania and claims that postal workers were instructed to illegally and fraudulently postmark ballots sent after the election so that they could be counted when the ballots arrived.

Philadelphia is known as a bit of a poster child for election fraud in America. As in Michigan, the dead are voting by mail-in ballot. This is nothing new: Joe Frazier “voted” in 2018, while Will Smith’s grandfather voted in both 2017 and 2018. We are already receiving reports that the practice of the dead voting in Philadelphia is, pun intended, alive and well in 2020.

Fully 98,000 people voted for Joe Biden and no one else in the Commonwealth of Pennsylvania.

Allegheny County, home of Pittsburgh is home to a rather shocking “irregularity.” Full ballots, with the appropriate markings to be read by machines, were available for download for anyone. There was a similar situation in Bucks County.

Supreme Court Justice Samuel Alito ordered Pennsylvania to segregate late-arriving mail-in ballots, which are currently at the center of a legal controversy in the state. Pennsylvania refused to do so.

Mike Roman, a Trump advisor and election security expert, claims that ballots were being processed and duplicated away from the watchful eyes of Republican observers — who were notified at 1 a.m. that this process would begin at 7 a.m.

Mail-in balloting is not secure. In fact, it was banned in France in the 1970s for this reason. In the Blockchain era, there is no reason to rely upon such primitive means of voting when one can’t make it to a polling station. But Pennsylvania Democrats are using the technological limitations of traditional, mail-in paper balloting for their own political gain.

Pennsylvania was likewise one of several states where those seeking to watch the vote count, as is their legal right, were chased off by poll workers who preferred to do their work in secret. Indeed, the state Democratic Party went as far as to try and get courts to uphold their expulsion of Republican poll watchers from the counting.

Pennsylvania is perhaps in need of poll watchers more than most. As recently as 2015, there was a massive vote-fixing scheme in the city of Philadelphia, orchestrated by the Democratic Party.

It would be naive to expect that elements in the Democratic Party would rig a vote to control property taxes and municipal bond issues, but would not do so to help tip the scale to elect a Democrat to the White House, with all that entails.

There are numerous examples of poll watchers being cordoned off many yards away and having to use binoculars to observe the count, as well as being outright chased off during the ballot counting process.

Indeed, Ron Coleman has done yeoman’s work documenting this on his Twitter. Here are three posts in particular that are worth looking at where he summarizes what direct observers and citizen journalists have uncovered with regard to Pennsylvania election shenanigans.

This viral video details how poll workers worked to obstruct legal poll watchers in the state. Jack Posobiec, one of the main forces on the ground for the #StopTheSteal movement likewise has a video of poll workers illegally expelling poll watchers.

Poll workers — the ones who don’t want anyone seeing what they’re doing — are involved in the vote “curing” game. This is a process whereby poll workers take ballots and attempt to divine what their intent was to “correct them.” The Trump campaign won an injunction against admitting such ballots on November 5, 2020.

Aaron J. Carpenter, a conservative elected official from Ohio, reported that some 300,000 ballots were counted without a Republican poll watcher present at the time. This brings into question a massive number of votes in Philadelphia alone.

Legal Action to Protect the Vote in Pennsylvania

The Silver Lining: How You Can Fight Back

This is a very grim topic and you are right to be outraged and maybe even a little scared. But we’re here to tell you that you don’t have to take this lying down. The President isn’t and the Congressional Republicans are quickly falling in line. The Utah Attorney General has even taken a temporary leave of absence to join the President’s fight to ensure the integrity of American elections.

So what can you, an average citizen do to stop the greatest election fraud in American history?

First, call your elected representatives be they friend or foe. Emails are great, but phone calls are much, much better. You should call your state rep, your state senator, your House Rep and your U.S. Senator. You should also call your state Speaker of the House. This is particularly important if you live in a state like Wisconsin, Pennsylvania, Arizona, Michigan or Georgia where there is ample reason to demand greater transparency and a full auditing of all votes.

Be respectful, but firm. Let them know you’re not interested in talking points and boilerplate: You want to know what they’re doing right now to ensure the integrity of the vote in your state. Let them know that if they want your vote you expect concrete action to ensure that all legal votes are counted — and absolutely none that aren’t.

For those interested in taking to the streets, there is the Stop The Steal movement. In Pennsylvania, this is being headed up by Jack Posobiec of One America News Network and Scott Pressler of #ThePersistence. The movement holds rallies at state capitols and places where votes are being counted to let your elected officials know that you’re holding them accountable. What’s more, a nationwide rally in DC called the Million MAGA March is scheduled for November 14. The Democratic government of Washington, DC has responded with new COVID restrictions designed to cripple the march.