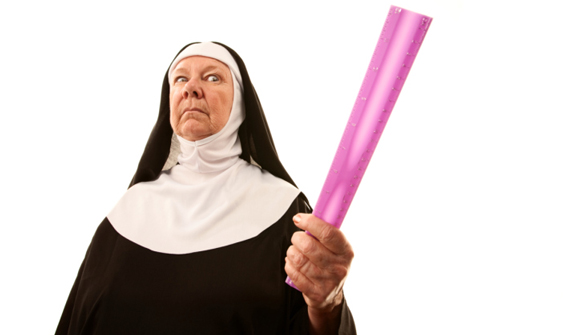 Hanging women thought to be witches in Salem, Massachusetts in 1692 and 1693 was probably the pinnacle of religious Puritanism.

That type of Puritanism used God and the Bible to force its own form of tyranny on anyone who challenged its authority.

But Puritanism doesn’t need to be based on God or the Bible. All it needs is fanatics convinced that their worldview is the only moral way and that others must be forced to adhere to it.

Puritans ignore logic and reason and stick to their dogma. That often leads to some form of a witch-hunt and “public hanging.”

Here are five signs that you’re not really a tolerant free thinking warrior for social justice, but actually a Puritan psychopath.

1. Sex is to be strictly regulated

This one is actually pretty similar to the religious Puritans.

Today’s Puritans have banned any talk of sex for fear that it will be classified as an unwanted sexual advance. People are terrified of sex because pursuing it in the wrong way could land them at the gallows. Even sex jokes are off-limits.

Some sex-Puritans even maintain that it is impossible for a woman to consent to sex with a man. Others say that just being asked out against their will is a form of sexual assault.

2. You can’t remember the last time you were wrong about anything.

You know all the data… even though you really haven’t read a book in a while.

And you’ve considered every side… even though you only get your news from echo-chamber websites.

You’re totally open-minded… except to opinions you regard as “hate speech”… which is basically any opinion that differs from yours.

But you’ve got the whole world figured out down to a T. And you are sure your worldview is the only good and righteous way to see things.

If people don’t see things your way, that itself is proof of their bigotry, prejudice, sexism, and intolerance.

And you won’t tolerate that.

3. You think some ideas are too dangerous to be discussed.

Some views must be silenced because they are too dangerous to be tested in the marketplace of ideas.

This really means you see other people as inferiors, lacking an internal moral compass, or too weak to resist the gravitational pull of dangerous ideologies.

You think it is perfectly reasonable to ban people from saying certain things that might offend someone, or plant a dangerous idea in the mind.

Of course, nothing you ever say could be reasonably seen as offensive…

Anyone who says otherwise is being dishonest. You know this to be the case because…

4. Evidence is not required– you already know.

It’s like you have a sixth sense that can always tell you when someone is guilty of a transgression. Their evilness manifests itself in their appearance.

Your paranoia leads you like the inquisition to see hidden signs of white supremacists and micro-aggressions everywhere.

And like a righteous and holy judge sent from the heavens, you will condemn the transgressors for their sins.

5. You reject the scientific method when it doesn’t support your dogma.

Sometimes you use phrases like, “the science is settled,” to cut off any discussion or debate.

That is a direct contradiction to the scientific method, in which nothing is ever settled. Debate leads to clearer and clearer truths.

The Salem Puritans knew it was the devil causing the stricken girls’ illnesses–that was not up for debate. And after all, the Puritans were the educated ones, they even started Harvard.

But other times, science itself is offensive, such as saying someone with an XY chromosome is a biological male. And that’s not up for debate either (See 2-4).

So if you think of yourself as progressive, just make sure you’re not actually regressing to a state of Puritan tyranny.