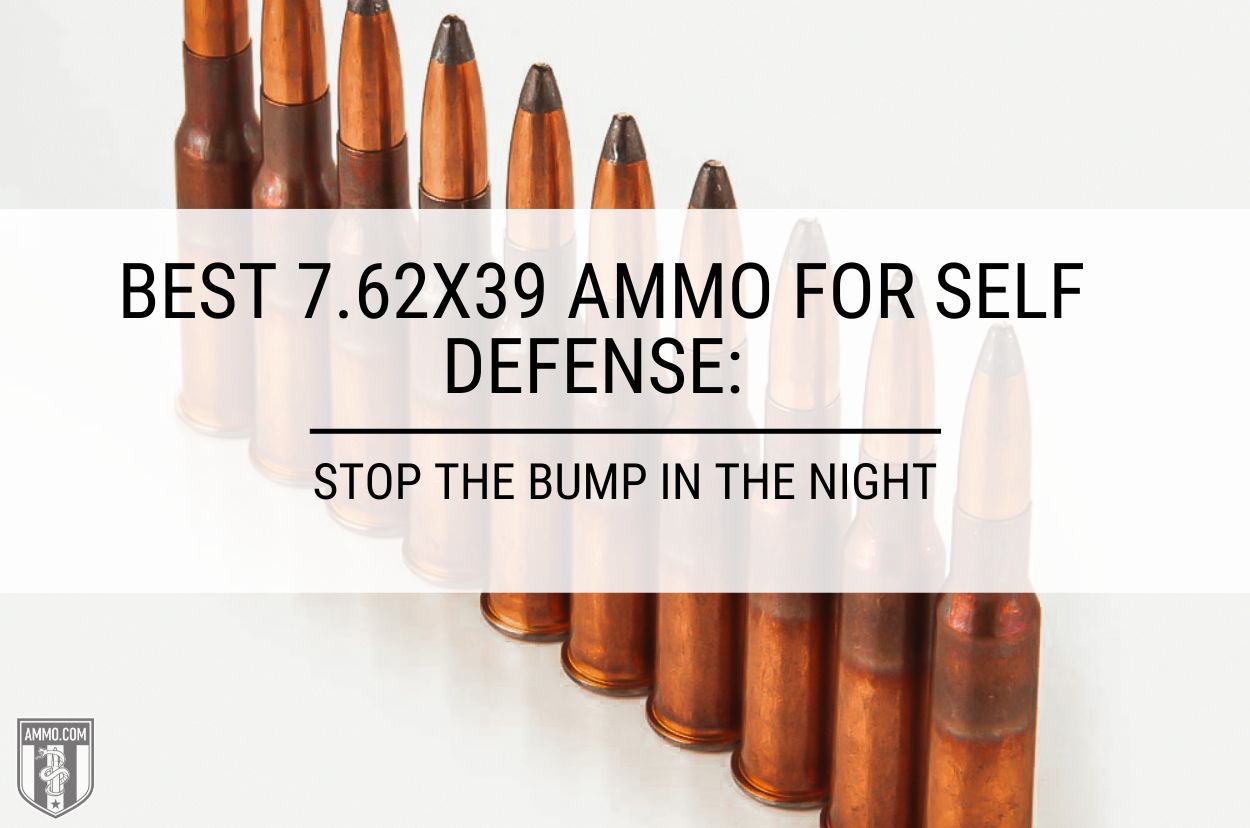 It’s been a long day at work and you’re exhausted, with every passing moment your eyes feel heavier and heavier. Then suddenly you hear the *THUD* of someone kicking down the front door! Hurried footsteps race toward your bedroom door and you only have seconds to react. Instinctually you reach for your trusty AK-47 and prepare to defend your home.

When seconds count in a home defense situation like this, it is NOT the time to be wondering what the best 7.62×39 ammo for self defense is!

Lucky for you, you’ve found this article and we are going to tell you exactly what to load into your AK mags or SKS stripper clips for any self-defense situation. If you simply cannot wait, the best 7.62×39 self defense ammo is Winchester PDX1 122 gr JHP.

If you’re new to the 7.62×39 and aren’t sure what to look for in a defense round, check out this Buyer’s Guide HERE.

Otherwise, scroll down just a little more for the list…

The Best 7.62×39 Self-Defense Rounds on the Market 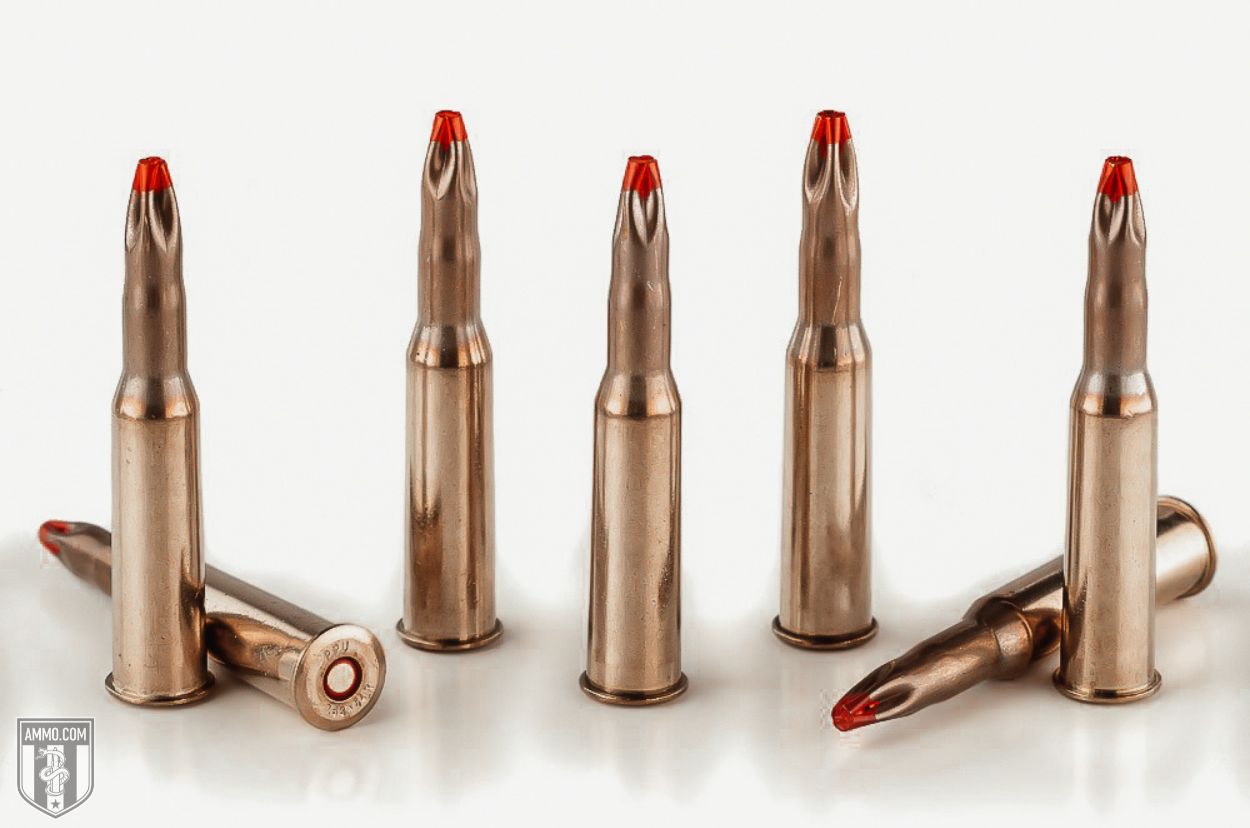 When it comes to self-defense handgun rounds, the Winchester PDX1 is one of the best hollow points you can load into your CCW pistol. But for rifle rounds Winchester developed a new hollow point that is unlike any other projectile on the market.

The Split Core Hollow Point bullet technology utilized in the PDX1 allows the rifle bullet to begin expanding immediately when it impacts soft tissue (AKA a bad guy). This helps minimize the over penetration potential for the bullet as well as improving terminal performance by retaining bullet weight.

Winchester PDX1 is brass cased and Boxer primed, meaning they are non-corrosive and perfect for reloading. This is a massive improvement over typical Berdan primed steel-cased ammo like Wolf, Tula, and Barnaul that are only good for one firing.

PDX1 ammo is a little more expensive than some of its competitors, but when your life is on the line you aren’t going to be too worried about how much a few boxes of self-defense ammo costs! For the ultimate in home defense, make sure your AK or SKS is loaded with Winchester PDX1 and you’ll sleep easy every night (just don’t forget to turn on your red dot before bed!). 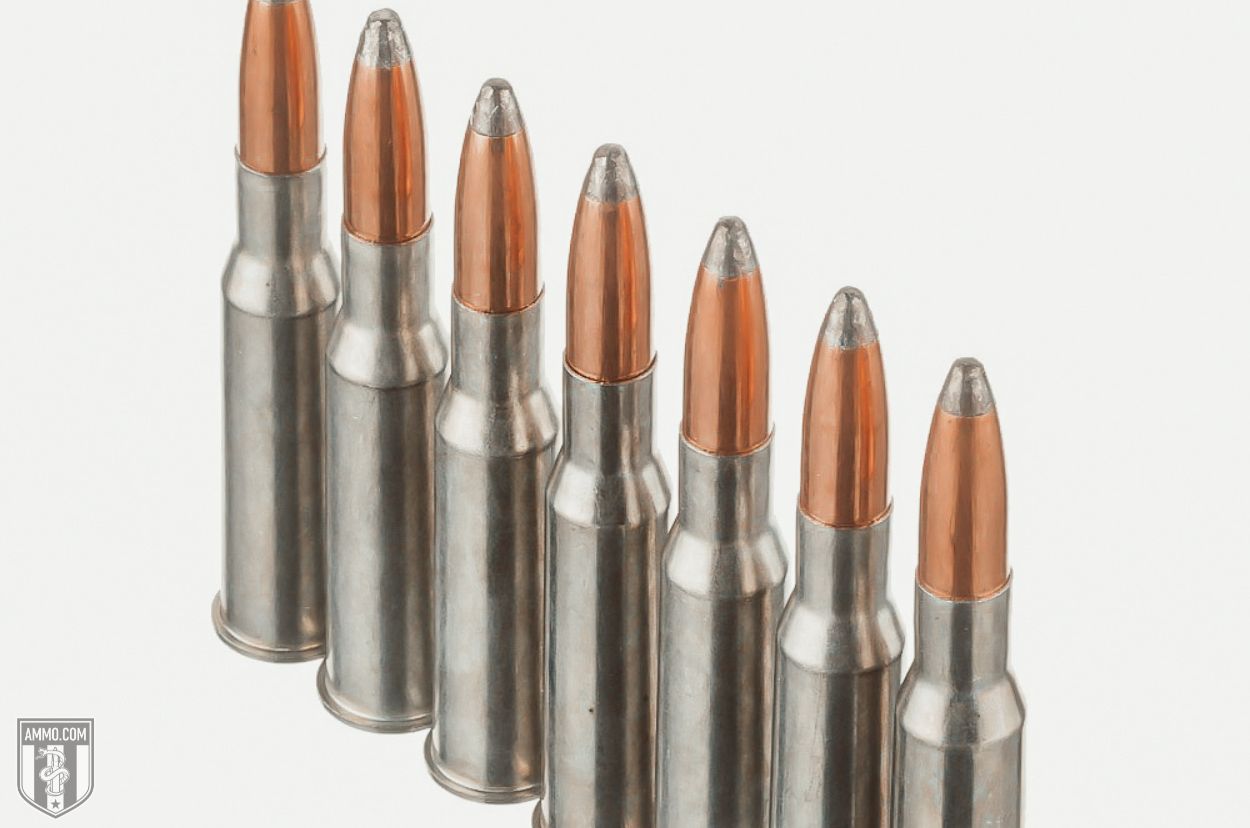 When you need excellent terminal ballistics, deeper penetration, and field-tested reliability, you should reach for Hornady Black 123-Grain SST ammo. Perfect for deer hunting and home defense, the Hornady SST is a true “jack-of-all-trades” bullet that fills multiple shooting roles.

The Hornady SST was developed with accuracy in mind, sporting a secant ogive, boat tail profile for an incredibly accurate and aerodynamic bullet holding true to Joyce Hornady’s, “Ten bullets, through one hole” view on accuracy.

In terms of ammo availability, the SST is somewhat easier to find and is slightly less expensive than PDX1 but still more expensive than steel-cased FMJ ammo. 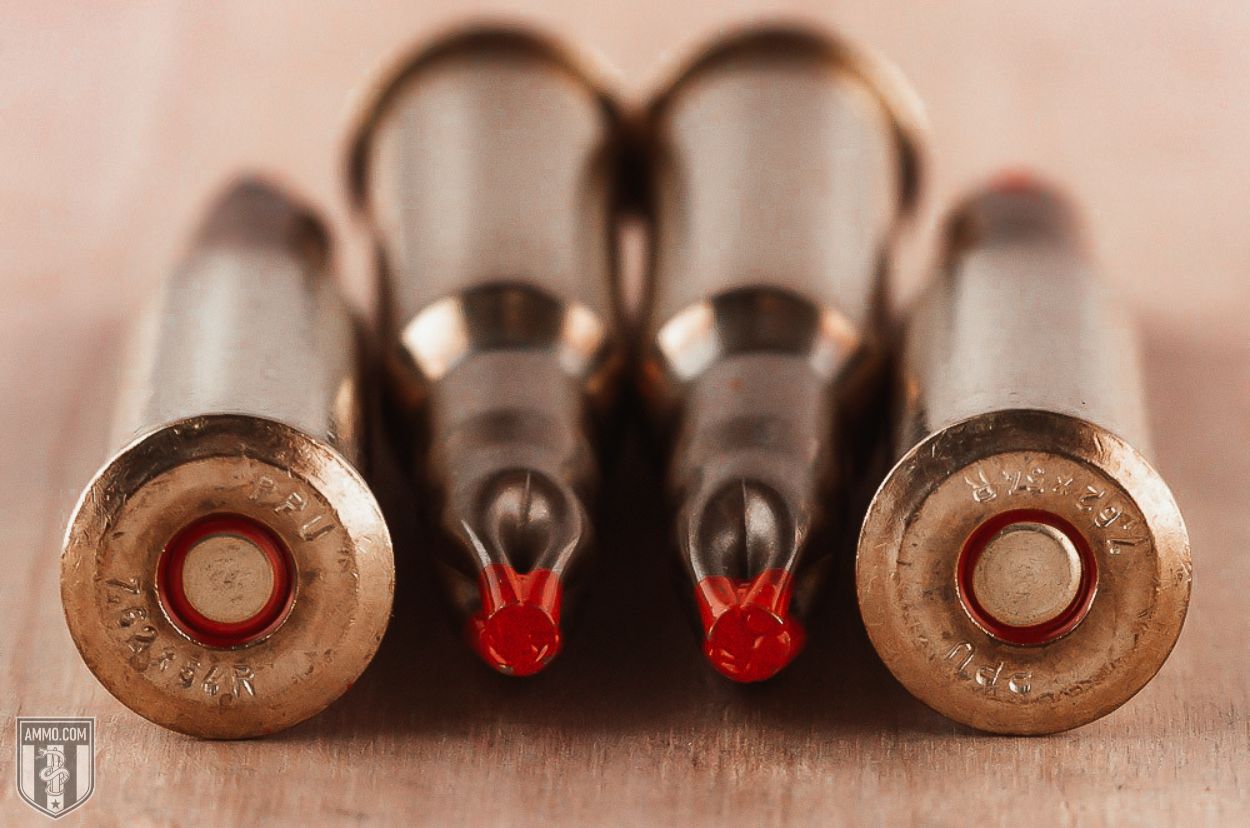 Federal Premium Ammunition is nothing short of a household name in the self-defense space with its extremely popular HST and Hydra-Shok lines for handguns. Although these hollow points are absolutely devastating in something like a Sig Sauer P320 or Glock 19, Federal does not have an equivalent 7.62×39 home defense round at this time.

However, what Federal is known for are their multiple deer hunting options. Federal Fusion is extremely popular for whitetail as well as our selection, the Power-Shok 123 gr JSP.

The Power-Shok soft point provides quick and effective expansion to minimize over penetration and penetrate deep enough to reach the vital organs.

Coming in as the least expensive American-made ammo on our list, the Federal Power-Shok rounds are like the meat and potatoes for the hunting community. They are cheap enough to use them for target shooting and varmint hunting, while powerful enough for deer hunting and home defense.

Not only does Federal help you keep precious dollars in your wallet, but it is also easier to find than the Hornady and Winchester factory loads mentioned above. This means you should have a much easier time stockpiling ammo for any home defense situation as well as hunting season.

The only downside to the Federal Power-Shok is its bullet design. Soft point bullets, by nature, are not extremely aerodynamic. This means they are not ideal for long range shooting. However, if you need to shoot over 150 yards for self-defense, then your house is a lot bigger than mine! 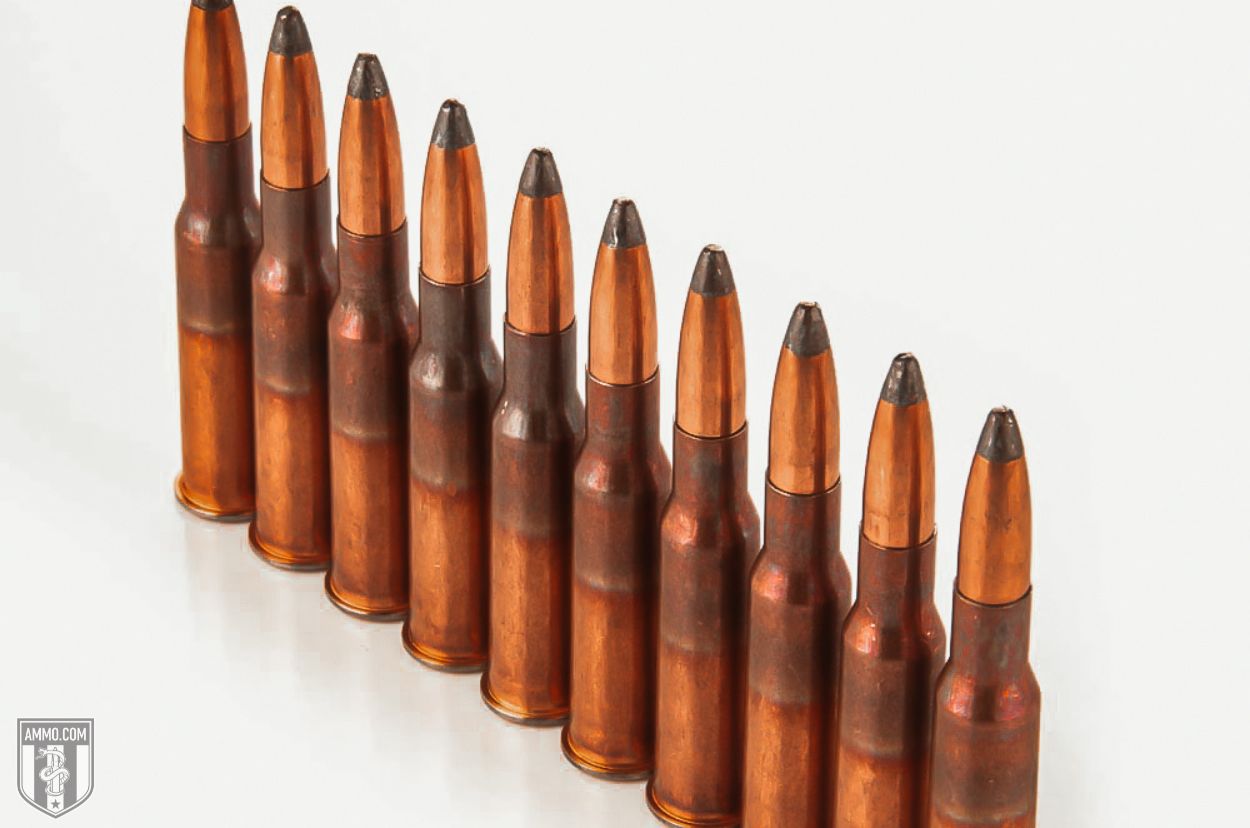 Rounding out our top 4 list we come to the only non-American made ammo self-defense selection in the Prvi Partizan 123 grain jacketed soft point.

Like the Federal Power-Shok, the Prvi Partizan (PPU) utilizes the older soft point bullet design to maximize bullet expansion and terminal ballistics. This is great for home defense, but it also suffers from the same lack of long range potential.

However, the PPU ammo makes up for this by having the highest muzzle velocity and energy on our top 4 list. This gives it a flatter trajectory than the other three ammo options, but it also introduces the potential for over penetration.

Coming in at the lowest cost per round on our list, the Prvi Partizan 123 gr JSP is a great option when you want to buy bulk 7.62×39 ammo for both deer hunting and for saving a few boxes for self-defense purposes.

Welcome to our buyers guide for 7.62×39 self defense ammo. There are a lot of myths and misunderstandings about 7.62×39 that we want to clear up in this guide. In it we will discuss what cartridge cases you should look for, the best bullet for self defense rounds, and how to save money on 7.62×39 ammo.

A lot has been said about the downsides of using steel cased ammo all over the net. If you want to read our full write-up about it, click on this link: Steel Cased vs Brass Cased Ammo.

If you want the Cliff’s Notes version instead, here’s the rundown:

Although this is just the tip of the iceberg, the bottom line is that most semi-automatic rifles on the market should be able to fire both brass and steel case ammo. The important thing is to test your chosen ammo in your rifle at the range before taking it into the woods or needing it for self-defense.

When it comes to self-defense ammo, generally you always want to use an expanding bullet to reduce over penetration.

However, many pundits on internet forums suggest that full metal jacket (FMJ) ammo is perfectly fine for self-defense. They point to the battlefield effectiveness of the round over multiple conflicts between the United States and its enemies across the globe.

It’s true that the 7.62×39 is an effective round and a boat tail FMJ bullet is very accurate. However, that doesn’t mean it’s the best choice for home defense.

Just because governments and militaries are bound by the agreements of the Hague Convention and must use FMJ bullets in warfare does NOT mean that you are bound by such contracts.

FMJ bullets are prone to over-penetration, meaning that they can penetrate through the bad guy and potentially hit an innocent bystander or a family member. This is a terrible situation that will have extensive legal and psychological consequences that you don’t want to deal with (or pay for!).

FMJ bullets are great for target practice and plinking, but not the best choice for home defense.

Make sure that your home defense mags or stripper clips are ALWAYS loaded with expanding bullets and you’ll be ready to go.

One of the best aspects of the 7.62×39 round is that it is easy to buy in bulk. This helps you keep your cost per round as low as possible by buying a lot of ammo all at once. Although the up front cost is a little higher than buying one box at a time, buying in bulk ensures that you always have plenty of ammo for target practice or plinking.

However, there are two very different types of bulk ammo that we want to talk about. Let’s get into it!

If there’s one thing the Soviet Union was good at, it was producing ammunition. During the decades following WWII, the Soviets mass produced 7.62×39 for the AK-47, making it one of the most common cartridges across the globe.

The Russians hermetically sealed their ammo in spam cans so it would be combat-ready even decades after it was manufactured.

After the fall of the Soviet Union, the Russian Federation looked to liquidate some of its surplus ammo stockpiles by selling it to us Capitalist dogs at an extremely low cost per round.

Surplus ammo is excellent if you want something cheap to shoot, but it has a few problems you need to be aware of.

The biggest issue is that it’s corrosive.

To be more specific, the Berdan primers used by the Russians had corrosive salts in them. To read more about corrosive ammo, check out this article: Corrosive Ammo Explained.

To summarize the article in a few words, you can safely shoot corrosive ammo in any of your firearms so long as you follow the cleaning procedure outlined in the article. It adds an extra step of complexity that most shooters don’t want to deal with.

Berdan primers are also a pain in the buttstock to remove, so if you plan on handloading your cases you should probably skip surplus ammo.

And this leads us into the second category of bulk ammo, which is…

Modern bulk steel cased ammo comes from manufactures like Wolf, Tula, and Barnaul. Generally, it is slightly more expensive than surplus military ammo, but it has some major benefits too.

Although these rounds will still be steel cased and not suitable for reloading, most shooters find that modern bulk ammo is more consistent and accurate than older surplus ammo. This is thanks to tighter modern manufacturing tolerances.

This is not to say that surplus ammunition is not accurate, as many shooters report great accuracy from spam can ammo. However, most shooters find that modern ammo is more consistent than older surplus ammo.

Wolf ammo is particularly popular with the AK crowd, as their Polyformance line of ammo uses a polymer coating to ensure worry-free feeding and extraction for an enjoyable time at the range.

If you’re wondering what the best AK ammo is, check out this article: 4 Best AK-47 Ammo Picks.

Now that you have a clearer understanding of what to look for in your self defense round, let’s get back to our top 4 list by clicking HERE!

Best 7.62×39 Ammo for Self Defense: Stop the Bump in The Night originally appeared in The Resistance Library at Ammo.com.