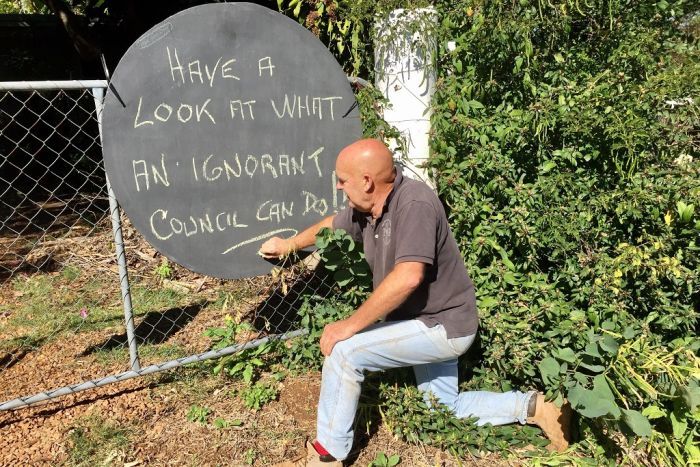 Imagine working for seven years to build a community food forest. It would be a very fulfilling project to take a neighborhood and transform it into a living food source full of fruit trees, luscious vines, and edible ground cover.

And imagine all your hard work being torn away in an instant by the city council.

Literally torn away; what would you be thinking and feeling as they sent landscaping crews to tear out the trees, some with fruit still one them, and grind them into wood chips.

Unfortunately, what could only be a feeling of utter exasperation and crushing disbelief was forced upon residents of Sunshine Coast, Australia. The people of a section of the city banded together to transform 11 city blocks into a food forest of which at least 200 people enjoyed the fruits.

The city council felled an entire stretch of this Urban Food Street, even preventing residents from collecting the fruit before the destruction.

Councillor Ted Hungerford said the felling of the trees was disappointing, but the council was left with no option after a resident had not applied for a permit, nor opted to relocate the trees to private property.

He said the requirement for a free permit and public liability insurance applied throughout the region, and so far 23 residents had fulfilled those requirements.

Another 10 residents had removed or relocated the trees to private property.

Cr Hungerford said this morning’s actions came after many months of negotiations, and the landholder for the three properties had also been issued with $609 infringement notices for each property.

Another four properties have compliance notices due in June.

And here is a perfect example of the insanity of government at every level. Here are people coming up with real solutions and productive community activities. But all the city council can do is gripe about permits and liability insurance.

Some residents said they didn’t even know about the requirements, but that hardly matters. What matters is that some bullies in the local government care more about pieces of paper than human beings. They care more about protecting their worthless pathetic City Council jobs, and probably imagine themselves quite the adept local governors. Clearly, they are out of touch with reality.

Because the city claims ownership over the property in front of people’s homes where a sidewalk would go, they were required to get permits to have fruit trees in that space — and most everyone did. However, because one resident didn’t apply for a permit, the entire area was leveled.

Resident Gail Felgenhauer told ABC that the council was belligerent, bullying and discriminatory.

“We’ve had multiple meetings and presented multiple options and ideas for solving their imagined problems,” she said.

And despite ornamental plants strewn about the roadsides throughout the Sunshine Coast area, it was only the fruit trees the city council had a problem with, complicating things further by requiring insurance.

Ms Felgenhaur said the citrus fruit from the felled trees would have been enough to provide about 12 months worth of jam for residents.

“And there was a dozen or more paw paws, beautiful paw paws … that lovely resident over there who has a physical disability, he ate the paw paws regularly,” she said.

Imagine if every neighborhood grew an organic food forest. The benefits are voluminous; teaching kids about horticulture, providing free or cheap healthy food without pesticides, and increasing local food consumption (which decreases shipping costs and pollution). It also adds to the aesthetic beauty of a neighborhood and gives a sense of control, a sense of well-being. You are not so divorced from what you eat, it is not out of reach in an emergency.

Put the Pressure On Local Government

The solution here is pretty obvious: grab the pitchforks and torches and burn down city hall.

Just kidding, as satisfying as that would be. Rather, the residents of this city should clearly do everything they can to make sure those city council members do not get reelected, as well as investigate possible bribes from industries which would benefit from the destruction of a food forest. In the past, grocery stores have pushed city councils into cracking down on residential vegetable gardens.

They should probably also use some social pressure to make the councilors’ lives miserable.

When big fish in small ponds take actions like this, they deserve to be ridiculed by the community everywhere they go. Instead of excusing the enforcers and decision makers in our communities who act like their hands are tired, who do evil for a paycheck, and who stomp on the rights and lives of those around them, they should be made into social outcasts.

But for most of us, we can just not move to a town like that. Most local governments are still relatively responsive, even if grudgingly.

Recently a county in Oregon backed off their plan to spray poisonous glyphosate on an organic farm which failed to control invasive weeds. The law was changed to force private property owners to completely eradicate certain plants, whereas before they were only required to “control” them. The local government was going to ruin a business and 20 years of organic soil maintenance but backed off when they received thousands of angry calls and emails.

A similar case unfolded in Flint, Michigan where the city council put liens on homes of people who did not pay for their tainted, poisonous water. Again, after word got out and people from all over responded to tell them what they thought, they backed off and suspended the requirements for a year. We will have to see what happens when the year runs out.

If you would like to express to the Sunshine Coast Council what you think of their actions (in a constructive and non-threatening way), here is their contact information. And here is their Facebook page, where the council actually brags about recycling plastic bags and promoting work in the agriculture industry! A bit ironic.

People spend a lot of time, effort, and money landscaping their yard with pretty, but useless plants. Planting a food forest is a great investment, as it provides nontaxable income (fruit). It is also a hedge against uncertain economic conditions–worst case scenario, you will have something to eat.

At this point, everywhere that people live could be turned into vast food forests completely transforming our ideas of where food should come from. Imagine the freedom, health, and community that this transformation would promote. It would be quite the upset for the food industry.

Personally, I prefer to do these types of things on private property so as not to run into issues with what local authorities might think. Of course, this means it is not a community project, but rather a personal one. It depends on your goals.

Check out this video of the food forest which I am building. It’s only a year and a half old, so many of the trees and plants are still small and relatively unproductive. But hey, got to start somewhere!