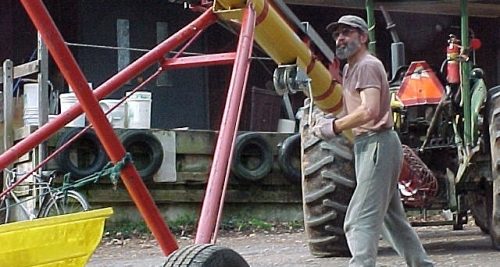 When is a commune not a commune? When it only exists because of capitalism.

But that doesn’t stop it from having just enough communist ideals to make it a very restrictive place to live.

Twin Oaks is an “intentional community” in Virginia. It is one of the oldest successful communes in America because it’s not really a commune. They manufacture hammocks that sell for up to $100 each, and make tofu for Whole Foods.

They have a sales and marketing manager who oversees each business. And they provide extra incentives to do the work no one else wants to do.

“Well, then we can’t sell our tofu for as much,” he said.

Maybe the Whole Foods workers should seize their means of production to stop the exploitation.

I was all set to tear apart Vice’s piece on this little commune. But I ended up just giggling. Vice correctly pointed out that it isn’t really a commune if it is funded by capitalism. The people who live there have stepped out of a typical “capitalist structure” for their lives. But they were only able to live their alternative lifestyle because they do so in a capitalist world.

That means 100% taxation and no individual control over how the products of your labor are spent.

But as much as they don’t want to admit it, there is still a hierarchy of sorts. They give extra to those who work extra. They have managers to oversee the businesses. And they have two types of members: provisional, and full.

In the philosophy of a commune, it might make sense for the workers to take home little to no pay, and forfeit control of their property. But consider that the “commune” brings in $600,000 per year in profits.

Members don’t pay to get into the community, and they don’t get anything when they leave. This means it is hard to see a member’s time there as an investment in the future unless their future is at Twin Oaks.

Like a typical factory job of the proletariat, they are unable to amass capital and stuck in their position.

They are required to work 40 hours per week. They have quotas to hit for work, with some extra incentives thrown in for extra hard workers. Producing more than your quota means you get to keep some of the product of your labor. Not exactly to each according to his need, from each according to his ability. But that is what is required to make their for-profit “commune” work.

So doesn’t that make it a business? It seems like members are basically typical proletariat workers, except that they don’t make any money. They forfeit total control over their lives and get to be taken care of by mother corporation.

And from a capitalist perspective, it makes perfect sense. If the company profits were broken down by person, it would $60,000 each. But you know their food, housing, health insurance, and other provisions aren’t costing the business anywhere close to that.

For a member, it seems like quite the hefty price to pay for the simple luxury of not having to worry about paying the bills on your own terms. Twin Oaks gets full-time workers for a fraction of what it costs most companies.

You don’t pay to join. You don’t get anything when you leave. The Community supports you while you’re here. Twin Oaks Provides for its members on the basis of need or equality. Equality is a fundamental community value which informs the property code. We try to avoid displays of wealth which may give rise to envy. With the exceptions described below, we expect members not to use outside income or pre-existing assets during their membership in Twin Oaks.

So all you can take with you when you leave are the skills you gain. They do seem to teach some–relatively menial–skills. Also, if full members decide to move on, they get $50 from the leaving fund (which actually seems more insulting than getting nothing).

They don’t expect you to give them all your property upon arrival. But they do encourage lending your cars, large equipment, and even money to the community for the time of your stay. These will be returned when you leave, without interest.

They do require all “unearned income” be donated to the community.

Unearned income includes interest on bank accounts, dividends on stocks and bonds, income on investments, social security, disability payments, pensions, and child support for a child living at Twin Oaks. Unearned income is the property of the Community.

As such, they discourage anyone with much wealth from moving into the community.

And any spending you do while you live at the commune must be approved by other members.

Oh, and they also expel any “undesirables.” Failing to give your unearned income to the community would be a reason for expulsion to be considered.

Ironically, their website states there are “classes of membership.” As much as they claim to want to avoid hierarchy, they still have provisional members and full members. Basically, the community can vote anyone out. There are a few steps and procedures, and some suggested reasons for the oustings, but the process comes down to mob action.

They also aren’t exactly accepting of “pensioners” because they can’t work as hard, and therefore might sap more from the community than they give. The community does offer health insurance, so maybe that’s why they are a tad on the discriminatory side towards old folks.

So basically, it is not a commune, and it is not a free market. It is the worst of both worlds. An extremely restrictive community that makes money off their laborers. You give your labor, and “unearned income” to the community, and you get a place to live, food, and health insurance.

The central “government”–which in this case is a corporation–owns all the means of production, controls all the wealth of the citizens, and provides for all their needs.

In that sense it is technically a success, but only because they have a source of income from a non-communist outside world.

The big takeaway: communist “utopia” exists (if your idea of utopia is surrendering your freedom in exchange for a safety net). But only inside a capitalist world.

But hey, these people are doing it all voluntarily. If that’s the life they want, so be it. I can accept their commune because it doesn’t place any obligations on me.

A free market does not rule out the possibility of little separatist communities that behave much like communes. It’s just that they can only exist because of the larger capitalist structure of society.