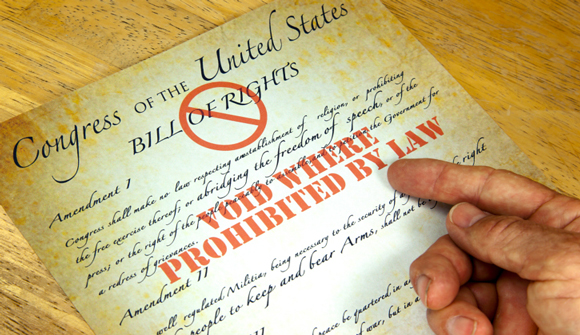 STAFF NEWS & ANALYSIS
A Danger to the Constitution? Solutions Must Be Individual
By Staff News & Analysis - December 06, 2013

Turley: Obama's "Become The Very Danger The Constitution Was Designed To Avoid" … REP. BOB GOODLATTE (R-VA): Professor Turley, the constitution, the system of separated powers is not simply about stopping one branch of government from usurping another. It's about protecting the liberty of Americans from the dangers of concentrated government power. How does the president's unilateral modification of act of Congress affect both the balance of power between the political branches and the liberty interests of the American people? JONATHAN TURLEY: Thank you, Mr. Chairman. The danger is quite severe. The problem with what the president is doing is that he's not simply posing a danger to the constitutional system. He's becoming the very danger the Constitution was designed to avoid. That is the concentration of power in every single branch. (House hearing, December 3, 2013) – Real Clear Politics

Dominant Social Theme: President Barack Obama's reckless use of presidential authority is a danger to the freedom of the United States.

Free-Market Analysis: This RealClearPolitics transcript is taken from a recent House hearing that featured Professor Jonathan Turley, someone who is #38 among US "public intellectuals."

In the excerpt of his address to Congress above, Turley registers concern that President Barack Obama's actions are a present danger to the freedoms of US citizens.

Our question: Where have you been, Professor Turley?

This Newtonian orbit that the three branches exist in is a delicate one but it is designed to prevent this type of concentration. There is two trends going on which should be of equal concern to all members of Congress.

One is that we have had the radical expansion of presidential powers under both President Bush and President Obama. We have what many once called an imperial presidency model of largely unchecked authority.

And with that trend we also have the continued rise of this fourth branch. We have agencies that are quite large that issue regulations. The Supreme Court said recently that agencies could actually define their own or interpret their own jurisdiction.

"The Newtonian Orbit that the three branches exist in is a delicate one …"?

Good Lord. There is no Newtonian Orbit left if there ever were one.

These occur top-of-mind. There is much more, of course. But hasn't Turley noticed any of this?

Who is Turley? Here's his bio.

Professor Jonathan Turley is a nationally recognized legal scholar who has written extensively in areas ranging from constitutional law to legal theory to tort law. He has written over three dozen academic articles that have appeared in a variety of leading law journals at Cornell, Duke, Georgetown, Harvard, Northwestern, and other schools.

Professor Turley is a frequent witness before the House and Senate on constitutional and statutory issues as well as tort reform legislation. Professor Turley is also a nationally recognized legal commentator. Professor Turley was ranked as 38th in the top 100 most cited "public intellectuals" in the recent study by Judge Richard Posner. Turley was also found to be the second most cited law professor in the country. He has been repeatedly ranked in the nation's top 500 lawyers in annual surveys (including in the latest 2010 rankings by LawDragon) – one of only a handful of academics. In prior years, he was ranked as one of the nation's top ten lawyers in military law cases as well as one of the top 40 lawyers under 40. He was also selected in 2010 and 2011 and 2012 as one of the 100 top Irish lawyers in the world.

And here is what he wrote on his blog before testifying:

This morning I will testifying in Congress before the House Judiciary Committee on "The President's Constitutional Duty to Faithfully Execute the Laws." The hearing will address areas where President Obama has ordered the delay or nonenforcement of federal laws. While I happen to agree with some of these policies, I have great reservations about this record and its implications for the separation of powers.

I hope to make it because I am fighting to get over the flu. My greatest concern is not to lose it before live on C-Span. Hopefully, that pained expression on my face will be interpreted as concern for the Constitution and the Republic. Also testifying with me will be Michael Cannon, Simon Lazarus, and Nick Rosenkranz.

Turley's greatest concern is "not to lose it" live on C-Span. But he might also reflect that the country whose system he evidently respects lost its freedoms long ago. Probably the Civil War marked the essential end of the Republic.

This is the trouble with the US's public discourse, and those who are doing the discussing. Their rhetoric seems entirely out-of-touch with the situation on the ground. If you can't describe a problem properly how are you going to arrive at a solution?

Use Rome again as an example – post-empire Rome. Did anyone expect the Roman Senate to rectify the wrongs of the empire or its loony emperors? Of course not. The Republic was dead and gone. Buried.

Can we really expect much more from today's US Congress? The concerns voiced at the behavior of Barack Obama could also have been aimed at George Bush, Bill Clinton, etc.

The sad fact is that the West is now subject to overwhelming globalist influence and the safeguards of government – such as they were – have long since been dismantled. Really, there are no countries, or even operative legislatures, merely internationalist agents at work in various regions and supported by rogue Intel agencies and black-ops military-industrial facilities.

To expect the US Congress or its reliable "public intellectuals" to turn the tide is to expect too much. Government, such as it is, is part of the problem not the solution.

The solution lies in individual human action – in the individual himself gradually becoming educated about the nature of the world and how he can individually best support his family, his friends and his local community.

The reality of federal politics is entirely removed from the individual reality; nothing good can from Leviathan any more than from imperial Rome.

We don't wish to unfairly single out individuals like Turley – who seems legitimately concerned by what is taking place. But, truly, even the so-called best of the West's public intellectuals cannot get the problem right.

And thus, solutions in our Modern Age are inevitably individual ones.