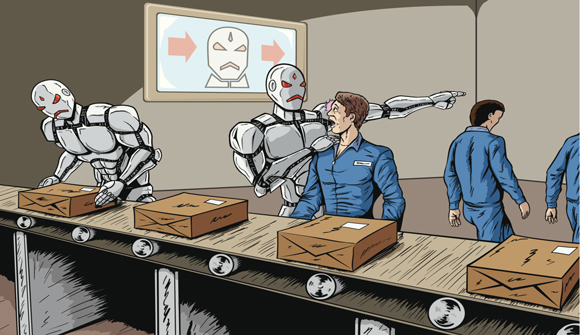 STAFF NEWS & ANALYSIS
A Lack of Freedom Is Destroying the Middle Class, Not Chinese Competition
By Staff News & Analysis - March 26, 2015

Guess What's Destroying the Middle Class? … Perhaps the biggest question in American political economy right now is why middle-class wages have been falling. There are three main hypotheses. Roughly, these are: Robots, unions and China. – Bloomberg

Dominant Social Theme: Something is always destroying jobs. People are helpless to withstand the challenges.

Free-Market Analysis: Once more this weary meme is dredged up. We suspect it will be regularly trotted out within the context of "robots stealing our jobs."

Imagine you were on a farm and robots were taking over all the menial tasks. The average economically illiterate person would suggest that sooner or later you would be out of work and starving on the street.

In reality, you might find the leisure time to experiment with plants and invent a kind of hybrid that grew better and faster. You would only find time to do this because your other tasks had been taken over by robots.

As a result of your plant experiments, your fruit and vegetable crops grew bigger, faster. Soon you were eating more vegetables and fruit and selling more as well. You were perhaps growing healthier because of your diet while gaining wealth from your sales.

So much for the zero-sum idea that inevitably when technology "steals" your menial job, you will immediately crawl off somewhere like a wounded animal to die.

The robots theory gets by far the most play in the news media, since it's by far the scariest — if automation is replacing big chunks of the human workforce, things are only going to get worse as robots become more capable and efficient. This interpretation has tentatively been embraced by many on the political right, since it doesn't imply a need for substantial government intervention in the economy (though it might imply a need for redistribution). The unions theory is favored by the political left, since it implies that giving more institutional power to this traditional liberal power bloc would shift the distribution of national income toward workers.

Neither side really wants to blame China. The right generally represents business interests and capital owners who have made a lot of money off of China, and hope to make a lot more. The left is afraid to go against the free-trade orthodoxy that has dominated postwar American economic thinking, and also fears a potential cold war with China. But there's just one problem: The evidence may point to least favored answer being the right one.

Having ruled out robots and union-busting, the article goes on to summarize the "research" that shows China's low-income productivity is destroying US jobs.

The first paper cited is from the National Bureau of Economic Research, by economists Avraham Ebenstein, Ann Harrison and Margaret McMillan. It finds that when wages are declining in the US it's because of US jobs are flowing overseas. Competition from Chinese imports is also a factor, but less so.

A paper by economists Michael Elsby, Bart Hobijn and Aysegul Sahin examines why "the share of income going to labor has decreased in the U. S." The paper finds that import competition is most responsible – and China provides most of the imports.

This paper concludes as follows:

The article utilizes this conclusion to propose its own: "There is a growing body of research showing that globalization – and, in particular, the rise of China – has been the biggest factor hollowing out the American middle class."

Never mind that the three studies cited by the article seem to contradict each other in terms of assigning blame. They all mention China, so presumably that constitutes "a growing body of research."

The article examines how China's pernicious influence can be counteracted, then concludes that "reshoring" initiatives are not going to be effective, as they are difficult to negotiate and implement. Trade barriers have a similar problem: Companies will simply look for other low-cost providers abroad.

Eventually we are advised that the "only solution … is to wait." Eventually, China's wages and benefits will catch up to the West's and then it will not be such a formidable wage competitor.

Of course, there is another solution as well, which is the one we prefer: Get rid of Western (domestic) legislative and judicial manipulations that have placed labor in a difficult position in the first place.

Get rid of intellectual property laws and corporate personhood and the work force would benefit inordinately. Entrepreneurialism would rise again as would labor creativity. Do away with monopoly central banking and the horrible centralizing booms and busts would diminish as well.

This entire article, like so many others, is framed within the context of modern labor laws and a monetary and corporate environment that is endlessly and expansively supported by state force.

Let a market emerge free of authoritarian business and monetary structures and "human action" may do the rest. People will be free to create a variety of wealth-enhancing solutions and these will occur no matter the "competition" of robots, union-busting legislation or Chinese competition.

When confronted with business and labor challenges, people often seek new frontiers and innovative work methodologies. What holds them back is a lack of freedom, not marketplace competition and hapless workers willing to work for a pittance.