The neoliberal press — the embodiment of the establishment yet somehow simultaneously the storied #Resistance — had a collective moment of unabashed delirium to start 2021.

For too long, the Orange Menace had desecrated DC “hallowed ground” — as #Resistance mythology goes and as Joe Biden put it in the flaccid inauguration speech that someone wrote for him.

All of the degeneracy of the previous 4 years concluded Jan. 20 with the reclamation of the Great American Experiment by 78-year-old Joe Biden.

Alas, the stars have aligned — if nowhere else than in the eyes of cable television actors – as a president that can be counted on regains control of the levers of power:

“The contrast on display tonight was so stark… Those lights that are just shooting out from the Lincoln Memorial… it’s like, almost extensions of Joe Biden’s arms embracing America.”

The Washington Post/CNN Chalian types had not shown such a level of enthusiasm for their favored politician since Barack Obama put a thrill up MSNBC host Chris Matthews’ leg in 2008:

“ I have to tell you, you know, it’s part of reporting this case, this election, the feeling most people get when they hear Barack Obama’s speech. My, I felt this thrill going up my leg. I mean, I don’t have that too often.”

Utterly stale, meaningless neoliberal oration – when delivered with the proper soaring cadence that fills even vacuous language with the pretense of weight – is catnip to these people. It speaks to the core of who they are – all hat, no cattle. All frills, no substance.

For the average American, regardless of political affiliation, the tea leaves read little positive and much more suffering for the coming four years. Sadly, if the past is a guide, the truly beneficial elements of the left (that want to redistribute power and self-ownership back to the people) will go to sleep.

The Biden administration, in its slavish servitude to the international banking cartel (the true de facto, unelected, permanent ruling force in the liberal world order hierarchy), cannot maintain the appearance of legitimacy for even a week.

While Blue Check Twitter celebrated the “return of democracy” or whatever and Biden embraced America with metaphorical arms, the true return to corporate looting and crumbs for the masses under the auspices of responsible governance was already underway.

As soon as he was sworn in, Biden and his handlers went to work walking back fundamental campaign pledges. First came the stimulus checks that Biden had employed to bribe Georgia voters to elect Raphael Warnock and Jon Ossoff to the Senate.

At a campaign event on January 4th in the home stretch of the Georgia run-off election, Joe Biden dug deep to promise that $2000 stimulus checks would “go out the door” if both members of the DNC duo won their respective runoff races.

Ossoff and Warnock, in fact, won. Team Biden subsequently amended overnight – just like the fictitious pigs of Animal Farm did with their commandments — its commitment from $2,000 payments to $1,400, arguing that Biden had actually meant $1,400 checks would go “out the door” in addition to the $600 that Trump had awarded the public previously.

Would anyone tolerate this from any personal or professional relationship? A promise of payment is made with an explicit dollar amount and date attached, then rescinded under transparently slimy pretext.

Of course, while the rank-and-file left is sure to be disappointed and abused for now and the foreseeable future, it is the populist right that will bear the brunt of the wrath of Joe Biden’s handlers – precisely because it is the insurgent right that poses the greatest threat to the long-term stability of the new ruling coalition.

In classic Shock Doctrine fashion, Biden’s speechwriters scrambled in the wake of the Jan. 6 Capitol riots to rewrite portions of his inaugural speech to emphasize the “rise of political extremism, white supremacy, and domestic terrorism.” Biden promised to “confront and defeat” populist right movements, although he skipped the “how” part in his speech.

If you are on the left, consider an alternative political ground zero: The American system is broken beyond repair. Reform cannot and will never fix what is fundamentally unfixable. Renovations over a rotting foundation are doomed to fail.

Lending moral or financial support to standard managers of the ruling class, if it has any appreciable macro effect at all, undermines every fundamental precept of the left – as do frequent calls for censorship of political opponents.

A re-evaluation of priorities, across the political spectrum, is desperately needed. What the social engineers want more than anything is “change on the outside, continuity on the inside.”

A society embroiled in chaos and conflict is too distracted and burdened to mount a cohesive, effective challenge to power. Economic and social tensions, fanned by the elites themselves through corporate media, trigger anxiety that, in turn, drives voters into the hands of even more authoritarian leaders out of desperation. 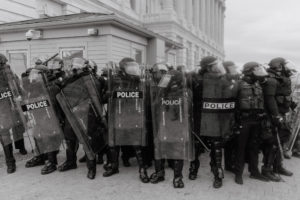 Ideological commitments (purported or genuine) of the ruling class are irrelevant when they are used as a cynical means to justify abuse of a hostage underclass.

The only hope for a brighter future is a populist unity of right and left at the grassroots level. All else is cosplay as a dress rehearsal for true civil war, the most likely result of which being further decline into despotism.

By whatever means necessary, leave the elites and their broken parties behind and de-centralize their power into your community’s hands where it should reside.