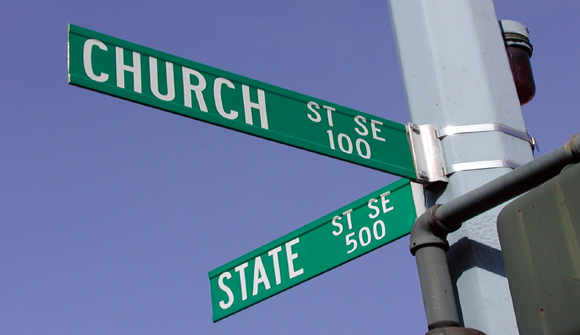 The biggest affront to gay equality in America today is the fact that same-sex couples in 13 states are still prevented from marrying. The laws of Arkansas, Georgia, Louisiana, Kentucky, Michigan, Missouri, Mississippi, Nebraska, North Dakota, South Dakota, Texas, Ohio, and Tennessee are discriminatory, callous in their effects, and may violate the Constitution.

Overturning those laws is the most urgent gay-rights cause. Once they fall, whether through a Supreme Court decision or legislation, the benefits that marriage confers on couples and society will increase. And they will fall. More just marriage laws lay ahead! But they haven't fallen yet. So it is strange to see Indiana, where same-sex couples can and do wed, emerge as the focus of national controversy on gay rights. – Conor Friedersdorf, The Atlantic, April 1, 2015

The argument over same-sex marriage overlooks a key question: Why does the State define who can and can't marry?

Marriage was originally a religious concept in Western culture, during a time when the modern concept of Church and State as separate spheres was fuzzy at best. The Catholic Church would declare a man and woman joined, and it was so. They stayed joined until the Church decreed otherwise (which it would not do for Henry VIII, so he gave us the Church of England).

For centuries, civil authorities had no need to approve or disapprove anyone's marriage. Divorce was rare and women could not own property anyway. In due course, this began to change and governments intervened.

Ministers found themselves acting as agents of both Church and State. By joining two spouses in matrimony, the ministers also bestowed non-religious civil rights on them.

The fact that churches have this privilege, and that the State imposes conditions on who they can legally marry, created the present battle. It doesn't have to be this way.

A simple solution would be for 1) the states to stop recognizing church marriages, and 2) churches to stop bestowing civil rights. Neither should have been doing it in the first place.

People who want a religious marriage could have one within their church, under whatever conditions the church sets. They would NOT thereby be civilly married as well.

To have the contractual rights of marriage, the spouses would need to go to local authorities and register for this status. Non-religious people could skip the church step and go straight to the courthouse. Both kinds of marriages would have the same legal rights and responsibilities.

A third category would be possible, too. People could be married in their church but remain single in the eyes of the State. This would give a new option to those who like to avoid State entanglement in their personal lives.

Religious people would also have to stop resisting the popular demand for same-sex civil marriage. In return, they could set their own standards for marriages within their denomination. Some would allow same-sex marriage and others would not. Everyone would be eligible for the civil benefits marriage provides.

Would this bifurcated system be a fair balance between gay rights and religious freedom?

No one knows because we haven't tried it. We're not even talking about it. We should.