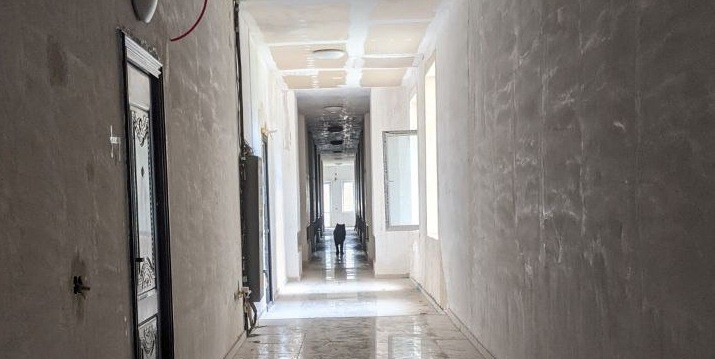 “I don’t know how Tyler found that house but he said he had been there for a year. It looked like it was waiting to be torn down. Most of the windows were boarded up. There was no lock on the front door from when the police or whoever kicked it in. Stairs were ready to collapse. I didn’t know if he owned it or if he was squatting. Neither would have surprised me. What a shithole. Nothing worked. Turning on one light meant another light in the house went out. There were no neighbors. Just some warehouses and a paper mill. That fart smell of steam. That hamster cage smell of wood chips.”
-Fight Club

Supposing anyone back home in the continental US were so inclined to send a care package my way here in the crevices of the Caucasus Mountains, they couldn’t.

They couldn’t because I have no address, and there’s no address because my apartment is located in an abandoned off-grid Soviet-era medical facility. I use “off-grid” in the literal sense; it never made it onto the map, and the local government never bothered to give it a number.

As relayed to my Ukrainian wife by one of the Russian-speaking carpenters renovating stuff here, the rudimentary structure was a project of the Perestroika (“opening up”) period of the 1980s. Under the Perestroika scheme, the Soviet Union attempted to reform itself economically and politically. With the reforms came an infusion of capital for various enterprises.

It turned out, the reformation was too little, too late; the Soviet Union couldn’t right the ship and collapsed; the medical building project was orphaned.

The address-free skeleton is what remains. 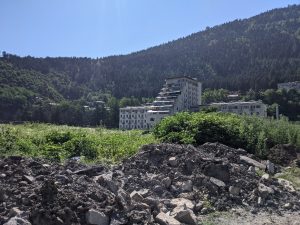 Oddly, I’ve been homed with an address, and been homeless with no address (I tried my hand at urban camping on the outskirts of Durango, Colorado for a spell; long story). Until now, I never experienced the novelty of having a home with no address.

Is that a paradox?

Potential life goal: I might get around at some point to squaring the circle and becoming homeless with an address. Sometimes the temptation to give up beckons me — to take to drinking wine for a living, and move into a cardboard condominium.

In such an instance, I could probably get a PO box somewhere. Mission accomplished.

According to street punk band NOFX, malt liquor tastes much better on the streets.

The wife and I – she perhaps not as enthusiastically as me – are embodying the Fight Club ideal. Specifically, the rejection of comfort of consumerism.

Nails jut out from the hallway walls, threatening to stab anyone not careful enough to avoid them. Suffice it so say, the building wouldn’t meet code in the West. 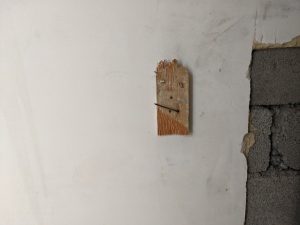 Nearby, some upscale wall-nail-free bourgeois apartments cater to posh tourists who visit to bask in the nearby natural springs, which local legend maintains have medicinal properties.

Those “versatile solutions for modern living” – to quote Tyler Durden — are down the road on the other side of the unused train tracks. They used to vector locomotives to and fro Tbilisi but don’t anymore. Such accommodations are for consumers living the lie, not enlightened rejecters of the lie living Tyler’s dream like me and the reluctant-yet-understanding wife.

Plus, we pay $200 in monthly rent. Yes, it would be cooler for sure if we were bona fide full-on squatting; but $200/month in what feels like a squatter’s paradise is the next best thing.

How possession of our little slice of the building fell into the hands of our landlord – some sweet-sounding lady from Tbilisi – I have no idea.

“In the world I see you are stalking elk through the damp canyon forests around the ruins of Rock feller Center. You’ll wear leather clothes that will last you the rest of your life. You’ll climb the wrist-thick kudzu vines that wrap the Sears Towers. And when you look down, you’ll see tiny figures pounding corn, laying stripes of venison on the empty car pool lane of some abandoned superhighways.”
-Fight Club

The anarchic, nameless Soviet medical building is inhabited by a native, Jackie (his name was also relayed by the carpenter).

Because there is a dearth of light (no such amenities) he sometimes sneaks up on the unsuspecting as he rounds a corner in the nighttime hours. The only clue one has when out of eyesight or earshot of his existence is the copious black fur he sheds all throughout the corridors. All except the most observant will fail to notice him in the shadows until he stirs — always so quietly, and disturbingly. 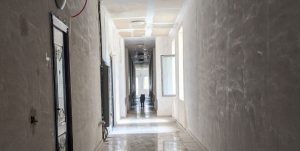 When he detects a visitor to his domain approaching from a hundred yards away across the vast unkempt, weed-infested yard, he obliquely tracks you from the brush, silently – never barking, eyes fixed.

The eyes, from dusk onward, are often the only visible portions of him in the darkness.

By day Jackie wrangles (harasses) the cows that feed in the adjacent field, which belong to some farmer somewhere who comes to collect them at sundown and deliver them for safekeeping until daybreak.

By night he prowls the gravel pathway, howling at the moon and chasing cars that infringe on his territory.

Jackie’s elusive anthropomorphic character has evolved into an area of intense interest for me. He’s wolflike in some respects, yet downtrodden in some intangible way by the pressures of domesticity exerted on his bloodline through eons of genetic evolution from wolf to canine.

The wildness buried deep in his genetic code, which he longs for, is somehow unattainable, even if there are no immediate constraints on his primal impulses. So, although there are no fences or leashes restricting his freedom, his soul is caged in some indefinable, tragic way.

His character, if it were summed up, would be that of a friendly wraith, stuck on Earth and numb to his entrapment, yet comfortable with the terrain he is doomed to occupy. His ways of moving through the world simultaneously unsettle the stomach of, and endear him to, his human co-habitants. Something like a canine Edward Scissorhands.

We’re all freaks here, in the forlorn Soviet Union-era medical building. The jigsaw pieces fit together.

“Sink Into What You Are”
-Duncan Trussell

*If you enjoyed this and so desire to help me out, slide over to the original site and upvote it. I appreciate the support. Just register and vote in the sidebar (screenshot below). 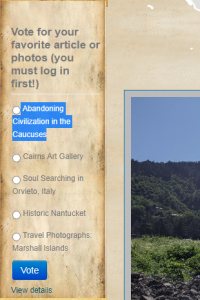