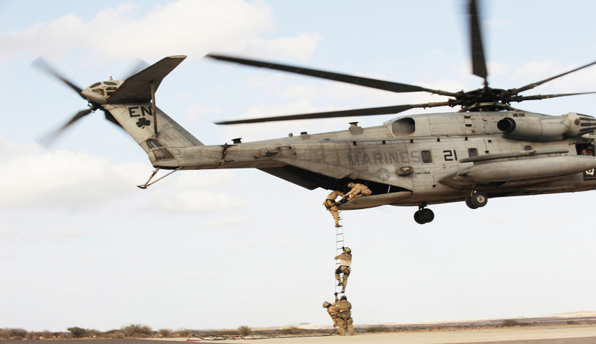 STAFF NEWS & ANALYSIS
Africa Rising: The Military-Industrial Complex Gets to Work
By Staff News & Analysis - May 28, 2014

U.S. Training Elite Antiterror Troops in Four African Nations … United States Special Operations troops are forming elite counterterrorism units in four countries in North and West Africa that American officials say are pivotal in the widening war against Al Qaeda's affiliates and associates on the continent, even as they acknowledge the difficulties of working with weak allies. The secretive program, financed in part with millions of dollars in classified Pentagon spending and carried out by trainers, including members of the Army's Green Berets and Delta Force, was begun last year to instruct and equip hundreds of handpicked commandos in Libya, Niger, Mauritania and Mali. The goal over the next few years is to build homegrown African counterterrorism teams capable of combating fighters like those in Boko Haram, the Islamist extremist group that abducted nearly 300 Nigerian schoolgirls last month. – NY Times

Dominant Social Theme: Africa needs to be tamed. But it is not nation-building. It's anti-terrorism.

Free-Market Analysis: We've often pointed out that there seems to be a globalist plan to swap in Africa for Japan and China when it comes to creating nation-states and regions that can buy US Treasuries.

We have named this meme "Africa Rising," and you can see some of our articles here:

The mechanism of the modern buying binge emerged – from what we can tell – when the Reagan administration struck a deal with Japan in the 1980s that resulted in Japan buying ever more aggressive amounts of US Treasuries.

In turn, US officials arranged for Japanese products, especially cars, to be introduced prominently into US consumerist culture. US citizens then purchased Japanese goods and services at a high rate, thus repatriating some of the cash that the Japanese government had spent on US securities.

The money the US government received from Japan in return for its Treasuries helped the military-industrial complex continue its expansion and further strengthened US hegemony around the world.

When Japan's economy imploded from printing too much money, US officials made the same kind of deal with China, a deal that continues to this day even though the Chinese economy is in danger of the same kind of downward spiral that Japan experienced.

Because the Chinese economy has been undermined by printing so much money, the West's globalist community that organizes these sorts of manipulations has been actively working on ways to create the same sort of consumerist and monetary swapping with Africa.

There is a good deal of propaganda involved with these sorts of dealings. Both China and Japan – at the height of their prosperity – were hailed as examples of countries that had adopted "capitalism" and thus, the wise rulers of these countries had provided their citizens with the wherewithal to become prosperous.

Of course, in reality, the kind of monetary mischief that was imposed on Japan has impoverished that country for nearly 30 years now. Japan, in other words, never recovered from money printing that at one point saw the Emperor's palace and grounds valued more highly than the entirety of California.

China these days is building whole empty cities in a desperate attempt to contain the torrents of money it has printed and sooner or later that country will probably be faced with the same kind of ruinous trends that Japan has encountered.

Now the idea, apparently, is to bring this mechanism to Africa.

The trouble with Africa, however, is twofold. First, Africa is not a single nation. And second, Africans generally are tribally oriented (many of them).

In other words, the culture doesn't necessarily lend itself to the kind of factory operations necessary to produce what the West needs to sustain its consumerist culture and generate cash to repatriate to Africa.

However … the power elite behind these globalist manipulations is well aware of the challenges it faces in turning Africa into the next China. But it is apparently determined to try. Now they are turning to military force to reshape these societies so as to generate the kind of populations necessary to create a "new" and "prosperous" Africa.

"Training indigenous forces to go after threats in their own country is what we need to be doing," said Michael A. Sheehan, who advocated the counterterrorism program last year when he was the senior Pentagon official in charge of Special Operations policy. Mr. Sheehan now holds the distinguished chair at the Combating Terrorism Center at West Point.

As the United States military seeks to extend its counterterrorism reach in Africa, President Obama is expected to appear at West Point on Wednesday to emphasize a foreign policy that would avoid large land wars, like those in Afghanistan and Iraq, and instead stress the training of allied and partner nations to battle militants on their own soil.

Since the attacks on Sept. 11, 2001, the United States has slowly built a multipronged counterterrorism strategy in Africa: It has carried out armed drone strikes in Somalia from its only permanent base on the continent, in Djibouti; backed African proxies and French commandos fighting Islamist extremists in Somalia and Mali; and increasingly trained African troops to combat insurgents.

Under the new Africa plan, the Pentagon is spending nearly $70 million on training, intelligence-gathering equipment and other support to build a counterterrorism battalion in Niger and a similar unit in nearby Mauritania that are in their "formative stages," a senior Defense Department official said.

… In the past decade, the Bush and Obama administrations put a premium on training and equipping foreign troops to combat terrorists and other Islamist extremists and persuaded Congress to approve funding for those programs. The new program to train small counterterrorism forces in Africa resembles larger efforts by American Special Operations troops carried out in Iraq and Afghanistan.

There is some sort of fairly ancient strategy being followed here. Apparently, nation-building includes finding a rationale for injecting troops into a given area with the idea of dominating the local culture and building new traditions that better mesh with invading forces.

Long ago, religion seems to have been a primary justification for nation-building. Now apparently the "war on terror" is the justification for a comprehensive military-industrial realignment in a given region.

There is also a further complicating factor as another series of African wars seeks to oust sectarian leaders in Northern Africa and the Middle East in favor of Islamic-oriented regimes. The idea behind this is apparently to set up an Islamic crescent that can engage in a Hegelian dialectic with the West that will eventually result in a social and industrial synthesis with it.

But the "Africa Rising" gambit is distinctly different, from what we can tell. In this case, the troops are to be used to instruct local leaders about ways they can steer their citizens in directions that the West wants them to go.

The idea will surely be to further regiment tribal societies and to use public education to create a new generation of African people. These individuals may be more amenable to Western style consumerism and the industrial blueprint that must be implemented to produce it. Africans, in other words, are to be re-educated for purposes of factory work.

Will it happen? Our perspective is that all these world-spanning manipulations are gradually grinding to a halt in this Internet Era. It is not so difficult to manipulate people and their cultures in secrecy – so long as you have the vast money power of central banking behind you.

But it is much more difficult when the mechanisms of control are themselves widely disseminated and the actual operations are being exposed within a real-time context.

The Africa Rising trend is one of the most important elite gambits in the world today. But its success is not necessarily assured.