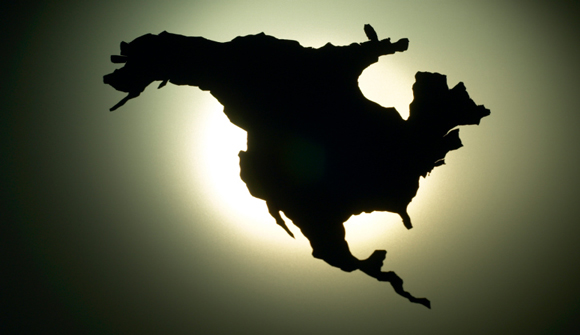 STAFF NEWS & ANALYSIS
America is Too Big, Like Going to a Restaurant with 20 Friends
By Joe Jarvis - November 15, 2017

Have you ever tried to go out to dinner with a party of 20? This is a group of people with presumably the same core value: you all want to have dinner with some friends. So everyone is in agreement on the goal, even if a few guys just go along to make their wives happy.

The decision of where to go out to eat is usually left to just a few people in the group. Some people might voice support for this or that restaurant, and perhaps veto others.

“Have you all tried the new Italian place?”

But somebody ends up taking the bull by the horns. For better or worse one person calls to make the reservation.

Once at the restaurant, you all sit down around a pieced together table awkwardly stuck in the middle of the room. It takes the wait staff about 20 minutes just to wind their way around the table. Other diners in the restaurant form a bottleneck trying to get around the makeshift banquet table to the bathroom.

Officially you have a party of 20 people successfully dining together. But can you talk to all 20 of your friends? Of course not. If you are stuck at the end of the table, you have three people to chat with. Some lucky people in the middle can converse with five different friends. But not a single person can actually enjoy the company of all 20 dinner guests.

Then it’s time to order. Some restaurants give a limited menu to a party of this size. Others might insist you order communal dishes to share. Otherwise, it is unlikely that all the food comes out at once. Do you let yours get cold waiting politely for the next person’s meal to come out?

And finally, with a party that size, the restaurant automatically adds 20% to the bill for gratuity. It doesn’t matter how good or bad the service was. And now you are all left to figure out who owes what. Are you going to go full commie and just split it evenly? Well, Susan just got a salad and no wine, so that’s not fair. Ron doesn’t have any cash, can they run multiple cards? Does anyone have change for a $50?

It is a nightmare. And you don’t have to do it.

The best thing to do is fracture into four or five groups and all go out to dinner separately. In practice, you can still converse with the same number of people, but you get to choose which ones. Other benefits of splitting up include more influence over the restaurant your group chooses. You can order whatever you want. There are no complications with finding enough seating, waiting for other’s food, figuring out how to split the check and so on.

But there was still some drive in the group to all go out together. The group is pretending to be one cohesive unit. Yet based on the noise levels and seating distance, you are limited to interacting with only a few friends. Worse, it is almost random who you will be stuck sitting next to. If you split into smaller groups, you can link up with the other folks you actually want to talk to.

Then you could all coordinate as individuals if you want to meet at a bar afterward. That is more accommodating to floating around and mixing with your 20 friends.

This is the story of America.

Why is America still trying to eat at the same large table in a crowded restaurant when we could be going out with smaller groups of our choosing?

This week a bunch of U.S. Mayors and Governors are meeting in Germany to tell world leaders they are still on board with their climate change agenda. California Governor Jerry Brown and former NYC Mayor Michael Bloomberg were among them.

The group just released a report that said if these non-federal entities were a country, their economy would be the third largest in the world.

If only they were their own countries! Then all the voters and leaders from New York City and California wouldn’t be ordering our meals for us. We wouldn’t be plopped next to these people who we don’t want to talk to. We wouldn’t be forced to split the bill with people who are ordering expensive and unnecessary appetizers. But if they happen to come up with something that works, we can meet them later at the bar and see if it makes sense for us as well.

In DC, Congress is trying to decide whether to force Americans to pay the individual mandate penalty for not having health insurance. This is the forced 20% tip for terrible service. And it is also like having a small salad and no drinks, then having to split the bill with people who order full entrees, appetizers, and wine galore.

I don’t smoke, I exercise, I eat healthily. I’ve never had to go to the hospital in my life. I rarely get sick, and when I do, I treat myself with plenty of tea and spices. Why should I pay thousands of dollars a year for health insurance? I can save that money, and pay out of pocket if anything happens. Even if something catastrophic happens, why not set up a payment plan after the fact, rather than paying for insurance before? The bottom line is it should be my choice. Being grouped with 320 million Americans doesn’t let me order what I want.

And all this is beside the fact that we are stuck in an expensive American healthcare system. That is like not having the choice of what restaurant to eat at. Some employers are now paying for week-long Caribbean vacations for their employees who need knee replacements because it is cheaper than getting the operation done in the U.S.

These are just some examples, but the analogy applies to almost everything. Most problems in America stem from trying to group 320 million people together. But we really can’t associate with everyone anyway, so why are we pretending to be one cohesive unit?

If we all just agreed to go our separate ways at state, or even city levels, we would get along much better. Places could team up for joint programs if they wanted. America could even exist as a voluntary defense organization that states are free to join or not–like meeting at the bar later.

But there wouldn’t be countless squabbles and arguments to overcome. California could do what it wants in regards to climate change, and New York City could implement a full-fledged police state. Texas could decide if they want a border wall, and Colorado banks could accept cash from marijuana sales.

I’m a big believer in individual action. There are plenty of ways to live free by moving to a better jurisdiction, ignoring the laws you can, and creatively and legally reducing your tax and regulatory burdens.

But if you still believe in the political process, focus locally. Get your local and state governments to protect their citizens from federal overreach. Treat your congressman like a lobbyist to protect your region from the feds.

Better yet, join the secession movements in California, Texas, and New Hampshire.

The dinner example may be a little silly, but I think it is a pretty good analogy. Where else do you think it could apply?