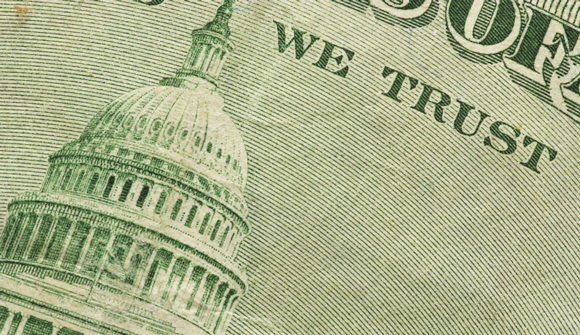 The Citadel Is Breached: Congress Taps the Federal Reserve for Infrastructure Funding … The highway measure would be financed in part by a one-time use of Federal Reserve surplus funds and by a reduction in the 6 percent dividend that national banks receive from the Fed. . . . Banks with $10 billion or less in assets would be exempt from the cut. The Fed's surplus capital comes from the 12 reserve banks. The highway bill would allow for a one-time draw of $19 billion from the surplus, which totaled $29.3 billion as of Nov. 25. – Web of Debt/Truthdig

Dominant Social Theme: It's about time that the Congress took over from the Fed and began printing money and paying for things without central bank mediation.

Free-Market Analysis: Our old friend Ellen Brown has just released a triumphant article, excerpted above, that celebrates Congress's decision to extract funds directly from the Federal Reserve and its member banks.

Readers familiar with The Daily Bell will know that we have tracked this meme for years – and participated in arguments about it – fearing that backers of the increasingly beleaguered Federal Reserve would create a direct payment stream to the American people as a way of regaining popularity.

More precisely, what we expected might happen is that Fed backers would start a campaign to transfer central bank power directly to the US legislature and executive branch. This would be done under the guise of reducing Fed power. But in reality, once the transfer was accomplished, the same power brokers would regain control by subterfuge.

Brown writes, "The Citadel Has Been Reached." What she means is that this process is now underway, though putatively it is being driven by fiscal necessity rather than manufactured by artificial public sentiment.

… Less publicized was where Congress would get the money: largely from the Federal Reserve and Wall Street megabanks. Banks vigorously fought the dividend cut, which was estimated to generate about $17 billion over 10 years for the highway trust fund.

… The deal was summarized in a December 1st Bloomberg article titled "Highway Bill Compromise Would Take Money from US Banks."

In her article, Brown provides a brief historical overview of this increasingly epochal battle. "For over a century, populists and money reformers have petitioned Congress to solve its funding problems by exercising the sovereign power of government to issue money directly, through either the Federal Reserve or the Treasury," she explains.

She then rehearses the US history of direct government printing, reminding us that beginning in the 1860s, "Abraham Lincoln issued debt-free US Notes or 'greenbacks' to finance much of the Civil War, as well as the transcontinental railroad and the land-grant college system."

From her point of view – and she has worked tirelessly to regularize the debasement of money as a legislative function – momentum is slowly beginning to favor her cause.

She notes that way back in 1999, Illinois Rep. Ray LaHood introduced the State and Local Government Economic Empowerment Act (H. R. 1452), "which would have authorized the US Treasury to issue interest-free loans of US Notes to state and local governments for infrastructure investment."

In this latest article, she informs us that, "Law professor Timothy Canova plans to reintroduce this funding model if elected to represent Florida's 23rd Congressional district, where he is now running against the controversial Debbie Wasserman Schultz, current chair of the Democratic National Convention."

Interestingly, she quotes from an article that Prof. Canova wrote in December 2012 rebutting those critical of the idea that Congress should print money directly for federal government funding.

Here, from his article, as quoted:

Wall Street bankers and mainstream economists will argue that greenbacks and other such proposals would be inflationary, depreciate the dollar, tank the bond market, and bring an end to Western civilization.

Yet, we've seen four years of the Federal Reserve—now on its third quantitative-easing program—experimenting with its own type of greenback program, creating new money out of thin air in the form of credits in Federal Reserve Notes to purchase trillions of dollars of bonds from big banks and hedge funds.

While the value of the dollar has not collapsed and the bond market remains strong, neither have those newly created trillions trickled down to Main Street and the struggling middle classes. The most significant effect of the Fed's programs has been to prop up banks, bond prices, and the stock market, with hardly any benefit to Main Street.

Let's provide a larger frame of reference to clarify why such statements make us crazy. Prof. Canova believes that because the HUNDREDS OF TRILLIONS printed by central banks around the world over these past five years have not yet ruined the global economy, it is absurd to think that such ruination is possible.

If one is alive, in other words, one ought to conclude that death is not feasible. In fact, the world's economy is in such desperate shape that securities marts have shed trillions in value in 2016 alone.

Like Prof. Canova, Brown simply refuses to give credence to the idea of monetary inflation. Both of these individuals do not believe that granting Congress the explicit ability to print money sets a dangerous precedent. Neither one is worried that Congress – an institution trusted by less than 10 percent of US citizens – might abuse the vast power of monetary creation just as the Fed itself has.

Setting the price and volume of money by artificial means – by fiat – is a price fixing exercise. Price fixing distorts economies and falsifies demand. Over time price fixing destroys capital and ruins nations.

These are lessons that history teaches us. As the famous economist Murray Rothbard pointed out, money is what people decide to accept in a given region. And this is a holistic and competitive process. The marketplace determines what money is, not the State.

But Brown and many others including the British Fabians are determined to redefine history. For reasons known only to themselves, these individuals want us to believe that the state can do a better job of managing money than the Invisible Hand.

Why do they argue for state control of money when the evidence of nation-state incompetence is strewn all around us? This is something only the opponents of free markets can answer. We certainly can't.

We can only observe that if direct legislative control of money becomes a significant Western trend, the current economic environment will become even more dire.

Please pay attention. Protect yourself and your loved ones as you can because you must. And buy some gold. And silver, too.