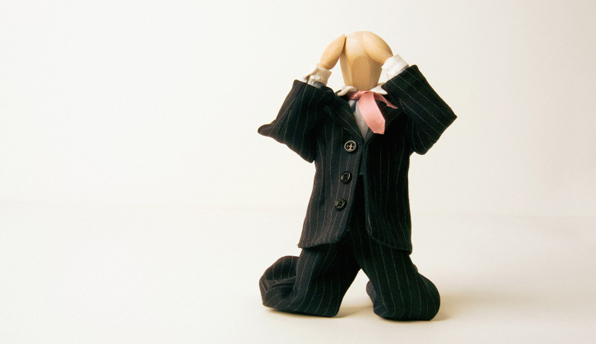 STAFF NEWS & ANALYSIS
Are You a Failure? Blame Yourself for the Woes of the World
By Staff News & Analysis - April 03, 2014

More Americans see middle class status slipping … A sense of belonging to the middle class is occupies a cherished place in America. It conjures images of self-sufficient people with stable jobs and pleasant homes working toward prosperity. Yet nearly five years after the Great Recession ended, more people are coming to the painful realization that they're no longer part of it. They are former professionals now stocking shelves at grocery stores, retirees struggling with rising costs and people working part-time jobs but desperate for full-time pay. Such setbacks have emerged in economic statistics for several years. Now they're affecting how Americans think of themselves. – AP

Free-Market Analysis: The point of this analysis from AP is to put the demise of civil society into a perspective that the average person can understand and accept.

Under no circumstances is the average person to understand that the "demise of the middle class" has been preordained by the policies and economic system put into place after World War II.

As Western economies collapse, this will become increasingly important. You must believe the current economic catastrophe is simply the way of the world, or you must believe it is YOUR fault. Either belief is okay.

Since 2008, the number of people who call themselves middle class has fallen by nearly a fifth, according to a survey in January by the Pew Research Center, from 53 percent to 44 percent. Forty percent now identify as either lower-middle or lower class compared with just 25 percent in February 2008. According to Gallup, the percentage of Americans who say they're middle or upper-middle class fell 8 points between 2008 and 2012, to 55 percent.

… The trend reflects a widening gap between the richest Americans and everyone else, one that's emerged gradually over decades and accelerated with the Great Recession. The difference between the income earned by the wealthiest 5 percent of Americans and by a median-income household has risen 24 percent in 30 years, according to the Census Bureau.

Whether or not people see themselves as middle class, there's no agreed-upon definition of the term. In part, it's a state of mind. Incomes or lifestyles that feel middle class in Kansas can feel far different in Connecticut. People with substantial incomes often identify as middle class if they live in urban centers with costly food, housing and transportation.

In any case, individuals and families who feel they've slipped from the middle class are likely to spend and borrow less. Such a pullback, in turn, squeezes the economy, which is fueled mainly by consumer spending.

"How they think is reflected in how they act," said Richard Morin, a senior editor at the Pew Research Center.

… Rob McGahen, 30, hasn't yet found a job that paid as well as the purchasing agent position at Boeing's defense division that he left in 2011. Nervous about the sustainability of that job because of government defense cuts, McGahen quit after buying a bar near his St. Louis home.

… "I have really beat myself up a lot over the last 2½ years," McGahen said. "Until I get myself up and going again and in a good place … it is tough."

This article makes a quite important statement. The last line is telling. The whole process of this exercise is to ensure that people who are "falling out of the middle class" feel it's THEIR fault.

McGahen "beats himself up." His inability to think clearly about his plight is an encouraging sign from the standpoint of those who have organized his economic plight.

In truth, the world McGahen believes in no longer exists, and really NEVER existed. What supported "American exceptionalism" in the 20th century was the petrodollar. This allowed United States policy makers to live beyond their means. They could borrow and spend literally as much as they wanted to on Great Society programs and military-industrial programs because Middle Eastern countries (under duress) had agreed to accept only dollars for oil.

Probably not one Baby Boomer in a million (to quote Keynes) had any idea that his lifestyle was being subsidized by some very specific currency agreements. Most Baby Boomers thought – if they thought about it at all – that the US was the beneficiary of a special system that made the country "great."

Maybe it was simply the American way.

Only it wasn't. It was a currency deal that made America and gave Americans their "Affluent Society" – as economic commentator John Kenneth Galbraith called it.

Galbraith, like many of his colleagues, was dishonest. He must surely have known what was propping the US up, but he chose instead to rail against American prosperity. Like so many others, he played his part and helped sustain Dreamtime.

But Dreamtime has come crashing down. The elites are moving to destabilize the dollar around the world. They are using war and debt destabilization to do so. And they are likely using fracking as well.

Suddenly the world is awash with oil. People don't have to hold dollars. They can drill for oil themselves, or buy it from the Russians or elsewhere. The Saudis know this, by the way. Like so many other useful pawns of the Anglosphere they are being cast aside. The day of the petrodollar is over along with the kingdom of Saud. Or so we believe, if we are reading the tea leaves correctly.

The next stop is some sort of globalized currency along with a global central bank and other manifestations of international commerce. But in order to get there from here, many economies will have to crumble and the US in particular is going to suffer mightily.

The trick will be to manage the madness of the masses as they realize gradually that things have changed for good. The way this is done is through gradual monetary inflation that chips away at prosperity until there is nothing left of it.

The stock market will boom for a while, of course – and this is why we continue to mention the ongoing Wall Street Party. In fact, in the near future there will be asset bubbles of all kinds.

The fading US middle class – and Western middle classes in general – are not supposed to understand what's going on. They are supposed to continue to worry about how to pay for increasingly useless university educations.

In the US, they are supposed to worry about how their parents are going to afford expensive old age homes, and how they themselves can afford to retire at 65 (absent a government pension). It will never occur to them that the extended-family model is among the most efficient and humane kinds of family structures.

It will never occur to them that an agrarian lifestyle may be preferable to a poverty-stricken post-industrial one.

Dreamtime was a myth sold to people to keep them content while the power elite organized a more global environment elsewhere. Well, now the dream has run its course. People are finally waking up.

The elites' challenge is to ensure by a variety of methods that people keep blaming themselves – or perhaps Wall Street or "crooked politicians" – for the serial disasters overtaking their lives.

Under no circumstances are they to conclude that, among other things, monopoly central banking and corporate personhood are responsible for many of their woes, and that the system they yearn to conform to has been cold-bloodedly set up to undermine their wealth, happiness and security.

We expect more of these articles as time goes on, profiling miserable people who can't figure out what's gone wrong. These articles will clinically evaluate the evisceration of the middle class without ever shedding any light on true causations.

This is an emergent dominant social theme and a powerful one. People should not ever see, hear or smell the truth.

Never. Let them blame themselves.