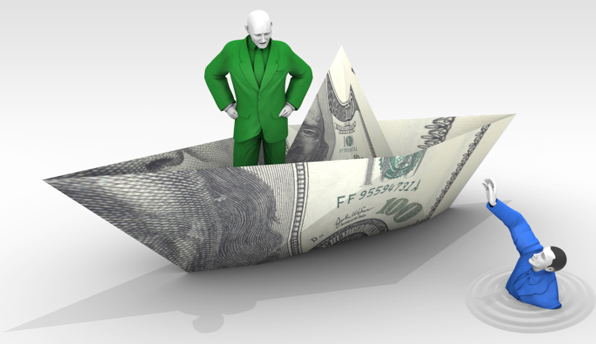 A New Report Argues Inequality Is Causing Slower Growth. Here's Why It Matters … Is income inequality holding back the United States economy? A new report argues that it is, that an unequal distribution in incomes is making it harder for the nation to recover from the recession and achieve the kind of growth that was commonplace in decades past. The report is interesting not because it offers some novel analytical approach or crunches previously unknown data. Rather, it has to do with who produced it, which says a lot about how the discussion over inequality is evolving. Economists at Standard & Poor's Ratings Services are the authors of the straightforwardly titled "How Increasing Inequality is Dampening U.S. Economic Growth, and Possible Ways to Change the Tide." – New York Times

Free-Market Analysis: We weren't going to write another article on the income inequality meme, but it's like a train wreck – we can't look away. Here's ANOTHER article on "income inequality" – and it's not even a standalone item but one that deals with an exhaustive S&P research report on the subject.

Heck, what would the New York Times have to write about if it hadn't discovered income inequality? Here's a link to an article of ours on this subject that appeared yesterday:

And here are some other articles on the subject:

Here's more from the Times article:

The fact that S.&P., an apolitical organization that aims to produce reliable research for bond investors and others, is raising alarms about the risks that emerge from income inequality is a small but important sign of how a debate that has been largely confined to the academic world and left-of-center political circles is becoming more mainstream.

"Our review of the data, as well as a wealth of research on this matter, leads us to conclude that the current level of income inequality in the U.S. is dampening G.D.P. growth," the S.&P. researchers write, "at a time when the world's biggest economy is struggling to recover from the Great Recession and the government is in need of funds to support an aging population."

… In that sense, the new S.&P. report is a sign of how worries that income inequality is a factor behind subpar economic growth over the last five years (and really the last 15 years) is going from an idiosyncratic argument made mainly by left-of center economists to something that even the tribe of business forecasters needs to wrestle with.

… Because the affluent tend to save more of what they earn rather than spend it, as more and more of the nation's income goes to people at the top income brackets, there isn't enough demand for goods and services to maintain strong growth, and attempts to bridge that gap with debt feed a boom-bust cycle of crises, the report argues.

High inequality can feed on itself, as the wealthy use their resources to influence the political system toward policies that help maintain that advantage, like low tax rates on high incomes and low estate taxes, and underinvestment in education and infrastructure. Those ideas go back to John Maynard Keynes, and this year alone major books from academic economists have explored them (Atif Mian and Amir Sufi's "House of Debt," and the aforementioned Thomas Piketty's "Capital in the Twenty-First Century").

The report itself does not break any major new analytical or empirical ground. It spends many pages summarizing the findings of various academic and government economists who have studied inequality and its discontents, and stops short of recommending any radical policy changes favored by the likes of Mr. Piketty (who is among those cited).

… The S.&P. report is one document from one research group, so one shouldn't make too much of it. But it is a sign of where things are shifting: Anyone who wants to explain why the United States economy is evolving the way it is needs to at least wrestle with the implications of a more unequal society for the economy as a whole.

Wow. Look at this quote: "High inequality can feed on itself, as the wealthy use their resources to influence the political system toward policies that help maintain that advantage, like low tax rates on high incomes and low estate taxes, and underinvestment in education and infrastructure."

Is this actually a serious point? In context, it assumes that low tax rates and low estate taxes are negative. It then compounds the problem by making the argument that public education needs more public spending – this from a newspaper residing in a city where something like only 50 percent of students graduate from high school, while many of the rest drop out without even learning to read. Way to reinforce those memes, New York Times!

There's a bigger problem with this article, however, and it goes back to something we wrote yesterday. Here's the quote:

We seem to be treading on dangerous ground now: When it comes to this "economic inequality meme," frustrated internationalists may have decided to dispense with populist approbation in order to simply make a case for leveraging government force without the appropriate "buy-in." This is surely a recipe for tremendous social discord, aimed not at the victims that elites want targeted but at elites themselves, or at least the mechanisms of elite control. … Perhaps this is indeed the current plan … to generate as much anger and chaos as possible in order to justify authoritarian regimes that can mandate increased globalist policies.

Now, we don't claim to have any "special" powers, but this is truly remarkable. The same day we caution that the income inequality meme is moving so fast it appears that elites have decided to "leverage government force without the appropriate buy-in" comes an article claiming that the US's economic "slough of despond" is indeed due to this inequality.

Is this then really the new strategy? OWS failed to build a popular groundswell of support for guillotining the "wealthy one percent" but now it appears the idea will be to write ever more alarmist articles that will place the blame for economic non-performance directly on the covetousness of greedy millionaires.

And the real agenda? Well … enough of these articles, and politicians could be persuaded to act – even without a wave of populism. And, yes, aggressive redistribution can generate its own populist dynamic after the fact.

One way or another, the small clique of impossibly wealthy globalists that apparently controls monopoly central banking and multinationals alike are determined are determined to blame errant millionaires for economic dysfunction.

Eventually, all these memes including the one we've covered about a "guaranteed income" shall likely be aggregated into one single dominant social theme, sooner or later, that will seek to absolve the command-and-control mechanisms of the power elite by redirecting the blame.

See here for more on the "guaranteed income":

This will be terrible for what's left of private enterprise, but it will be great for the Times, which can keep writing these articles for years to come (or until it goes out of business).