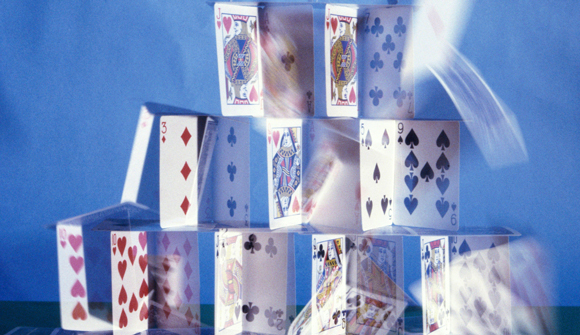 Global elites must heed the warning of populist rage … Real income stagnation over a longer period than any since the war is a fundamental political fact. –Financial Times

This article acknowledges that globalism is failing but then concludes if it does that Western civilization will end as well.

We entirely disagree with this argument, but we see why it is being made.

In fact, we predicted it last month.

The FT article, of course, provides a number of ways that globalism can be strengthened so that civilization as we know it will not end.

Here at DB, we hope fervently that the globalist-engineered system of international authoritarianism does topple over – and quickly. It’s a horrible system designed to fail.

Post Brexit, the development of freedom is to be demonized as “populism.” Globalism was to be advanced as the sensible solution of mature adults.

This article is a perfect example of the new elitist meme.

If governing elites continue to fail to offer convincing cures, they might soon be swept away and, with them, the effort to marry democratic self-government with an open and co-operative world order.

The article then describes why populism is gaining attractiveness, explaining that economic stagnation was causing “rage.”

This is a simplistic analysis of what’s taking place. But it serves the cause of globalism well because it implies that simple greed is behind Western discontent.

If people simply had more “things,” they would be happier.

There is no suggestion that the Internet itself has educated people about the root causes of what they continually lack.

We would argue that additional information has had a powerful impact on what people understand and what they intend to tolerate.

You won’t find this discussed in article, though.

The article bases its discussion on a McKinsey Global Institute report entitled, Poorer than their Parents?

The article maintains this is the root cause of “rage” against the system.

For many of those in the middle of the income distribution, cultural changes also appear threatening. So, too, does immigration — globalisation made flesh. Citizenship of their nations is the most valuable asset owned by most people in wealthy countries. They will resent sharing this with outsiders. Britain’s vote to leave the EU was a warning.  So what is to be done?

Now the article advances a litany of solutions.

The first one is that sovereignty must be balanced by global cooperation. For instance, “climate change is a higher priority than further opening of world trade or capital flows.”

Capitalism itself must be reformed and finance deemphasized. A stable financial system is necessary but it must be stripped of “perverse incentives.”

International cooperation must be brought to bear to help governments with large domestic objectives.

Taxation is an important example. The wealthy need to be fairly taxed.

Investment and innovation must be expanded and modest steps can be made in this regard.  Higher minimum wages and working-class tax credits are two ways to raise income.

Above all, recognise the challenge. Prolonged stagnation, cultural upheavals and policy failures are combining to shake the balance between democratic legitimacy and global order. The candidacy of Mr Trump is a result.

You see what the article has done? It’s explained that populism is the result of popular “rage” and then provided a series of supposedly wise solutions that can remove rage.

It is really important that globalism be redefined and revitalized so that populists like Donald Trump don’t take over.

How important? “Failure must not be accepted. Our civilization itself is at stake.”

That’s a hefty statement of course, and the solutions provided by the article don’t in our view, go very far toward rescuing either globalism or civilization.

Global warming is basically a hoax as we see it, so how spending billions on nonsensical solutions to a non-problem will enrich people’s lives and wallets is questionable indeed.

It is no wonder these “solutions” are so weak. They are not intended to be helpful.

Step back and the larger view becomes apparent: Globalism is to be implemented via chaos. Nothing is supposed to work. though all of it will be tried.

Only when the misery, warfare and economic chaos have been expanded until people cannot bear it, will a meaningful (and terrible) solution be advanced.

This powerful solution will be entirely international in its parameters.

This is how full-blown internationalism is to be created.

In the meantime, the rhetorical dialectic will continue. Populism will be demonized and globalism will advance wise solutions.

Conclusion: This is merely interim propaganda. The desired state of affairs is “order from chaos.” That hasn’t occurred yet as the pain is not nearly developed enough. But it will.