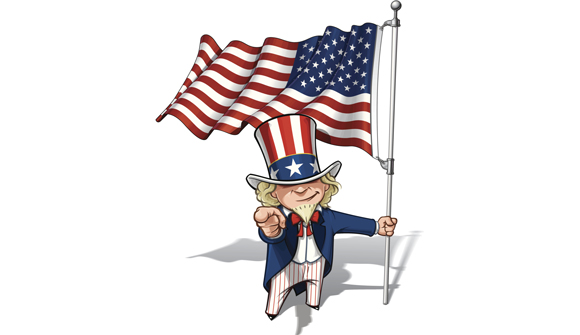 I know a better way to fight ISIS. It starts with an idea that should appeal the better angels of both hawks and doves: National service for all 18- to 28-year-olds.

Require virtually every young American—the civic-minded millennial generation—to complete a year of service through programs such as Teach for America, AmeriCorps, the Peace Corps, or the U.S. military, and two things will happen:

1. Virtually every American family will become intimately invested in the nation's biggest challenges, including poverty, education, income inequality, and America's place in a world afire.

Ron Fournier of National Journal knows "a better way to fight ISIS." Obviously, Pentagon planners should have consulted him months ago. He has just the ticket to solve their vexing challenge.

What is this solution? Give more people "skin in a very dangerous game."

Fighting ISIS certainly is a dangerous game. Do you know who won't have more skin in it under Ron Fournier's plan? Ron Fournier. As is customary in the Baby Boomer generation, he proposed this idea only after he was safely out of the vulnerable age range.

A brief aside: your humble correspondent was in military service, stateside, before and during the 1990-91 first Gulf War. Even in the late 1980s, wearing the uniform in certain places still brought ugly stares and Vietnam baby-killer comments.

That changed almost overnight in August 1990. Suddenly yellow ribbons were everywhere and people were buying us drinks.

What was different? Among other things, the youngest Boomers were in their 30s and safe from any potential service obligations. Civilian thirty-somethings were the group that thanked us for our service most profusely, too.

Back on the subject at hand, Fournier's idea is statist nonsense. Free citizens do not owe the government a year of their lives for military service or anything else.

Were the United States to face a truly serious, existential threat, both young and old Americans would volunteer in adequate numbers. ISIS, while certainly evil, is not such a threat.

Even if ISIS were an existential threat, mandatory service would still make no sense. Having the majority try to preserve its freedom by compelling a sub-group to sacrifice itself accomplishes nothing. A war the nation can't win with volunteers is a war it should not fight.

Of course, what Fournier proposes isn't exactly conscription. He knows a "draft" is a non-starter. He instead offers a plan in which privileged Millennials can be teachers and aid workers, while the uneducated serve as cannon fodder.

He then sets up the Mother of All False Dichotomies:

If we don't deal with ISIS by sending the Millennials into battle, we will have to accept "the slave-holding, woman-raping, Christian- and Jew-killing territory known as the Islamic State, which will not pause to relish victory but instead set sights on Europe and the United States.

Well, when you put it that way… you mainly prove your own disconnection from reality, Mr. Fournier.

ISIS is not coming to the United States. They don't need to come here because if Fournier gets his way, the United States will have gone there. Thousands will die there, too, just as thousands already died elsewhere in the region.

All national service would accomplish is to keep the U.S. mired in wars it should avoid and pad the Daddy Warbucks profit margin. In fact, that may be the real idea. United Technologies, a top defense contractor, had a very large ad on the National Journal home page when I wrote this article.

What a strange coincidence.