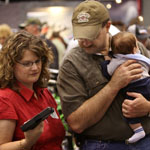 STAFF NEWS & ANALYSIS
Barack Obama Will Back a Federal Europe
By - March 23, 2009

Barack Obama heads to Britain and Europe in two weeks' time as the leader of the first U.S. Administration to wholeheartedly back the creation of a federal Europe. In contrast to earlier U.S. administrations, including those of George W. Bush and Bill Clinton, the Obama administration is avowedly Euro-federalist in outlook, and is keen to help build a European Union defense identity as well as support the foundations of a European superstate in Brussels. This dangerous shift in U.S. policy is a betrayal of both U.S. and British interests that will threaten the long-term future of the Anglo-American Special Relationship, weaken the NATO alliance, and undermine the defense of British sovereignty in Europe. It will also undercut opposition across the EU to the Treaty of Lisbon, including in countries such as Ireland, Poland and the Czech Republic, and may set the scene for a major confrontation between the Obama White House and a future Conservative administration in London. … The Bush Administration was sharply divided over Europe, with then Secretary of State Condoleezza Rice backing the European Constitution, but her pro-Brussels instincts were strongly opposed by key figures in the White House and the Pentagon. Bush himself was no supporter of a Franco-German dominated Europe, and worked hard to build up a counterweight of pro-American nations among the new EU members from eastern and central Europe. – UK Telegraph

Dominant Social Theme: And so the world grows closer.

Free-Market Analysis: And indeed it does. Here is the feedback loop: Central banks inflate bit by bit over decades and eventually cause a dramatic monetary collapse … and suddenly, somehow, the world needs more regulation, more governmental togetherness, more private enterprise transparency, etc. Almost every single suggestion being made currently by Western leadership involves more government intrusion into the private sector. The European Union has been especially big on this – and now America draws closer to the EU to provide more of the same.

Yet perhaps America should rethink. The EU is not exactly in good odor amongst its own citizenry. The attempts of leadership to create a Constitution and to expand what was once a trade treaty into a supra-European empire have been defeated several times. In the meantime, Brussels itself – the supposed model of tribal nation states living together – has begun a seemingly slow motion collapse. The irony of an impotent principality running an unwanted empire-in-the-making has obviously escaped the Obama administration, which wants to bond with this wretchedness. It should at least take a second look.

Here is some insightful commentary (not of recent vintage but relevant just the same) from a reporter affiliated with the website, inplainsite.org:

The present format of the EU cannot last, and it was never intended that it should. Right from the beginning, the founders had grand, globalist ambitions. Addressing the European Policy Centre in September, 2000, Belgian Prime Minister Guy Verhofstadt described the subterfuge adopted to set up the embryonic EU. "With the European Coal and Steel Community, the seeds were sown of the European Union of today. It was the initial impetus to the development of a community approach, step by step forging European integration by joining, and sometimes also by abolishing, national sovereignty into a joint approach." Turning to the next great leap forward, Verhofstadt said: "It is of the utmost importance to keep in mind a global vision of the ultimate goal of European unification." This is a good thing, he explained, because "the European Union as it is now could never be the ultimate goal." He said the pace of integration must never slacken lest, "in the worst case, countries will start to plead for the restoration of their former sovereignty." Notice that national sovereignty – independence – is referred to in the past tense.

Next came the real bombshell. The Belgian said that there must be values underpinning this vast undertaking – the largest coming together of countries in the history of the world. But whose values? His answer: "the values which resulted from the French Revolution" … The French Reign of Terror claimed over a million victims. Inmates of prisons were slaughtered. Human heads were counted up like scores on cards. The terror was justified in the name of "democracy." Similarly the coming clampdown on free speech, religious freedom and free political parties by the "beast of Brussels" system is being justified by words like "anti-discrimination" and a "charter of rights."

What is emerging in Europe is a new Holy European Empire, an attempt to resurrect the old Holy Roman Empire that existed under the Pope. This is becoming increasingly blatant. The Vatican is playing a major role in the creation of the new European Empire, and Catholic social values – so-called "Christian Socialism" – are at its heart. … When I visited Strasbourg, the French city near the German border which, with Brussels, co-hosts the European Parliament, I was introduced to the head of the house of Habsburg, Otto von Habsburg, a man whose family dominated Europe for centuries. Full of charm and intelligence, he said that instead of war, a great new Europe could be built on peaceful cooperation. His ideas go far beyond this, however. In his book, The Social Order of Tomorrow, he writes:

"Now we do possess a European symbol which belongs to all nations equally. This is the crown of the Holy Roman Empire, which embodies the tradition of Charlemagne, the ruler of a united occident . . . the Crown represents not merely the sovereignty of the monarch, but also the ties between authority and the people. True, it is the monarch who is crowned, but in this sacred act he appears as the representative of the whole people. It should therefore be considered whether the European head of state, as the protector of European law and justice, should not also become the guardian of a symbol which, more than any other, represents the sovereignty of the European community." … Dr. Habsburg wants to see Europe have an elected head of state – a man elected for life. This influence of both Charlemagne and the Habsburgs hangs heavily over the new federal Europe.

The European Union's flag consists of 12 stars, inspired by the halo of 12 stars that appear around the Madonna in Catholic pictures of her. A former secretary general of the Council of Europe, Leon Marchal, affirmed that the stars are those of "the woman of the Apocalypse." Enthusiastically he explained, "It's wonderful that we have gotten back to the Introit of the new Mass of the Assumption. It's the corona stellarum duodecim (the crown of the twelve stars) of the woman of the Apocalypse." This is a reference to the woman in Revelation 12 who appears with a crown of 12 stars. Although this woman represents Israel, the Catholic Church has always claimed that she represents the virgin Mary, "the mother of God." … I quote from a leaflet, "Building Europe Together," which I was given on a visit to EU headquarters in Brussels: "The European flag (is) a shared flag, blue with 12 gold stars symbolizing completeness. The number will remain 12 no matter how many countries there are in the European Union."

It is all too-clever by half. Like any other large bureaucratic entity, those at the very top – and behind – the EU have viewpoints that run far beyond what is normally known. Much of what goes on at the top of the EU is clouded in the mist of old-fashioned royal prerogative. Wealthy and secretive families of ancient and careful pedigree cluster there, hidden in the clouds. It is not clear what the EU is supposed to be, but those behind it likely have a vision that is far more radical than those of the EU citizenry. It is this entity that the Obama administration wants to grow closer to and support.

The American and EU perspectives could not be farther apart. The American experiment was conceived as one in which each individual was sovereign and the state was the subservient entity. The EU is conceived of in exactly the opposite way. It was put together by an elite that intended to gradually expand its powers – and it was all to be done in a secretive way so that the average EU citizen would not fully understand what was happening until the super-state was fairly well established. The EU citizen, thus tricked, would be obviously subservient to the state, and would have no choice about it. In both America and Europe, the citizen's relationship to the state may vary from proscribed roles, but culture is difficult to rupture. The EU cultural tradition is not friendly to the individual. In America, the individual was empowered constitutionally. This is a big difference and it makes a close relationship between the EU and America a questionable one.