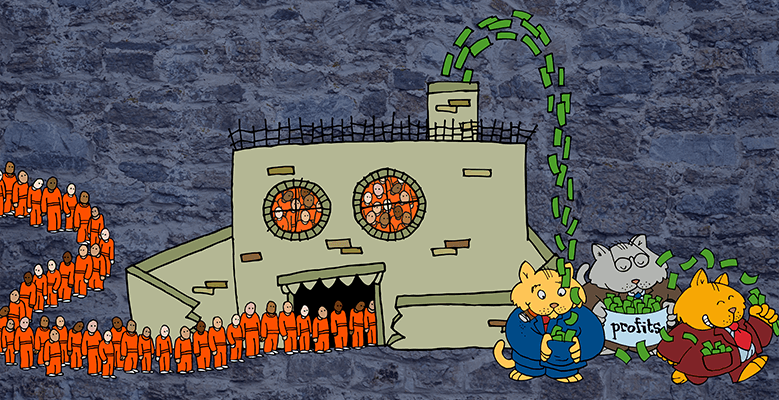 Did you know that in addition to ice cream, Ben and Jerry’s serves up delicious propaganda? Nom, Nom, Nom. Mmmm. I feel informed.

And it is actually pretty good propaganda, in that it contains little chocolaty chunks of truth. You have got to mix some gooey truth morsels in if you want your cold creamy lies to sell.

I was actually pretty surprised to be reading news on Ben and Jerry’s ice cream website. That took me by surprise. And, okay, let me give Ben And Jerry’s a little credit for tackling some issues that need to be brought to light. But they are just such insufferable lefties that even when they bring up a good point, it melts away while they try to sell their progressive vision of the world.

The issue is private prisons. I hate the term. Nothing which derives its entire budget from the government should be considered private. If it wouldn’t exist in its current form without government money, it is not private. And I realize that so many companies now receive government assistance in one form or another that hardly anything is a purely private company anymore. But when the entire budget of the company comes from government contracts, that is most certainly not a private company in any sense of the word.

The article is called Abe Lincoln Would’ve Hated Private Prisons. It brings up some problematic things about the criminal justice system, like the growing number of inmates, and the incentives that “private” prisons have to keep the prison populations growing. In fact, these quasi-private prisons have a large lobbying arm that fights to keep more activities criminalized with a generous topping of stiff sentencing.

When criticizing private prisons, Ben and Jerry’s is basically suggesting that public prisons do not have the same incentives. But they do. Every bureaucratic agency has an incentive to use its entire budget, and request more money. If the director of an agency has more money, he can hire more people, and exert more political control. The more inmates, the more that branch of government is “needed.”

But still, it is right to point out that many prisoners are essentially modern day slaves if they are being forced to work for the profit of others. This wouldn’t necessarily be unjust to force criminals who victimized others to work to pay off their debt to the victim. But the victims are generally not the ones being paid back. Instead, the government and the “private” prisons are keeping the cash.

But Ben and Jerry’s never mentioned the fact that the main injustice is when these modern day slaves are in prison for victimless crimes. And while they lament the private prison industry keeping the profits, they offer no criticism for when the government rather than the victims get the profits of prison labor.

Ben and Jerry’s has a different point to make. They heap on generous servings of racism like they are pouring jimmies–uh sprinkles–all over your delicious propaganda sundae.

In short, mass incarceration has replaced slavery as a form of social control of America’s black population, who are still being used to fill the coffers of the for-profit prison system.

And that was all they said about it. No discussion of why or how this is the case, just some stats to indicate the prison system is racist.

Why don’t they add that victimless drug crimes account for much of the black prison population? It is framed as innocent black people being railroaded into the prison system on trumped up charges. But the charges aren’t trumped up, they are just for victimless crimes such as drugs and public disorder.

Whatever racism exists within the justice system is mostly in what types of behaviors are criminalized, and the standard sentencing for various crimes. Eliminating victimless crimes would go a long way towards fixing the racist nature of the system.

Ben and Jerry’s is totally pouring fudge all over their banana-republic split.

How Private Prison Should Look

If prisons were entirely divorced from government, we would have a system where the only reason someone goes to prison is to pay off a debt owed to their victim. That means the only crimes for which someone could be imprisoned would require a victim. No more victimless crimes. That eliminates as many as 86% of federal inmates!

So without “society” being the victim, we will have (1) the victim (or representative) claiming damages, (2) the defendant, (3) the court (which could be private), (4) the prison system to extract damages and separate dangerous individuals from other possible victims.

Even if the prisons wanted more prisoners, there would be nothing they could do. No more criminalizing extra stuff to make more prisoners. No more extending mandatory minimum sentences; the sentence would be however long it takes to “make the victim whole.”

The only thing that could still cause corruption is coordination between prisons and the courts sending the prisoners there.

This could easily be solved by allowing the prisoners to choose which private prison they go to. This means prisons would have to compete for their labor by offering things like humane conditions, and reasonable rent. Some might even decide to specialize in helping prisoners reach their full earning potential, and thus pay back their victim quicker. Others might allow the prisoners to stay when their term is complete if they would like to keep earning money in the same way they did while in prison.

Of course what I am imagining is an entirely new type of system, where individual responsibility and productivity is incentivized. It wouldn’t look or feel anything like the prisons of today, except for a few special cases of murderers and psychopaths who have no hope of integrating back into society without re-offending.

I’m still not sure why an ice cream shop is putting news on their website, but hey, good for them if they want to take part in a little activism. I just wish they would get to the real scoop instead of whipping up a biased topping for the facts.

“Private” prisons are not really “private” and eliminating them would not solve the issues in the criminal justice system. Only eliminating victimless crimes will substantially reform the rocky road our prison system is on. And after that, it is time to explore truly private prisons, private courts, and private everything else.