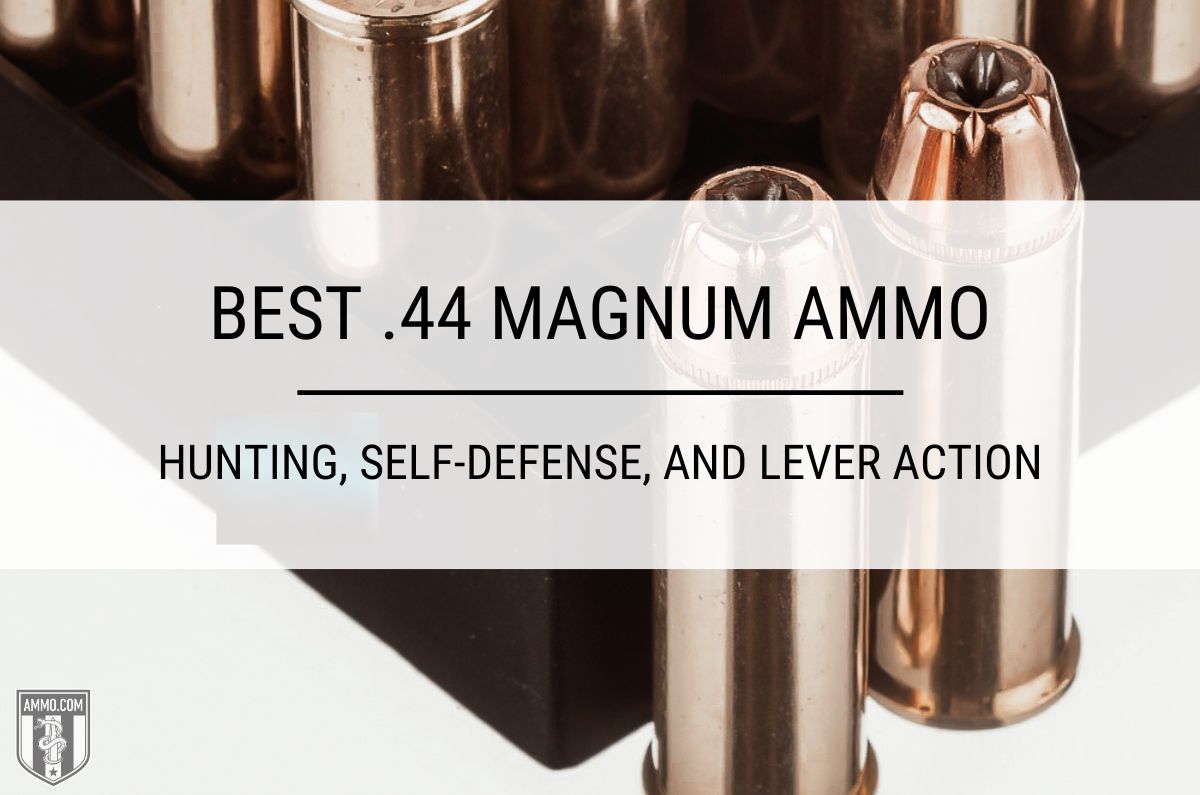 Created by Elmer Keith, the same man who created the 357 Magnum, the 44 Remington Magnum is known for its power and versatility. You wisely want to understand how to maximize both by purchasing the best 44 Mag ammo.

When hunting, stopping power and accuracy matter most. There’s no doubt the 44 magnum round has all the stopping power you’ll need to ethically harvest a black bear, whitetail deer, and feral hogs found across North America.

It’s considered one of the most popular handgun hunting calibers, especially when paired with the best 44 mag hunting ammo. 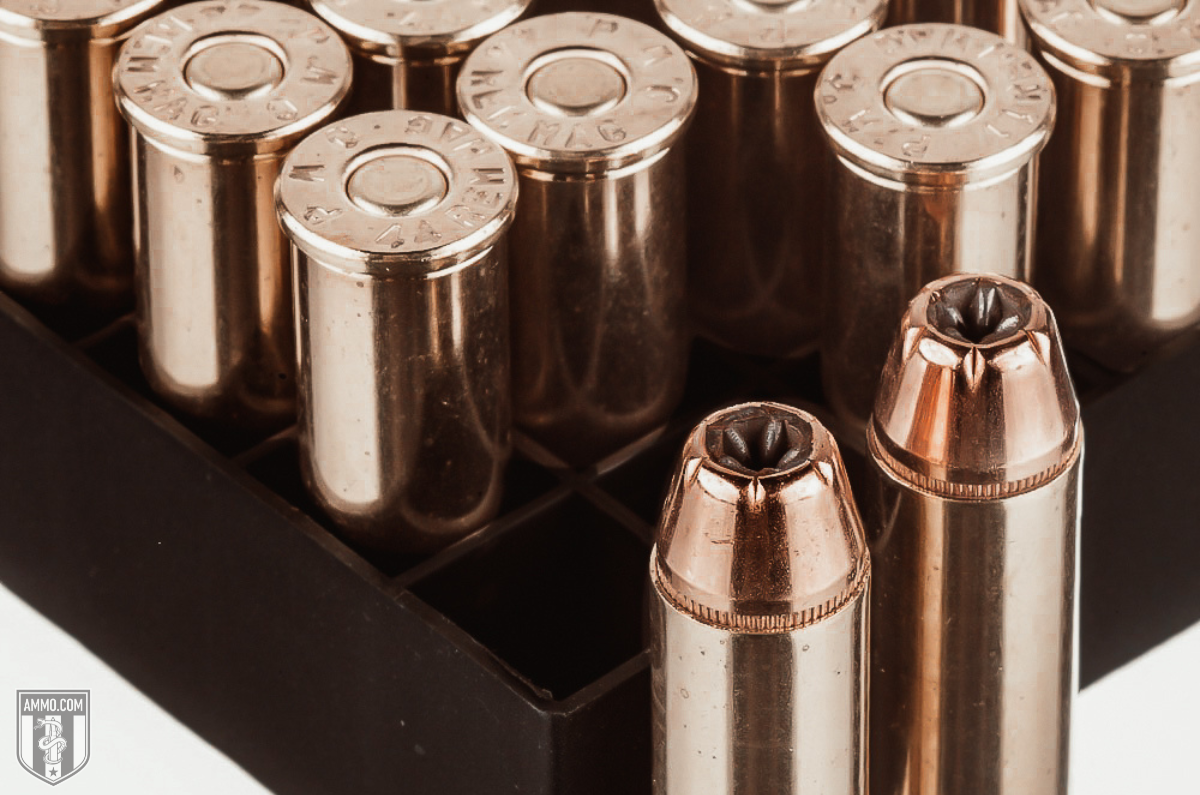 It’s reasonably priced, which means you can practice and sight in your 44 magnum revolver without emptying your wallet.

You can confidently hunt any big game in North America with some of the hardest-hitting 44 Mag ammo on the market when you hunt with Black Hills 240gr JHP 44 Magnum ammo. 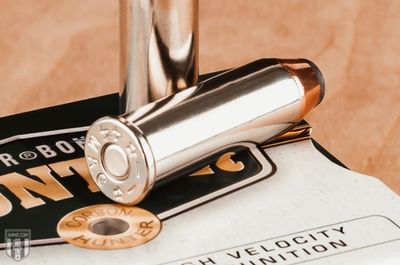 If you’re hunting with a lever-action 44 Mag, I recommend you check out the ammo below because it will likely be the better choice for your situation.

A spitzer bullet has a polymer tip that makes it easier to load in lever guns, is more accurate, and has a higher velocity, all of which are needed for deer hunting.

Self-defense is another everyday use for the 44 Mag. Though most argue it’s a bit much to carry, and I would agree. It’s prone to overpenetration in home defense situations which endangers your family members, and the heavy recoil means the average shooter is somewhat inaccurate. 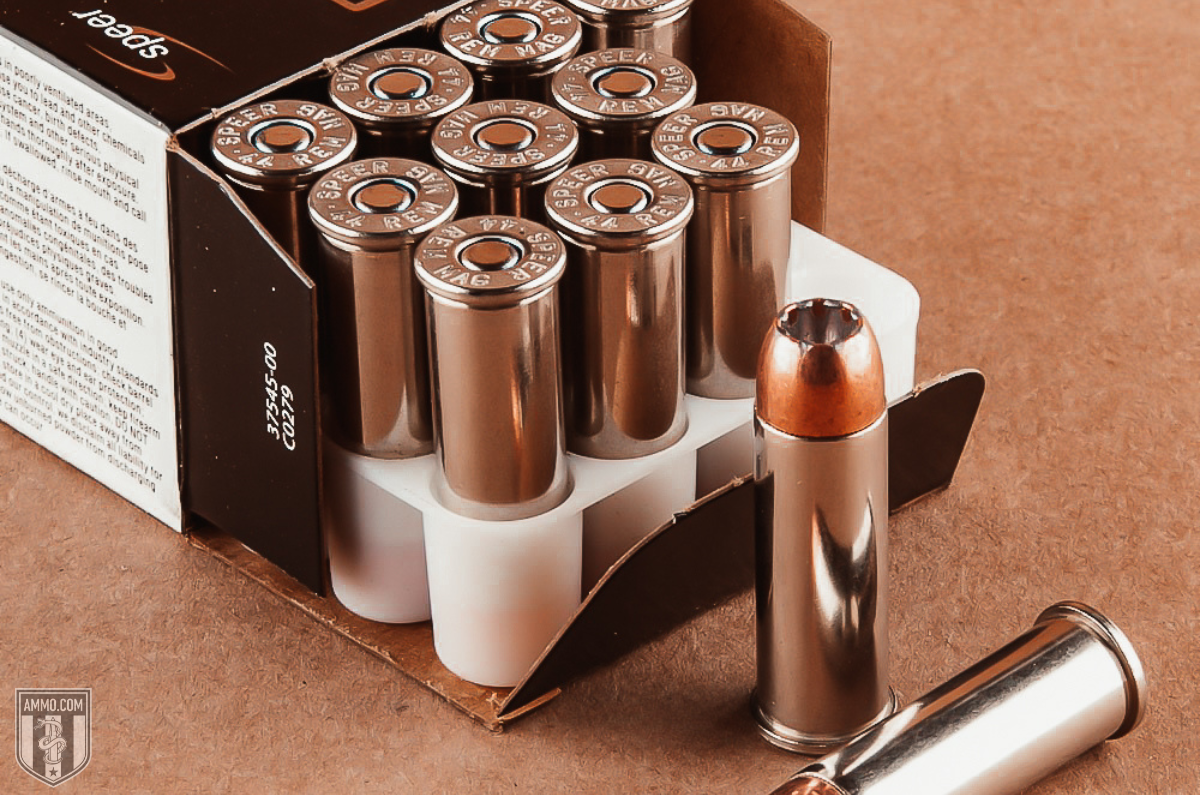 If you’re one of the few that can handle the recoil and don’t have to worry about over-penetration, then the best 44 Mag self-defense ammo is the Buffalo Bore Anti-personnel 180 grain JHP.

The bullets have enough stopping power to stop any two-legged threat, despite being 50gr lighter than the heavier bullets used for hunting.

They can be used in any 44 mag gun, whether a handgun or a rifle. This is a significant pro if you own a 44 mag handgun and rifle because you can focus on protecting yourself and your family instead of ensuring you have the right ammo loaded.

This is the best .44 special ammo for self-defense, and it can be shot from a 44 Magnum revolver. I recommend using this for several reasons.

The first reason is the reduction in recoil, which means increased accuracy. You’ll also have less over-penetration. Lastly, Hornady Critical Defense is one of the best factory loads you can purchase for protecting yourself.

The FTX bullet used for the Critical Defense ammo is an improved version of the Hornady XTP bullet.

If I’m headed to the range to be a hole puncher or make some music with steel targets, I’m not obsessed with getting the peak performance out of a round, so I usually opt for a cheaper round. 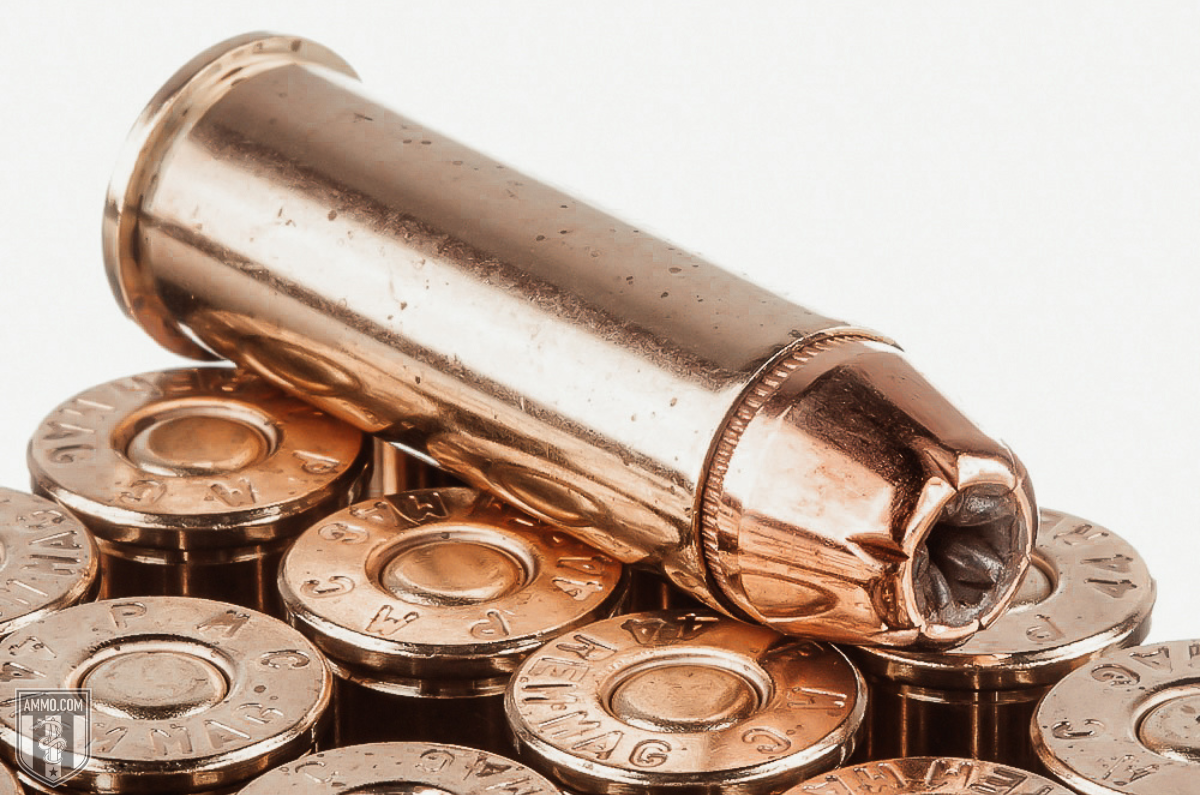 One of the cheapest yet reliable rounds is the Fiocchi 240 Grain Jacketed Soft Point (JSP).

You will need to be more cautious with the soft point in a lever action as they don’t always feed cleanly into the chamber. This will prevent you from shooting quickly and decrease the round’s accuracy.

Suppose you’re looking for another cheap alternative. In that case, the CCI Blazer 240 grain box of 44 Rem Magnum ammunition is a reasonably priced Full Metal Jacket (FMJ) that will feed better into the chamber of a lever action rifle.

One last budget friendly 44 Rem Mag ammo option is PMC 240 grain TC-SP. It packs a heavy punch with a muzzle velocity of 1497 FPS and muzzle energy of 1194 ft-lbs.

Ways to Save More Money on Ammo

Because not target shooting or hunting is not an option, we must find ways to stretch our hard-earned dollars.

An excellent way for the average target shooting enthusiast to save more money on ammo is by buying bulk 44 Mag ammo. This will allow you to do a lot of plinking and stock up when you need to, but it does mean you’ll need to cough up more money upfront.

Once you’ve shot the ammo, save the brass because you can also save money by reloading the 44 Mag brass.

The jacketed hollow point (JHP) is designed to expand rapidly when it hits the target. This increases the amount of damage the bullet creates and decreases the chances of over-penetration.

There are two main advantages of shooting a jacketed bullet. Number one is that it feeds better in semi-auto pistols, and the other advantage is less lead fouling in your barrel.

The soft point bullet is primarily used for hunting where hollow points are banned because the nose deformation expands slower and penetrates more than a hollow point of the same caliber.

It’s typically not the first choice for long-range hunting, but at close to medium ranges, these bullets are devastating, with similar performance to hollow points.

The semi-jacketed soft point (SJSP) is a hollow point alternative. It has an exposed lead soft point that reliably expands on impact and offers deeper penetration than your average hollow point. An FMJ bullet is designed to keep its shape, while an SJSP is designed to deform and transfer more energy to the target.

It’s primarily designed for revolvers; however, some bullets are intended for use in rifles. It can be used for almost any application, such as home defense, big game hunting, target shooting, and more.

The bullet is jacketed around the 1/2 or 1/3 mark, exposing the lead nose. Jacketed soft points are primarily intended to be hunting rounds that are more common in rifles than pistols.

As I mentioned earlier, gun writer Elmer Keith is the man credited with bringing the .44 Remington Magnum to life with the help of firearms manufacturer Smith & Wesson and ammo maker Remington Arms Company.

The most surprising fact is that Smith & Wesson was not the first company to release a firearm chambered in .44 Mag. That would be the Sturm, Ruger & Company, thanks to an observant employee who found the spent casings and deduced their competitors were creating a new round.

Though the Ruger Blackhawk was initially more popular because it was less expensive, the Smith & Wesson Model 29 starred in Dirty Harry, one of the most popular movies of 1971, alongside Clint Eastwood.

This role made the Model 29 one of the most sought-after guns of the 1970s and helped ignite the obsession with “the most powerful handgun in the world.”

Because of its popularity, many other firearms manufacturers made a handgun, rifle, or carbine chambered in .44 Magnum, such as Henry, Winchester USA, Colt, Ruger, and Smith & Wesson.

Due to the nature of the bullet, most handguns are revolvers; however, there are semi-automatic pistols chambered in 44 Mag, such as the Desert Eagle. This is the same reasoning behind the high volume of single-shot and lever action carbines and rifles compared to semi-auto rifles.

Note: This information comes from the manufacturer and is for informational purposes only. The actual ballistics obtained with your firearm can vary considerably from the advertised ballistics. Also, ballistics can vary from lot to lot with the same brand and type load.

The best 44 Mag ammo for hunting is the Black Hills 240 Grain or the Hornady Leverevolution 225gr.

While I wouldn’t recommend carrying a .44 Mag with you for self-defense, if you do, I would use Hornady Critical Defense .44 Special because of its reduced recoil, and it is safe to shoot in .44 Mag revolvers.

The best budget-friendly .44 mag ammo is the Fiocchi 240 Grain.

That finishes out the best .44 Magnum ammo list! I look forward to seeing you at the range someday soon.