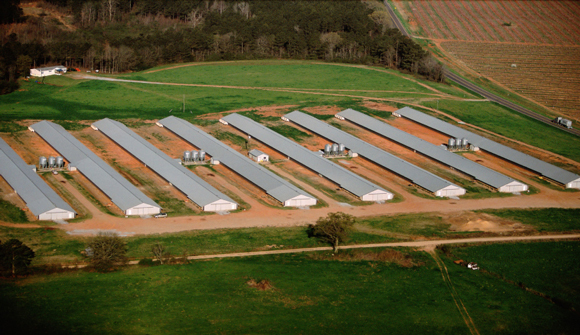 New Aerial Photos Suggest Big Organic Farmers May Be Lying to Us … Consumers of organic eggs and milk like knowing that the cows and chickens on organic farms are treated decently. Many people count on the fact that these animals are required to get a certain amount of time in the great outdoors. They're not supposed to be kept indoors round the clock in classic factory farm fashion. Unfortunately, one watchdog group called the Cornucopia Institute says the biggest organic farms aren't bothering to follow the rules. They're getting too big to be able to even try. In fact, they're turning into… factory farms. – Care2

Free-Market Analysis: We've written about "organic" food because it's a "hot" trend.

But we've also wondered whether the corporate farming model can adapt to organic approaches. We wrote about some of those issues here:

Consumers might eventually turn to regional food producers, we speculated, because these operations inspired more confidence in "natural' food production than the big multinationals.

Now, in this article, we can see Big Farming seems to be struggling to incorporate "organic approaches" with business-as-usual.

[C]onsumers, who rightly assume that the animals producing their food are being treated respectfully, and consequently resulting in higher quality food, are being taken advantage of in the marketplace.

Why is this so? Take a gander at the aerial photographs the Cornucopia Institute took earlier in 2014 of 14 major organic diary and chicken farms. See large numbers of animals enjoying the sun and air? No? That's a problem. Potentially, that's a rather important violation of the U.S. Department of Agriculture's (USDA) organic certification.

"The federal organic regulations make it very clear that all organic livestock must have access to the outdoors and that ruminants, like dairy cows, must have access to pasture," said Mark A. Kastel, Senior Farm Policy Analyst and co-founder of the Cornucopia Institute.

… Organic livestock must be "raised in a way that accommodates their health and natural behavior," according to the USDA. Outside the grazing season, according to the rules, dairy cows must have free access to the outdoors year-round except under specified conditions, such as inclement weather.

At its heart, the USDA's organic label as it applies to farmed animals makes mandatory "access to pasture," which includes "access to the outside, direct sunlight, fresh air and freedom of movement." The Cornucopia Institute insists that many of the biggest organic dairy and egg farms aren't complying, to the economic detriment of smaller family farmers who do.

… Based on its investigation, the Cornucopia Institute has filed complaints against all 14 large farms with the USDA. This will be a matter worth watching for anyone who cares about the welfare of farmed animals as well as the organic label and what it stands for.

The expanding fight over the definition of organic food, as well as its production, will define the industry for years to come. In this instance, the Big Farm model may actually be operating under a disadvantage.

Big farming depended in part on the "miracle" of the Green Revolution. But "green" farming has depleted soils around the world and the organic approach to farming is gaining acceptance. Adapting Big Farm techniques to organic farming is not a simple task.

The challenges facing an "organic" approach to farming are twofold. First of all, regulators may expand the definition of "organic" in questionable ways to satisfy powerful political influences.

The second challenge is that the sector may become controversial as larger and larger players enter the arena. Adapting Big Farm techniques to organic farming may have many pitfalls, as this article shows.

We've previously speculated that organic farming may carve out a new farming niche that proves inhospitable to large-scale growing practices. Alternatively, organic farming may in a sense be legislated out of existence as Big Farm practices are endorsed both locally and on a federal level.

This "hot" sector will probably see a good deal more controversy and confrontation as it evolves.