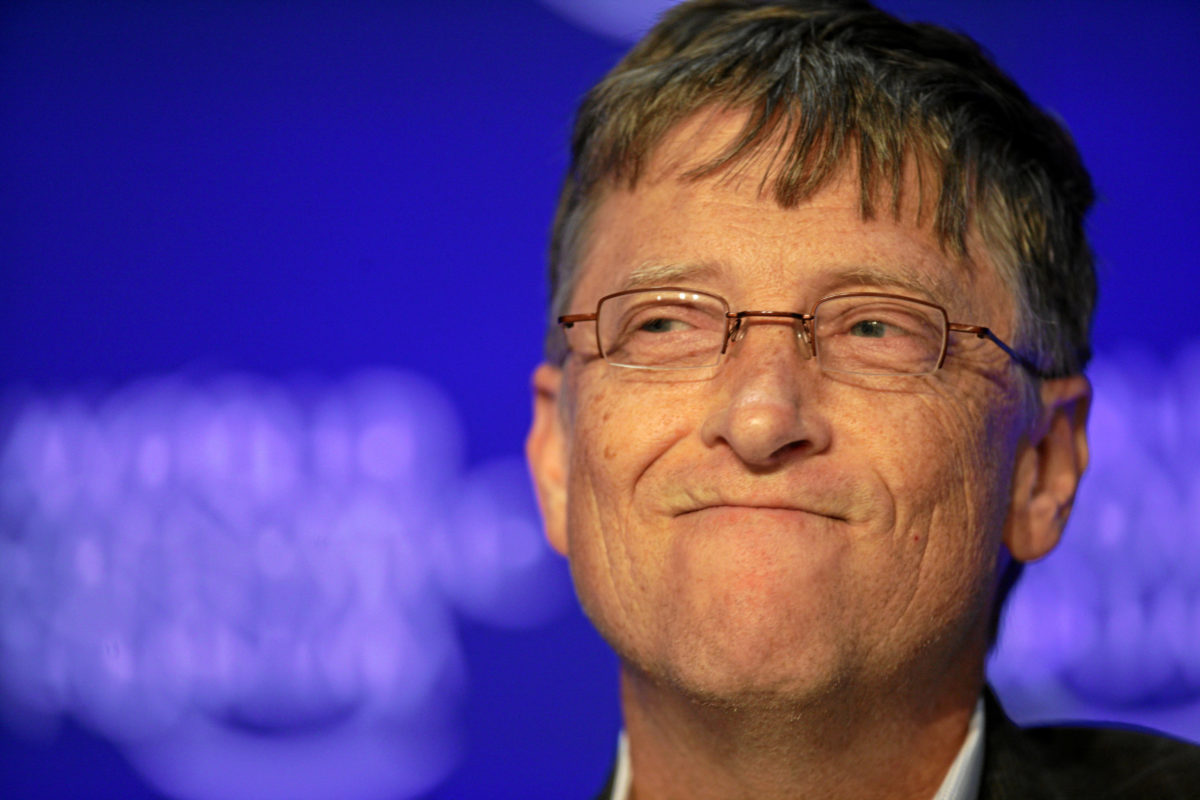 STAFF NEWS & ANALYSIS
Bill Gates is an Authoritarian Sociopath Masquerading as a Heroic Nerd
By Ben Bartee - May 19, 2020

As the counterfeit nerd-hero of the authoritarian left, Gates has ascended to the top the amorphous globalist social hierarchy. He has joined the ranks of craven authoritarian despots like Xi Jinping and CIA stooge John Brennan in stature and influence.

Gates’ bread and butter in the social manipulation game is his slightly effeminate demeanor, coupled with an assuming pair of scholarly-looking spectacles. No psychopath has ever profited from the “nice guy benefit of the doubt” as lucratively as professional con artist Bill Gates.

For psychological and sociological reasons that we’ll begin to explore, the public generally gives the good-guy benefit of the doubt to nerds – the default assumption being that they don’t lie or scheme. Through the furnace of social ostracization and ridicule, they are believed to have forged an iron compassion that they carry on in their altruistic pursuits for the greater good.

American pop culture is filled to the brim with the archetype of the spirited pocket protector-clad nerd with a can-do attitude – an unexpected hero in times of trouble.

People, often desperately, desire someone or something – anything, in the face of creeping nihilism that penetrates our collective psyches — to believe in. Hollywood assures them through screenplay that the savior they’ve been looking for is really just the neighborhood nerd. Enter Peter Parker: one part helpful nerd, one part spider, 100% hero. Enter Hermione Granger from the wild world of wizarding: one part sex puppet, one part book-toting witch scholar, and, also, 100% hero.

Enter Bill Gates, the bespectacled bastion of wisdom that we are now expected to ritually obey in this time of crisis.  When he isn’t giving polio to impoverished African children in the form of oral vaccines, he dispenses his philanthropy in the form of instructions about how the American peasantry should live life.

The corporate media expects to grovel in gratitude when Gates tell us how to be more of a hero like him: “We make the future sustainable when we invest in the poor, not when we insist on their suffering.”

How enlightened! What progressive entity in the historical record could have thought of creating a better future through the alleviation of suffering – well, other than Jesus, the Buddha, Mahatma Gandhi, Jordan Peterson, Mother Teresa, that guy from U2, other billionaires like Mike Bloomberg who need good PR for their political campaigns, the Prophet Mohammed when he wasn’t beheading his enemies, Karl Marx, every American who has ever volunteered in a soup kitchen, etc.

Bear in mind — despite Bill’s obscene, continual roll-out onto corporate media to condescend to Americans about what they need to do to act right in times of crisis – that he has no medical training at all. None. Bill Gates is probably not even certified to practice CPR on a choking victim. In college, Bill studied pre-law for two years before dropping out and never returning.

Which begs the question:  what explanations, other than decadent celebrity worship and social control, exist for why a non-scientist like Bill Gates appears on national television seemingly daily? There he is, smiling paternally like a kindly old father/young grandfather type who just wants the best for his people or whatever, dispensing medical advice while raptured news actors who — fists on chins — hang onto his every word as if God were dictating scripture.

The answer to how Bill Gates is on television each day– talking to uncritical, sycophantic “journalists” who will later parrot his talking points as if they heard them from an actual doctor– is that Bill Gates has hundreds of billions of dollars. And he knows how to spend it propagandizing the well-intentioned American public. D.C. elites, in concert with the deep state and Silicon Valley, working to achieve their collective technocratic social control aspirations, have invested in that message.

In 2020, corporate news producers and “talent” (loosely defined) like soulless CNN star Don Lemon are craven cucks to power who will talk to anyone with a Bombardier BD-700 Global Express, an agenda that squares with the establishment’s technocratic social control agenda, and an appetite for on-air ego-stroking from what are essentially overpaid corporate prostitutes playing journalists for one or two hours a day on TV.

Walter Cronkite, muckraking journalist with an appetite for the hard truth, no matter how painful, and Don Lemon, millenial-ish semi-literate aspirational pop star who somehow got hired by once-credible news outlet CNN to sincerely speculate on primetime television that a missing plane actually flew into a black hole.

When a monster like Gates comes along who wants to desecrate America’s once-vibrant heartland even further with never-ending shutdowns and forced control of movement and brand-new powers for Silicon Valley tech firms to censor information – all while pretending to help – of course MSNBC is going to book him whenever he wants.

If you have ever suffered under the illusion that Bill Gates’ “charitable” work was all just a labor of love for an aging billionaire with a lot of free time and a big heart, you could be forgiven – that’s what millions of dollars poured into public relations propaganda do.

The truth, as Microsoft’s co-founder Paul Allen puts it, is that Bill Gates is a “ruthless schemer” who learned somewhere along his developmental path that pretending to be a bright-eyed helpful nerd is the perfect rouse to hoodwink people who want to believe in the best of people. Bill’s “philanthropic” work is a charade to grasp at more power and wealth.

When you flip the channel or glimpse the news of the day to find Bill Gates condescending to you, remember that — to him — you are a mark. An easy target. Bill Gates banks on well-intentioned, normal Americans being naïve enough to not see the darkness covered up by his superhero nerd routine.

As the timeless adage of Tyler Durden goes, “putting feathers in your butt does not make you a chicken.” Bill gates is no kind of scientist, nobody’s bespectacled nerd savior, and no philanthropist in any meaningful sense of the word.