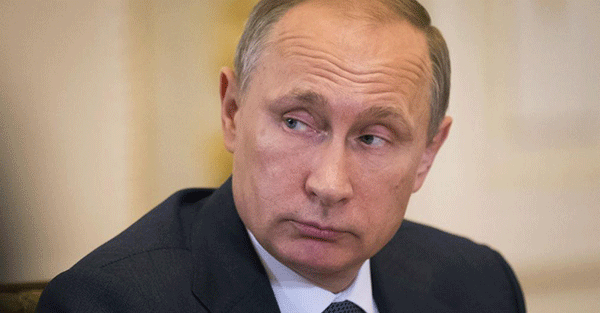 STAFF NEWS & ANALYSIS
Blaming Russia and Virtue Signaling Is All the Democrats Have Left
By Ben Bartee - September 18, 2020

In 2020, all the DNC has left to offer voters is rebooted McCarthyistic Cold War hysteria and stale woke virtue signaling.

The Democratic Party of the New Deal Roosevelt era is dead and buried. Whereas the democrats of the now-historical era once represented (or made an effort to pretend to represent) the interests of the working class in the form of labor union support, federal jobs programs and even (unthinkable now) nominal support for universal healthcare, that’s all gone.

As overpaid DNC mouthpiece of Pizzagate fame  John Podesta puts it, the DNC now “leads with its values” —  a sufficiently vague phrase that intentionally means nothing.

The “values” scam is so overproduced that virtually no one — save the most ardent “Blue No Matter Who” sycophants – buys the propaganda any longer. The human stomach can tolerate only so much vomit-inducing, utterly substanceless politician-speak.

Listen to any Beto O’Rourke or Mayor Pete stump speech and the pseudo-inspirational 90’s-style rhetoric will be on full display. “We come together with our shared values to promote the dignity of our citizenry and hold hands to unite in favor of the best of us… hope… values. Please clap.”

Utterly amazingly, speech writers get paid to write this style of vapid word-salad that a five-year old playing with refrigerator magnets would do for free on a boring afternoon.

National-level democratic politicians on the corporate dole, like their GOP counterparts, simply have nothing left to run on besides nonsense; they don’t believe in anything.

More accurately, they get appointed to positions of influence and their campaigns financed in exchange for not believing in anything.

They won’t run on healthcare for all because their health insurance owners won’t let them.

They won’t ever conclude the mind-boggling wars in the Middle East that have raged for decades with no end in sight because their owners in Raytheon and Boeing make too much money. Ditto for the ongoing US-backed Saudi genocide in Yemen.

They won’t reign in the criminals on Wall Street because their Manhattan puppet masters might not send that check next election cycle or, if they push hard enough, they might just get Epsteined.

There’s simply nothing of substance they are allowed to discuss.

So, instead, it’s tried-and-true Russia-baiting and slimy social justice posturing 24-7.

A couple of months ago, the ghouls in corporate media began pushing deep-state talking points that for some reason Russia – which is notoriously strapped for cash (largely due to US and its allies’ sanctions over the Russiagate hoax) and barely able to maintain a functional government – decided to begin paying bounties to Russian assets in the field in Afghanistan in exchange for dead soldiers.

The opening line of the New York Times’ stenographic propaganda piece on behalf of the CIA reads:

“American intelligence officials have concluded that a Russian military intelligence unit secretly offered bounties to Taliban-linked militants for killing coalition forces in Afghanistan — including targeting American troops — amid the peace talks to end the long-running war there, according to officials briefed on the matter.”

Check out the sleazy weasel language in the opening sentence alone:  “American intelligence officials” – the same class that outright fabricated claims it knew to be false about mythical WMD in Iraq to start a decades-long war to make money for their internationalist overlords – “concluded” that Russia paid Taliban militants to kill Americans – all according to nameless, faceless “officials briefed on the matter.”

Habeus corpus? Where is the body? Consider how stupid the corporate media believes its readers and viewers to be that it would push this narrative with absolutely no corroborating evidence.

These so-called journalists are either too lazy or too incompetent (or both) – with all the resources of the New York Times – to actually corroborate any of the claims spoon-fed to them by spooks in the CIA, preferring instead to parrot them like the lapdogs that they are.

Most recently, tireless architect of the Russiagate narrative Adam Schiff, representative from the great state of California, who has not stopped peddling his owners’ favorite conspiracy theory since 2016, melded BLM virtue-signaling and red-baiting into a Unified Grand Pseudo-Woke Master Theory, claiming on national television that Russia – not economic collapse, not abuse of authority, not incitement by opportunistic US politicians – is actually responsible for the mass riots seen in various cities.

“Do you have any reason to believe that Russia is trying to fuel some of the civil unrest in these cities via social media or other methods?”

Well, yes, Dana, naturally Adam Schiff has reason to believe Russia is behind BLM riots. Russia is responsible for everything wrong in the US.

Ever the greaseball, Schiff begins with the obligatory nods to “peaceful protests” in the “best traditions of American democracy” etc. before getting down to the brass tax that CNN president Jeff Zucker really wanted to cover:  Putin did it.

Schiff then knocks Bash’s softball out of the park:

“In terms of what the Russians are doing, the Russians four years ago, Dana, exploited Black Lives Matter. They set up their own false flags online to try to divide people along racial lines. They are once again… doing their best to grow these divisions.”

Aside from the palpable fact that Schiff either doesn’t know what a “false flag” actually is or that he uses the term so casually as to render it meaningless, the drivel is nearly incomprehensible.

Depending on the perspective of whomever is asked, explanations for the mass-riots could be alternately that:

A.) billionaires increased their wealth by more than $600 billion during the pandemic while the American serf class is left to figure out how to pay their rent.

B.) It could be that minority communities have been heavily over-policed for time immemorial.

C.) It could be that weaselly politicians like Adam Schiff fan the flames of racial division as a distraction in the hopes of averting a burgeoning class war.

None of those analyses serve Adam Schiff’s, Bill Gates’, Jeff Bezos’, or Dana Bash’s interests, though, so instead it’s Russophobia and SJW gibberish all day long.