Lots of them do awesome things every day, like Alex Jones or Tim Dillon.

Besides, there’s no shortage of other categories of people to legitimately hate.

That said, fat propagandists box me into a corner when they insist that fat is beautiful — despite all evolutionary, physical, psychological, and cultural indications to the contrary. I’m forced to disagree, and consequently get pigeonholed as a fatphobe.

It’s all very unfair (to me), yet my hands are tied.

Fitness, like anything healthy, is now ‘right-wing’, championed by ‘white supremacists’

“The intersection of extremism and fitness leans into a shared obsession with the male body, training, masculinity, testosterone, strength and competition.”

Apparently “strength” is now exclusively the domain of the right-wing? If only that were so, maybe the purge would be easier.

Alas, the corporate state has the woke military on its side (for now), so we’re going to need more than bulging muscles to run up against the military-industrial complex.

“A New York cattle ranch has apologized after one of its employees posted a TikTok video saying an influencer was not allowed to ride a horse… TikTok influencer Remi Bader, who has 2.1 million followers, initially posted a complaint about the ranch in a TikTok of her own on June 11. The video showed the ranch’s buildings and an on-screen caption that read, ‘Shoutout to Deep Hollow Ranch in Montauk for making me leave because I weigh over 240.'”

This is a classic case of #FirstWorldProblems. African children are currently starving by the millions thanks to COVID lockdowns.

This TikTok star, on the other hand, obviously has plenty on her plate – too much, by all appearances. Her major issue is that she can’t abuse horses by forcing them to port her from here to there for her personal entertainment.

These people would literally sacrifice the health of an innocent animal by forcing it to bear the weight of a human-walrus hybrid, just for the sake of “body positivity.”

Where are the animal rights people on this issue? If the fat supremacists got their way, poor horses everywhere would get their backs broken just so dude ranch owners wouldn’t have to issue public apologies after getting torched on social media.

Apparently, in order to avoid shame, obese women are literally flashing victimhood cards at doctors’ offices so as to preempt healthcare providers from discussing the elephant in the room – their morbid obesity.

Thank God, because fat-shaming among doctors is out of control:

“The problem is so widespread around the world that health professionals need to be taught as students that excess weight is almost guaranteed in modern society and not the fault of individuals, so they treat people more sensitively, according to the authors of the study, who have shared their findings with the Guardian.” 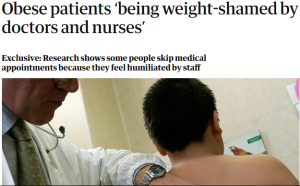 Above: How about they stop skipping medical appointments and start skipping their daily Golden Corral feedings? Source: The Guardian 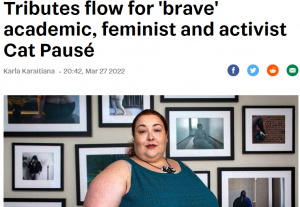 “Massey University’s Institute of Education lecturer and fat activist Cat Pausé was a well known fat studies’ researcher, focusing on the effects of spoiled identities on the health and well-being of fat individuals… There is the whole feminism side of things and race had a lot to do with what she did as well. She had fingers in many pies and a big influence on all of them.” (lol)

Among other serious scholarly works, Pausé published the seminal Live to Tell: Coming Out as Fat, a title which she might have been well-advised to rethink given her untimely departure from the Earth.

Details of the cause of death are sparse in media reports, other than to claim that she mysteriously died in her sleep. She was 42, a full 30+ years younger than the average (shrinking) lifespan in the West. Do with that information what you will.

The rampant sense of entitlement among the human-walrus hybrids staggers the moral conscience.

Healthcare providers are now expected to apologize to their patients when they’re too enormous to fit inside of an MRI machine, as if they were the ones who shoveled girl scout cookies down their face-holes for decades.

No: You are too big for the MRI machine

Yes: I'm so sorry that this MRI wasn't built to accommodate you, let's look at other options for getting the information we need.

If you’ve never had an MRI, understand that their diameter spans several feet. Conventional MRIs (the smallest kind) are 60 cm (2 ft.) wide. 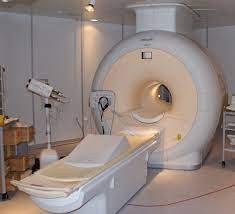 Not fitting inside of one should rightly be taken as a major red flag – not an opportunity to flex your moral outrage on social media. You don’t need magnetic resonance imaging for that diagnosis: abnormally fat.

The charm of living in Asia is that the natives refuse to walk on eggshells around cultural issues that are taboo in the West. If you’re fat, they’ll simply point it out as a matter of fact – without malice, but also without apology.

They don’t hate fat people; rather, they naturally and understandably find the really big ones funny due to their unusual appearance, in the same way that a hairy woman or a giant would have pleased circus crowds in a simpler American time, before “rights” activists killed the joy.

Asians are somewhat autistic in this regard: they don’t play the same Western games of “empathy” that actually just serve to provide social cover for unhealthy and/or deviant lifestyle practices. 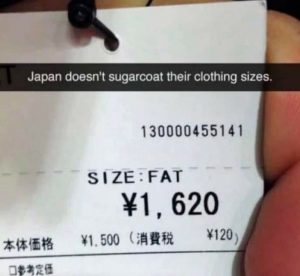 Sometimes, I imagine the sorts of daily, regular meltdowns that SJWs would experience if they ever relocated from Portland to Bangkok and were forced to negotiate life in a world uninterested in indulging their various neuroses. I close my eyes to envision the scene, and am filled with gleeful warmth.