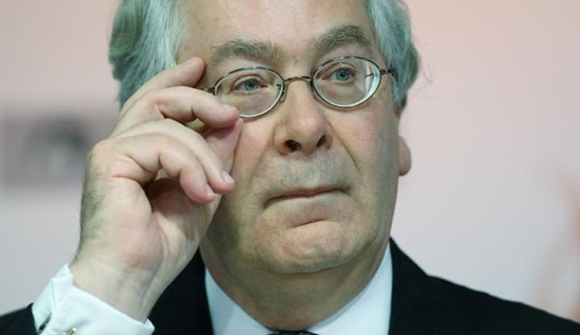 “Europe’s deep economic malaise is the result of “deliberate” policy choices made by EU elites, according to the former governor of the Bank of England.” –UK Telegraph

One of the world’s most important central bankers, Mervyn King, has finally decided to tell the world what we’ve been reporting for years: Europe’s agonizing depression is deliberate.

The creation and the implementation of the euro was not in any sense what it seemed to be. In fact, it shows how deep elite schemes run and how cleverly they manipulate the media and “useful idiots” to serve their purposes.

The conversion to the euro was widely celebrated in Europe. Europeans were happy to scrap currencies that had lasted for hundreds and even thousands of years for this new bureaucratic invention.

In retrospect, it must seem like a destructive monetary wind swept over Europe, leaving behind seeds that would bear bitter fruit.

DB readers knew long ago. Here’s one of our articles on the subject from early 2012, entitled, “EU’s Prodi Admits Leaders Knew Euro Would Cause Ruin but Hoped Political Union Would Follow.”

We quoted Euronews as follows:

The Flowers that Launched the Euro … To mark the anniversary of the arrival of the euro in the form of notes and coins, Euronews spoke with Romano Prodi, who in 2002 was President of the European Commission ….

Prodi: “Well, the difficult moments were predictable. When we created the euro, my objection, as an economist (and I talked about it with Kohl and with all the heads of government) was: how can we have a common currency without shared financial, economical and political pillars?

The wise answer was: for the moment we’ve made this leap forward. The rest will follow …

And so of course, the “rest” did follow. Greece, Spain, France, Italy and other Eurozone countries collapsed in various ways because local governments could not debase their currencies as they’d done in the past.

When the EU converted en masse to euros, that flexibility disappeared. Now the European Central Bank would make inflationary decisions and Europe was split down the middle. Germany especially didn’t want a lot of monetary inflation, and Germany was Europe’s biggest industrial engine.

And thus Southern Europe, with a different kind of culture and corruption, collapsed into a depression that continues to this day – with all the human agony that such depressions contain.

But let’s focus on slightly cheerier things in welcoming Mervyn King to the revisionist fold.

In his words via the Telegraph:

Speaking at the launch of his new book, Lord King said he could never have envisaged an economic collapse of the depths of the 1930s returning to Europe’s shores in the modern age. The fate of Greece since 2009 – which has suffered a contraction eclipsing the US depression in the inter-war years – was an “appalling” example of economic policy failure, he told an audience at the London School of Economics … “It … has happened almost as a deliberate act of policy which makes it even worse.”

Good for him. Sure, he isn’t quite admitting the full truth about EU manipulation but he’s coming close. He states quite clearly that Eurocrats are creating depressions in various countries via “austerity.”

Indeed they are. In fact, it is just as Prodi said: The top Eurocrats intend to make Europe as miserable as possible. Once the masses are stripped of wealth and hope, only then are the top EU actors going to launch the penultimate public campaign for a politically integrated EU.

King even suggests scrapping the euro currency to save the EU! He says if it is not scrapped, “disillusion” is likely to lead to disintegration anyway.

Unfortunately, this is the end of the positive news regarding the book from what we can tell. (We haven’t read the book.) His truth-telling, according to the Telegraph, unwinds into the usual central bank gobbledygook.

Once monetary (central bank) policy straightens out, the 21st century is headed into a golden age of research and innovation, he forecasts. Even worse: What central bankers need to do internationally is to find a “proper balance between spending and saving, exports and consumption.”

Ugh. A handful of well-fed men in elegant conference rooms meeting on regular occasions to fix the value and volume of money cannot possibly find a “proper balance” for any part of the monetary system. Most of them can’t even “balance” their own weight.

All they can do is fix prices. And price-fixing never works. Economics 101. Human judgment is no competition for market pricing.

And just like the euro, its destruction is deliberate.

The idea is to make not just Europeans but people around the world so miserable that they will welcome ever-closer global government.

As we try to keep ourselves and our families prosperous and safe, we should keep in mind that almost everything we hear and read in the mainstream media is propaganda. Question everything, and concentrate on practical realities.

Conclusion: The depression has been going on in Europe for up to six years. Now someone of high rank has actually admitted that the Euro-elites are deliberately deepening it in places like Greece and Spain. Perhaps at some point people will fight back by casting further light on what’s really going on, and describing it in more detail. Sunshine is the best disinfectant.