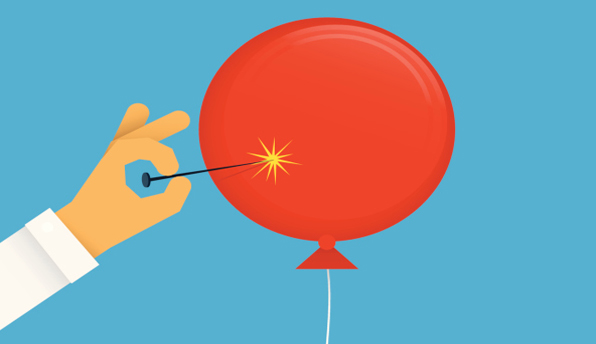 Greenspan says bubbles can't be stopped without 'crunch' … Former Federal Reserve Chairman Alan Greenspan has always been a student of the economy. Since the financial crisis, he's become a student of human nature. Sitting in his office with a view of the Washington Monument in the distance, Greenspan is eager to share the insight distilled in his recent book, "The Map and the Territory," due out in paperback this fall. 'There is definite evidence the economy is picking up. The financial system is finally beginning to lend. But, what we don't know is whether, when the recovery gets underway, it is going to run into another false dawn.' – MarketWatch

Free-Market Analysis: It began with a bizarre statement by Janet Yellen. "Monetary policy faces significant limitations as a tool to promote financial stability," Yellen told an audience at an event put on by the International Monetary Fund.

We covered this announcement via a write-up presented by The Verge in "Shock: Markets to the Moon… as Yellen Prepares for the Biggest Stock Crash Ever."

What Ms. Yellen has said should be plastered on the front page of every English speaking newspaper that still exists. She and her tiny coterie hold the keys to modern monetary power. And she's basically abdicating. She's giving us fair warning that she will continue to print money and that this money will in turn create asset bubbles, as it already is. But she's not going to do much if anything to control them.

Weird, eh? Did you ever think you'd live to see this day? It's like accompanying Alice down the rabbit hole to Wonderland. For those who understand what is actually likely to happen, there's surely an air of unreality – a feeling of being suspended in a mid-air parachute jump with a chute that won't open.

We thought maybe Yellen misspoke; but this is rapidly turning into a meme.

MarketWatch: What was your reaction to Fed Chairwoman Yellen's speech at the IMF, where she said the central bank would use regulation first if there were concerns about asset prices?

Greenspan: There is a fundamental distinction. I happen to agree that bubbles are primarily an issue to be addressed by regulation.

The Fed tried in 1994 to defuse a bubble with monetary policy alone. We called it a boom back then. The terminology has changed, but the phenomenon is the same. We increased the federal funds rate by 300 basis points, and we did indeed stop the nascent stock-market bubble expansion in its tracks. But after we stopped patting ourselves on the back for creating a successful soft landing, it became clear that we hadn't snuffed the bubble out at all. I have always assumed that the ability of the economy to withstand the 300-basis-point tightening revised the market's view of the sustainability of the boom and increased the equilibrium level of the Dow Jones Industrial Average. The dot-com boom resumed.

When bubbles emerge, they take on a life of their own. It is very difficult to stop them, short of a debilitating crunch in the marketplace. The Volcker Fed confronted and defused the huge inflation surge of 1979 but had to confront a sharp economic contraction. Short of that, bubbles have to run their course. Bubbles are functions of unchangeable human nature. The obvious question is how to manage them.

All bubbles expand, and they all collapse. But how they are financed is critical. The dot-com boom [of 1994 to 2000] produced a huge financial collapse with almost no evidence of economic impact. You will be hard pressed to see it in the GDP figures of the early 2000s. Similarly, on Oct. 19, 1987, the Dow Jones Industrial Average fell 23% — an all-time one-day record, then and since. Goldman was contemplating withholding a $700 million payment to Continental Illinois Bank in Chicago scheduled for the Wednesday morning following the crash. In retrospect, had they withheld that payment, the crisis would have been far more disabling. Few remember that crisis because nothing happened as a consequence. But it was the scariest experience I had during my 18 years at the Fed.

In both cases, equity values collapsed, with wrenching losses to the holders of stock, primarily pension and mutual funds and households, none of which were sufficiently debt-leveraged to induce contagious defaults.

It turns out the reason why the more recent housing bubble was so dramatically different was that its toxic assets, subprime mortgages, were out there exposed with very little equity buffer. In a collapse in stock prices with no debt, unleveraged holders get the full impact of the equity loss, but there is no serial contagion. That was not the case in the housing bubble or the highly leveraged stock market of 1929.

So it is not the toxic assets — stocks or subprime mortgages — that matter, but the degree of leverage taken on by the institution that is handling it. Contingent convertible debentures can importantly reduce the risk of serial debt contagion. The debenture debt can be converted to new equity as the overall equity buffer shrinks.

MarketWatch: Some economists argue that the economy has just been bubble after bubble and that we're doomed to repeat this cycle.

Greenspan: Well, I agree with that. I have come to the conclusion that bubbles, as I noted, are a function of human nature. We don't have enough observations, but my tentative hypothesis to what we're dealing with is that both a necessary and sufficient condition for the emergence of a bubble is a protracted period of stable economic activity at low inflation. So it is a very difficult policy problem. I do believe that central banks that believe they can quell bubbles are living in a state of unrealism.

This last answer is especially noteworthy. Bubbles are simply a function of human nature, according to Greenspan. And not all bubbles are dangerous and even if they are, the way to deal with them – according to Yellen – is not via monetary policy but regulation.

Why make such a crazy argument? Modern-day central bankers are evidently very uncomfortable discussing the effects of monetary policy. This is because once one starts to discuss the effects of money, one inevitably begins to examine the quantity theory of money and this leads inexorably to an examination of how money is actually created and what it is – and is not.

This is a debate that has been raging with increased fierceness for the past decade – as the Internet itself has allowed the resurgence of the one economic discipline that actually makes some sense … Austrian economics.

In the 20th century, Austrian economics was repressed by the strategy of presenting it (badly) alongside Marxist economics, the Fresh Water School, etc. Everybody got the same amount of coverage; a chapter was devoted to each theory as if one were just as valid as another.

And of course, only Fabian socialist Keynes got the big ink. That's because HIS theory provided a justification for mercantilist central banks.

It shouldn't have been that way. At its most basic, free-market economics tells us that price competition creates valid prices that can add to people's wealth. The obverse of this – what many other kinds of economics try to explain – is that the government can aid in the price discovery mechanism.

But once one applies government force to price discovery, the price that is discovered is inevitably compromised. This is simple stuff. And valid. Unfortunately, the legions of paid sophists that populate the damaged terrain of non-free-market economics won't accept this.

Social and Mutual Creditors, Anti-Usury types, Keynesians, Friedmanites, Marxian adherents all advocate some sort of interference in the money marketplace and all advocate varying degrees of government monopoly economics. This is because central banks are a fundamental part of modern economies.

Of course, economically speaking, central banks don't make any sense. In the modern era, central banks overprint money, creating first booms and then busts. This is the business-cycle model of economics and since it attacks central banking, supporters of central banking are constantly engaged in counterattacks.

This is happening now as people are beginning to understand that the current central-banking monopoly fiat system is rigged for ruin. It is constantly imploding, constantly centralizing power and constantly putting downward pressure on the middle class.

International elites that have put the current system in place and will defend it unto death are constantly trying to find ways to justify the unjustifiable while attacking perfectly sensible insights inherent in the free-market critique.

Just look at this recent MarketWatch editorial by Ray Nutting:

Conclusion? Maybe there are some bubbles. But before we rush to sell everything we own and march on the Federal Reserve with pitchforks to demand that Federal Reserve Chairwoman Yellen immediately raise interest rates to pop the bubbles, let's consider this question from a contrarian point of view:

What's wrong with bubbles? … Most of the bubbles people talk about today don't pose that sort of risk to the economy. Bubbles that drive the whole economy are bad. Bubbles inflated by trillions in leverage are bad. Bubbles that threaten the stability of the financial system are bad. But bubbles in obscure, isolated markets are nothing to worry about.

It's fashionable to see bubbles everywhere, now that we've seen the damage they can do. Every summer storm is not Katrina or Sandy. And every overvalued asset is not the dot-com bubble or the housing bubble.

Some bubbles are awesome forces that should be feared and respected. And others are just a bit of froth.

Just like Yellen and Greenspan, Nutting wants us to know that bubbles may be benign.

But there IS something to worry about. We write about it all the time: It's what we call The Wall Street Party.

Our central banking controllers, those who want an ever more globalist system, seem determined to push equity markets to new highs … big highs. This may take another year or two or even longer and in the meantime – despite some necessary corrections – fortunes will be made.

But eventually, the party, driven by endless amounts of money-from-nothing, will come to an end. The crash will likely be several magnitudes larger than anything we've seen before.

And out of this chaos, internationalists no doubt hope that a far more consolidated, global economic and financial system will emerge.

It is imperative, therefore, to battle the perception that bubble finance is dangerous. It is, of course, but those behind the bubbles apparently don't want you to think about it.